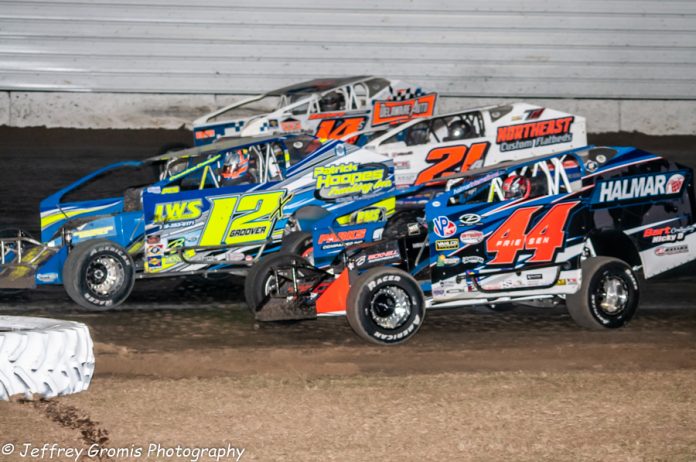 The cross section of drivers for the Short Track Super Series promoted “Sunshine Swing” at All-Tech Raceway was very interesting.

For a show that was 1,500 miles or so from the racers base no one really knew what to expect and I would say it was an artistic success, but it’s up to others to decide if this will happen again even though I have a feeling it very well could.  (editor’s note: It was was reported late on Monday that it will return in 2021)

Northeast Modified shows outside of Volusia have been rare, but Brett Deyo and his team pulled this one off. A super field, a good crowd on the final night, a so-so one one Friday, and a track that really put the “thinking caps” and “chess players” to work.

Was it worth it as a race fan….definitely.

There were all kinds of happenings in the pits and for the fans who didn’t get the chance to head south I’ll try to provide some behind the scenes notes.

Stewart Friesen appeared out of it for the title as Mat Williamson appeared in control at the midpoint of the finale. Mat was second with 25 in and Stew (who had pitted) was 18th. There was definitely passing on this track  On the restart after Schilling’s red on the 39th lap he was sixth.  On the 41st lap he was sixth and just one lap later he was second. Wow, was this fun to watch. He settled for second, but with a first and a first the extra $500 went his way for the title.

Prior to the crash, Schilling looked pretty good all weekend. He was running around the top ten on a regular basis, but the finale was tough. He was eighth at the hallway point and two laps later was up to sixth, but before it was over he had the joined Haers with one of the worst wrecks of the event. He flipped high into the air in turn one, taking down several yards of fencing directly in front of the pit stands. Fortunately, he was okay, but the car suffered extreme damage all the way around.

Ryan Watt vacationed in Florida with his family and Rick Regalski headed to All-Tech from Western PA. The 13 didn’t get in the first two nights and somehow the two linked up and with firesuit in hand, Watt showed up Saturday. The “Electric Company” raced his way into the main via the consi. He finished 10th.

Fourteen-year-old Alex Yankowski had two cars at his disposal, but they were both Mods. On Friday night he qualified only to be smoking throughout the event. In the later stages a huge plume of smoke poured out as he headed off turn two. A burnt gasket was the end result and he was forced to switch to his 420 on Saturday while the 360 needs some engine compartment work. Alex indicated he will run Big Diamond and the small-block division at Orange County.

Tires were going to be the story of the 50 lapper and many elected to pit and run from the rear. Larry Wight in the Simpson 12 pitted (as did numerous others) and despite several scary restarts in the closing stages worked his way back to sixth place. There was one point where Larry and “The Doctor” were Sprint Car “slide-jobbing” one another. It was fun to watch.

The Oxford, N.Y. Rusty Smith (and not the Pennsylvania Rusty Smith) was pitside between features on Friday night and everyone was under the car. They searched and searched and finally found a cracked rear end. He went out and started back in the field to make tow money. Unfortunately, he didn’t make the finale.

Western PA driver Jim Rasey stopped by enroute to his dad’s home in Volusia. He came right out of the box holding off Erick Rudolph for the final redraw spot in his heat. He said, “I wanted to get here earlier, but just couldn’t.”

The track was different, but Rasey said, “I had run the South All Stars and Carolina Clash before and I’ve run a lot of tracks like this. In fact this one is really close to Dublin. I got comfortable and I have a fast car.”

He noted that he had not run American Racers in years.

Drivers knew tires would be a key and usually cars drop off or accidents eliminate competition. However, there were still 27 cars left on the track with 19 laps to go. There was no attrition. Friesen and Billy Pauch Jr., were two guys also coming from pits after tire changes (and in Friesen’s case two pit stops). They noted the restarts were “wild” and in Pauch’s words “shady.” The restarts had fans shaking their heads and jaws dropping. If you go to a track down here on a weekly basis this was quite different.

Dillon Groover started 27th and finished seventh. He said, “The car was good and I took it easy on tires. I probably picked a softer one than most so I just had to be patient. We don’t run many huge shows and to qualify for all three features is pretty good. I just had to keep the tires cool.”

Every time the Mods hit the track BIlly Decker, in the Jeremy Smith owned 91, was among the fastest. However, he just never drew well and it was an uphill battle for him all week long. He put on a show, but never got the feature finish he deserved. The final night he was 11th.

Anthony Perrego passed 20 cars in his heat and there were only 11 cars on the track on Friday night. As the second show started the cars came out to work the track and then were sent right back to the pits where they collected sand and tires became hockey pucks. They had no time to make any changes and the field came out. Perrego started 11th, but took the lead. He got a flat, pitted, went to the rear and won.

On Saturday night Justin Haers was shaking down the big-block he will run at Volusia. It is a brand new car. Haers was sore and bruised after his primary All-Tech car was wiped out on the right side after getting contacted by another car on Friday night. They’ll put it back together, but it will take time. Justin ran at the back of the field in the races he was scheduled to be in to be sure the car would be ready for the Super DIRTcar Series action.

The Delaware based teams brought their cars to the front stretch after warm-ups to salute the passing of long time car owner Jake Marine who was stricken in the pits on Wednesday. Jake had touched so many lives and helped so much to keep guys racing. On the track were Jeff Brown, Kevin Sockriter, Clay Tatman, Scott Hitchens, Adam White, Justin Haers, Larry Wight, Jordan Watson, Rob Dutton and Scott Van Gorder

Andy Bachetti was leading the early stages of the finale when I put my head down to take some notes. The yellow came out, there were no cars stalled on the track, and there was no Bachetti in the lead. He apparently had spun out and I missed it, but he blended back in with the field. Bachetti too had a disappointing weekend.

Billy Dunn in Ray Graham’s car was right there all week long. He was fast early and was right up there in the first two features. He led for 31 laps on Saturday before a right rear tire deflated. He rallied for 13th. I guess that number would be appropriate for the week he had.

Brothers Mike and Tony Ballestero won the first two features on their late dad’s birthday on Friday while Grant Hilfiger won Saturday and the title in 602 Crate Sportsman action.

Brendon Gibbons got upside down as things jammed up between one and two on the final night for the Sportsman.

Payton Talbot didn’t have a bad week as the rookie last year managed sixth in the last race and top tens the other two races.

Just over 30 Sportsman started the week and just 25 remained for the feature on Saturday..

I am sure I missed plenty, but we’ll catch up later one if necessary. Keep your eyes open for a story about the Ballestero’s brothers and their wins on opening night, but the Mod reporting for All-Tech is a wrap.