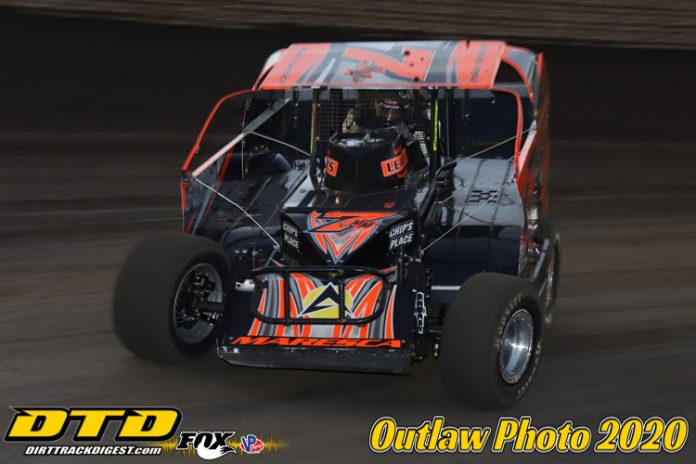 The “Yankee Modifieds” were in the house at Volusia Speedway Park for the first time of 2020 DIRTcar Nationals.

Thirty-six teams made the trek south. Some came over from earlier action at All-Tech Raceway while others made their 2020 racing debut at Volusia.

It took quite some time to get the track race ready as the Modifieds packed the track. The surface was so greasy that officials allowed the first two groups a second opportunity to hot lap.

In warm ups Dillon Steuer slowed dramatically coming off turn two and coasted to a stop.

His crew told DTD, “We just put a new fuel regulator on it and obviously it is not working.”

Steuer came back, didn’t time trial well, but picked up the fifth and final qualifying spot in his heat to move on to the feature.

Tyler Thompson, who earned a starting spot in two main events last year here at Volusia, had a plume of smoke pouring from the right side rear for several laps and it only got worse.

Car owner Jason Simmons told DTD, “We think it is a loose hose on the intake.”

However, in time trials the smoke continued and he didn’t return to the track for his qualifying race. Simmons noted they only had one engine with them, but hoped that if they needed another he could make arrangements with another team.

Jim Rasey nearly lost his race car at All-Tech as he was involved with David Schilling’s wild fence taking down accident. Jim was ready to go tonight and said, “I had to replace a rear bumper and there was cosmetic damage. I looked up to see his belly pan above me and it could have been worse.”

Rasey, out of Ohio, made the haul down as his dad lives in the Orlando area.

“The Doctor” Danny Johnson talked with DTD while his crew thrashed on the right side of the rear end. In typical “Doctor” fashion he noted, “We are working on something, but it is nothing major.”

There were some moments in the heats, but overall the front rows won.

Williamson ran away with the first with Anthony Perrego, Erick Rudolph, Justin Haers and Jeremy Smith making their way in.

Brett Hearn, Rich Laubach and Larry Wight put on a pretty good show as they raced tightly at the front, but that is the way they finished while Jimmy Phelps and Tim Fuller were right behind.

Sheppard and Friesen came to the line side-by-side, but Matt jumped out and Stewart slipped just a big and fell back to fourth where Billy Pauch and Andy Bachetti threatened to shuffle the 44 back. Friesen recovered and started to climb back, but meanwhile Sheppard ran away. Billy Dunn challenged a couple of times, but it was to no avail.

The familiar 9s got the win followed by Dunn, Peter Britten, Pauch and Friesen.

Bachetti flamed up under the engine compartment and drove the car directly to the safety crew in the backstretch.

The fourth and final heat saw Mike Maresca get Decker and they ran that way the entire distance. Ronnie Johnson, Pat Ward and Steuer also qualified.

Last chance showdowns were won by Jessey Mueller and Matt Stangle. Runners up were Kyle Coffey and Bachetti. Third place qualifiers included Dave Rauscher who passed Darwin Greene in the early stages and was never challenged on his return to the driver’s seat. The other final qualifier of the night was Brian Swartzlander.