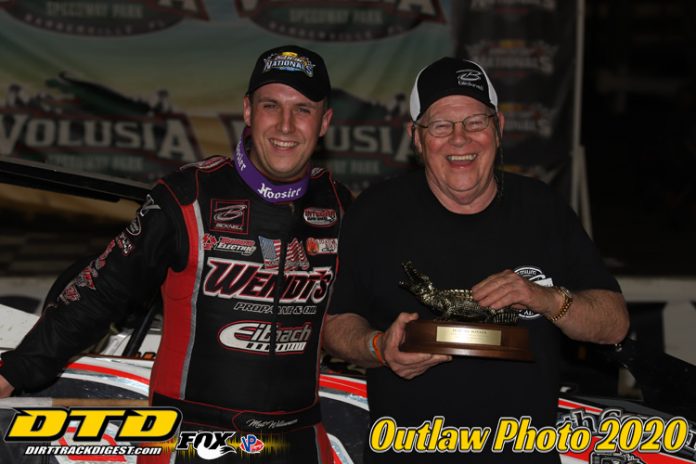 BARBERVILLE, FL – Mat Williamson picked up 2020 right where he left off in 2019, leading the way at the start Super DIRTcar Series season at Volusia.

“We weren’t spectacular here last year, so to come to Florida and win is real cool,” stated Williamson.  “We are starting off way better than we did last year. We’ll definitely be enjoying this one.”

Behind him, Brett Hearn and Matt Sheppard battled, with Hearn besting Sheppard in the opening laps, but Sheppard fought back to take second with three laps in.

Hearn wasn’t going away yet, keeping pressure on Sheppard, but soon found pressure of his own from Erick Rudolph. By lap eight, the battle for second became a three-car fight, with Rudolph clawing by both and into the runner-up spot on lap nine.

Following in Rudolph’s tire tracks was Anthony Perrego, disposing of Sheppard to get to third at the lap ten mark. As Perrego inched in on Rudolph, both were catching Williamson.

“We got lucky with that caution, and my guys in the infield were telling me to go to the bottom,” Williamson said. “But, I wasn’t sure where exactly to go, and I got lucky with the yellow and it gave me a chance to think of what to do.

On the restart, Rudolph nearly stole the top spot from Williamson, but Williamson throttled down and pulled away. Perrego stayed with Rudolph, and those two continued to battle as they did before the caution, just without Williamson as Williamson had opened up a second and a half lead with ten laps to go.

As the lap counter hit 25, the front-runners stabilized in their respective spots, with the highlight being Friesen taking fourth from Wight after a charge from 19th. Williamson had lapped traffic in the final circuits, but worked it flawlessly and did not give Rudolph any chance to close in.

Meanwhile, Perrego made one final run at Rudolph, but ran out of time, as Williamson claimed the first Super DIRTcar Series win of the season, leading wire-to-wire at Volusia.

Rudolph had the second-most wins on the Super DIRTcar Series tour last season with four, ahead of Williamson’s three and behind Sheppard’s eight. Rudolph almost got into the win column in February, but came up short.

“We got to second quick and kind of fizzled out a bit,” noted Rudolph. “After that restart he took off and got a buffer on me, and I just wasn’t able to get to him. I think this is my best run here so hopefully we’ll get a gator sometime this week.”

Perrego came down to Volusia with the team he competes with at Orange County Fair Speedway. While he had a shot at the win around halfway, Perrego had to settle for third.

“It was a good run racing against those two cats,” Perrego said. “Before the yellow I thought I had something, but under the yellow someone knocked water on the track in turn three and I lost my line. Right before that yellow I think I had them both, but we just weren’t perfect afterwards.”

Friesen crossed the line in the fourth position while Wight came home fifth.