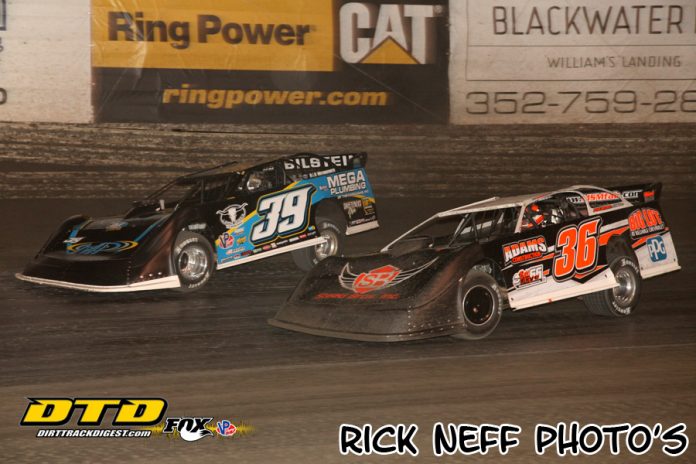 BARBERVILLE, FL – When a new driver-owner partnership comes about for the beginning of a new season, there’s normally a learning curve that each team member goes through before getting settled. In the case of Tim McCreadie, however, he and his new team at Paylor Motorsports made it look like they’ve been together for years as they scored a dominating victory in Tuesday night’s DIRTcar Late Model Feature at Volusia Speedway Park as part of the 49th DIRTcar Nationals presented by Bozard Ford.

“I owe a lot to [car owners] Gena and Donald Bradsher,” McCreadie said. “They didn’t have to do this, and we’re reaping the benefits of it as a team. We’ve got a really, really good team, everybody gets along.”

The Watertown, NY-native joined the Burlington, NC-based team this past December after more than 15 years behind the wheel of his well-known Sweetners Plus Racing ride. And on Tuesday night, he and the new team never missed a beat, besting the 48-car field by leading all 30 laps of the Feature for the $7,000 top prize.

From the pole, McCreadie jumped to the lead right away and began playing tough defense from a streaking Brandon Sheppard, who had won the previous five Late Model races contested at the DIRTcar Nationals. A late restart gave Sheppard a final chance at McCreadie, but he was ultimately unable to catch the leader and crossed the line in second. Kyle Bronson held off a hungry Dennis Erb Jr. for the final podium spot, and Jonathan Davenport raced his way up to complete the top five from 10th.

From the drop of the green, McCreadie seemed to have the answers to each of Sheppard’s challenges. Sheppard tried to get by T-Mac on the low side, pulling up alongside his Mega Plumbing #39 several times, but was ultimately unable to complete the pass. McCreadie just seemed to have a better car right in the middle of the racetrack, and he said it was all about what he learned from watching Sheppard drive to victory on Monday night.

“I watched the night before, I ran the bottom, following Brandon for a little bit and he got away,” McCreadie said. “I just saw what he was doing. He started arching really wide and clipping the track in half.”

At multiple points during the race, Sheppard was good enough on the bottom to nose his way into the lead, but only for a turn or two. When done correctly, McCreadie would power back around to The Rocket-Shepp’s outside, using that momentum in the high-middle groove.

The two battled back-and-forth for multiple laps at a time before getting spread out as they eclipsed the halfway point. Kyle Bronson had made significant efforts on the top side, battling with Erb Jr. for third, and the two soon began to catch the leaders before the race’s only caution flag flew with 10 laps remaining.

“The high line was definitely good for me, I’m comfortable up there racing,” Bronson said. “But when I moved down in the last couple of laps, I actually felt better on the bottom, really. It’s good to know our car is maneuverable.”

On the restart, McCreadie said he could feel the pressure to get separation from Sheppard.

“I’ve been around a long time, and there’s like a ‘money restart.’ And with under 10 [laps to go], it’s like, you better do something. Just something that gives you a little bit of room to breathe, and I feel like it happened, because the sticks were fairly wide when I went by.”

He indeed get that separation, immediately opening up a few car-lengths lead. Again, using that middle groove, where most other drivers chose not to drive.

“My crew chief Phil, he gave me one signal right after the yellow where Brandon was back beside me. It was a move of like, ‘hey, drive that thing right through the middle as hard as possible and roll to the cushion.’ And I just did it and I never saw Brandon again,” McCreadie said.

Leading the field back to the checkered flag, McCreadie snapped Sheppard’s five-race win-streak at Volusia in style, doing something very rarely seen at Volusia, let alone at all – outrunning the Rocket1 Racing car.

Even though he couldn’t catch McCreadie in the end, Sheppard said he was pleased with his car, just needed to get out in front early like he did the night before.

“We had a good car, and we put ourselves in the right position early in the night,” Sheppard said. “[McCreadie] just got the jump on me at the start and it was pretty much over after that.”

Much like some other teams do, Sheppard said he and the Rocket1 crew were testing out a few things to see the car’s capability on the final DIRTcar night before the World of Outlaws Morton Buildings Late Model Series shows begin on Wednesday.

“I think our car was really good, and we tried a few things tonight, trying to make the car a little bit better. And that might have been some of it too, kinda got off-track from where we were last night, just trying some stuff before the Outlaws races,” Sheppard said.

The 49th annual DIRTcar Nationals action continues with the arrival of the World of Outlaws Morton Buildings Late Models on Wednesday night, as they run alongside the Super DIRTcar Series in the first of four 50-lap, $10,000-to-win shows.

Hot Laps are scheduled to begin at 5:30 p.m. ET; catch all the action live on DIRTVision!