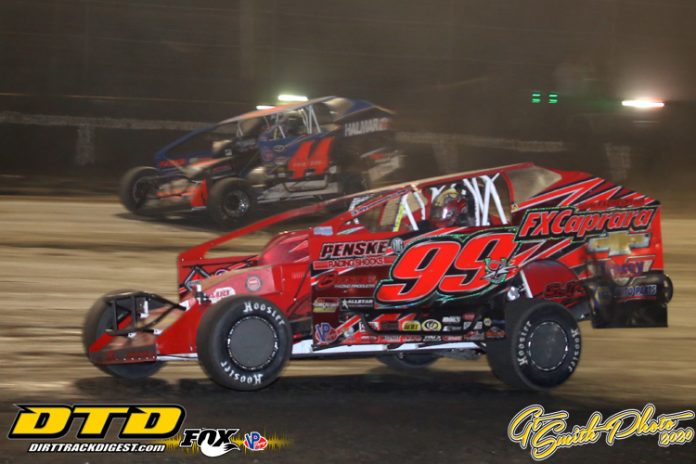 Larry Wight had his way with the Super DIRTcar Series field, leading wire-to-wire during the second night of the DIRTcar Nationals to grab his first win of 2020. The win earned Wight $3,000 for his efforts.

“We ended last year on a good note,” commented Wight. “We’re happy to see its translating into this year.”

Defending DIRTcar Nationals defending champion Wight set the pace early in the 30-lap feature event, with Brett Hearn and Stewart Friesen in tow. As Wight pulled away, Hearn had to fend off Friesen, but Friesen took the second spot with a low side, lap five pass as Wight and Hearn rode the top. The yellow flew a lap later, setting up the first restart of the event with Friesen lining up alongside Wight.

The top three remained status quo on the restart, with Dunn in fourth and a wild battle for fifth headlined by Erick Rudolph and Mat Williamson. As Wight looked to run away and hide, a lap 11 yellow for Justin Haers’ flat kept him in check, giving Friesen another crack at the lead.

While Wight was still in full control at halfway, his lead was half of what it was earlier in the race. Williamson had disposed of Dunn and Hearn to get third, but was out of striking distance to grab a top two spot.

With ten laps to go, Wight had a stable one-second lead over Friesen, as both drivers placed their Bicknells right through the middle of the speedway, with the exception of Wight running the cushion in turn two.

Suddenly, Wight’s lead evaporated, as Friesen began to experiment and found the bottom to his liking in some spots. As the same time, the leaders hit traffic, and Friesen took a shot at the lead. Wight saw Friesen’s nose, found space to shut the door, then pulled away to another one second lead with five laps left.

“Our car came alive up top, and we were able to run that middle to top lane much of the night,” Wight said. “It felt glued to the track up there, and it was one of those deals when you’re the leader and don’t know what line is the best. When Friesen showed me his nose, it told me the bottom was starting to take rubber and I had to get down there. Even in traffic, I figured I was safe not forcing the issue, I thought Friesen would really have to bonzai it in there to make anything happen.

After Friesen showed Wight the bits of rubber in turns one and four, Friesen’s advantage was gone. One final run on the last lap wasn’t enough for Friesen, as Wight took the checkered on night two at Volusia.