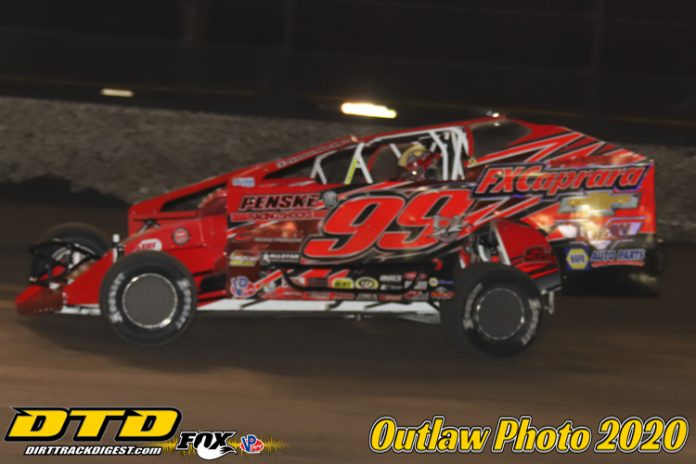 It was deja vu at the front of the field at the DIRTcar Nationals Thursday, as it was Larry Wight driving away from Stewart Friesen for the second night in a row to take the Super DIRTcar Series victory at Volusia Speedway Park.  He pocketed another $3,000 for the win.

“This thing is on a rail,” Wight said. “We were fortunate enough to put the same setup in from last night, and we were still glued to the track.”

Wight translated his torrid pace from Wednesday night into Thursday, walking away from  Friesen and Rick Laubach in the early circuits of the 30-lap main. Friesen secured second from Laubach on lap three, but had no challenge for Wight in the early stages. By lap 10, Wight was up by a full straight, rolling the top with ease.

Mat Williamson drew the first caution of the race on lap 13, as the bolt on the left rear shock mount gave way. Erick Rudolph quietly worked to third on the restart, and him and Friesen gave good challenge to Wight on the initial green. However, Wight powered down and eventually drove away.

With ten to go, Wight’s lead had been reestablished to nearly the full straightaway it was before. Friesen had a comfortable gap over Rudolph, who was trailed by a battle for fourth consisting of Mike Maresca, Brett Hearn, and Billy Decker from the middle of the pack.

Like Wednesday night, Wight’s car was flawless through the middle and top lanes. With that, nobody had anything to challenge the FXCaprara #99L, as Larry Wight dominated the third night of the DIRTcar Nationals and took the win.

“We were good enough I didn’t even need to run the cushion,” commented Wight.  “It’s like a wall up there and you can’t run that every lap without jumping it or hurting the car. I just put it on the crown of the banking where it starts to level off and it stuck.”

For the second night in a row, Friesen spent much of the race staring at a red tail tank with a No. 99L on it. As much as Friesen would like to beat Wight tomorrow, he’ll be competing in the NASCAR Gander Outdoors Truck Series race instead.

“We just got nothing for him,” noted Friesen. “We’re going to take the day off tomorrow to go run Daytona and think about what to do for Saturday. We’re clearly lacking a couple tenths, but I think with some better tire work we’ll be good come Saturday.”

Rudolph worked into third just prior to the midway point of the event, and had an uneventful run to finish on the bottom step of the podium.

“I think we had similar speed to Friesen, it was just a track position game,” said Rudolph. “Our team is really blending well together, so I’m excited for the next couple nights.”

Maresca had his best run of the week finishing in fourth with Hearn completing the top five.