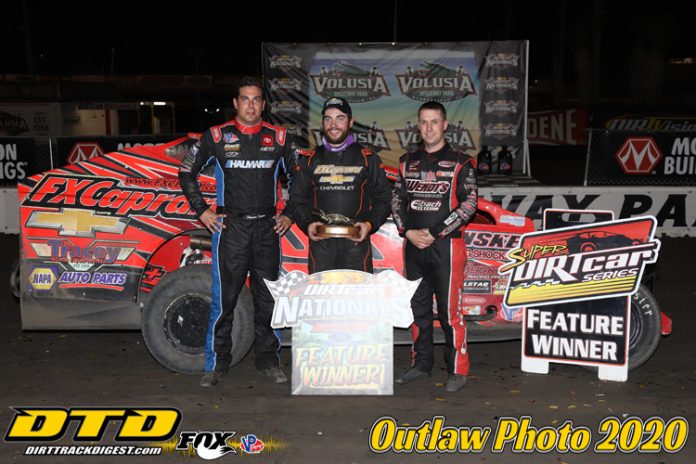 Larry Wight led every lap of Wednesday night’s feature at the DIRTcar Nationals on the Volusia surface to become the second winner in as many nights for the Super DIRTar Series.

On a deteriorating surface, Wight held off challenges from eventual runner-up Stewart Friesen and withstood traffic at the end to take the checker flag by .734 of a second.

In victory lane Wight said, “The car was handling phenomenal and we were really able to roll that middle. I thought the upper part of three and four were taking rubber early and the car just glued up there. That is why I stayed up there so long.”

On the restarts Larry selected the inside and noted, “Whenever you’ve got Stewy on the outside of you know you have to have a good clean start otherwise he will go around you going into one. I felt the bottom was that much better and just tried to run clean with the holes coming out of four.  They really upset the car and the one up top wasn’t much better.  If I got a good start I could manage it.”

Looking ahead, Larry said, “We’re all down here looking for the big gator and to have two nights like we have it definitely helps.”

Friesen settled for second and explained, “It’s what it is. We ran second. The track was burned off and it laid rubber on the bottom. He had clean air and that was what it was all about.”

Mat Williamson, finished in third, was matter of fact about the run.

The first night winner said, “It was a good run after a bad draw. I think the rubber that the track was taking at the end helped us. I was able to catch them, but that was it. I couldn’t pass them. The top three is good for me” as the ultimate goal is to win the championship on Saturday night.