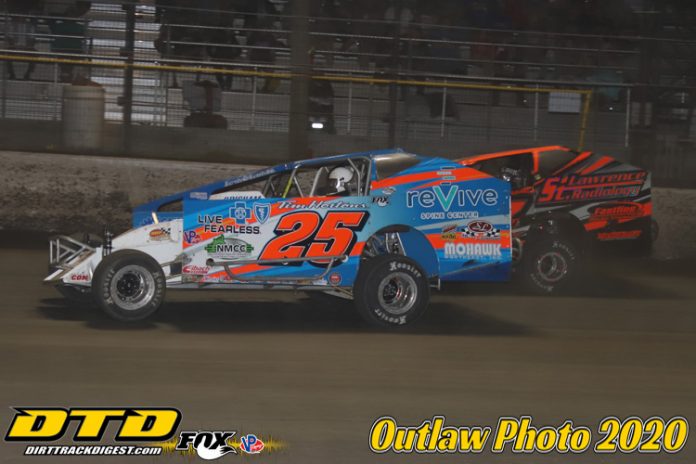 Larry Wight had a perfect storm as he timed quickest in his group, won his heat and walked away with a more than two second victory and back-to-back wins with the Super DIRTcar Series at the DIRTcar Nationals at Volusia Speedway Park.

The winner said, “The car was phenomenal the way it has been running the past two days with no changes. We have found something that works.”

Continuing he said, “Qualifying is so crucial here and the track is fast and not a lot of difference on the bottom, top or the middle.”

A yellow on lap 13 bunched the field again and on the restart, Larry said, “The car was rolling well and I was able to get a jump. Later on I was searching around a bit and tried the low side between three and four, but it didn’t work as well as I had hoped.”


For the second consecutive night Stewart Friesen came home behind the 99L and he said, “We were working hard on that.  I could gain some on Larry, but I had nothing for him. I think we will have to do something as we are missing a couple of tenths.”

Continuing he said, “I got it going on the outside, but just did not have enough for him tonight. He just checked out.”

Erick Rudolph finished third and was philosophical about it as he explained, “It wasn’t too bad. I think I had similar speed to the 44. We are staying positive as we have a good car and got two more. The team is gelling now.”

Michael Maresca rebounded from a heavy crash the night before and turned in his best performance of the week with a solid fourth place drive.

Michael said, “It felt pretty good. I am still shaking the cobwebs off and I have to get better driving to be able to win against these guys.”

Completing the top five, his second in as many nights, was Brett Hearn.

Brett said, “It was a good run and we are close. You have to race good and stay good while being there at the end. We are moving forward and that is the goal.”