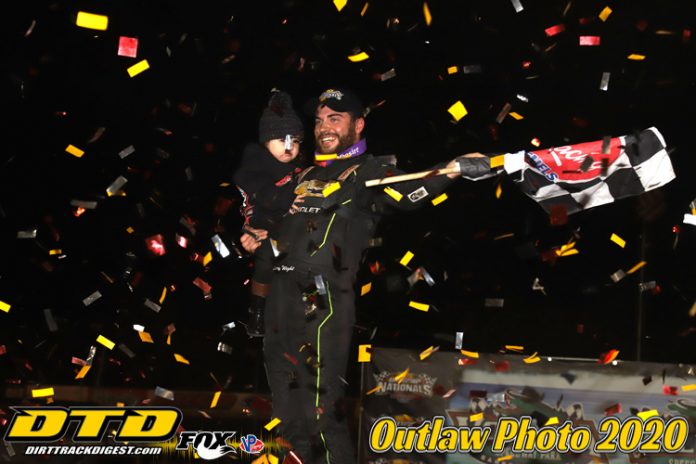 BARBERVILLE, FL – Larry Wight is on fire at Volusia, as the defending DIRTcar Nationals champion got by Billy Decker in the final laps to grab his third win in four nights in the 2020 edition of the event. He put another $3,000 in his pocket for the Super DIRTcar Series win.

“We had a real last minute change, we found a pinhole in the right rear tire just before we went out,” Wight said. “We got a tire worked up really quick, and we definitely did not have enough stagger for this track but we muscled it around good enough.”

Billy Decker stormed away at the start of the fourth 30-lap event of the week, leaving Rick Laubach to settle into second and Matt Sheppard in third. As Decker pulled away, the battle for second was getting hot, as Sheppard stole second with seven laps in, with Wight and Mat Williamson close behind. A yellow with ten laps scored erased Decker’s full straight lead, and forced him to restart right alongside Sheppard.

Prior to the caution, Decker ran the bottom and Sheppard was up high. Both drivers went to their respective lanes on the restart, with Decker only breaking the side-by-side battle as Sheppard grabbed the monstrous cushion a little too hard. Wight joined Decker in the bottom lane, passing Sheppard just prior to halfway.

With ten to go, Sheppard had notably slowed his pace with potential motor issues, as Williamson got by for the final podium spot. Up front, Decker had a comfortable two-second lead over Gypsum teammate Wight, but traffic was coming for the leaders. With six to go, that lead was completely gone.

Wight momentarily took the lead with five laps left, but hit the cushion too hard entering turn three and shoved the nose, giving it back to Decker. The exact scenario replayed the next time by, but this time Wight kept his front bumper aimed straight and stole the lead.

“Decker got stuck behind the traffic and didn’t move up in time,” commented Wight. “I messed up my first time making that move and thought he’d move up, but the lane was still there the next lap and we made the pass.”

Over the final three laps, Wight pulled away to score his third win in a row – this time having to come from seventh.

Decker had his best run of the week, leading all but a handful of the laps. However, the important one was not included in that handful.

“We were definitely better than we had been,” noted Decker. “They were just more versatile than us. Leading that much and losing sucks but we lost to the right guy.”

Williamson had a much needed solid run to remain in contention for the DIRTcar Nationals championship. After a broken shock mount and subsequent 15th-place run on Thursday, Williamson got another podium tonight.

“We were disappointed after last night, but got here at 8am and put in a days work,” said Williamson. “We got it turned around, it was a challenging track out there with the big curb but it was racy, and it was good given the weather we had today.”

Anthony Perrego finished in four spot while Jimmy Phelps had his best run of the week finishing in fifth.