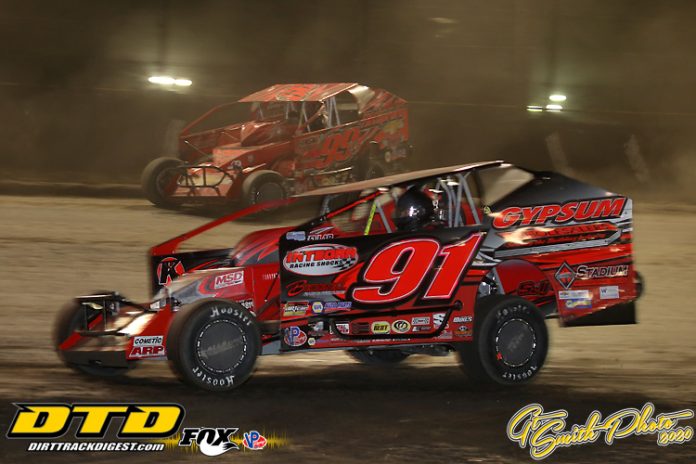 Larry Wight said, “I don’t know how we got a car this good. It shows the hard work of our crew and putting our nose to the grindstone.”

The No. 99L has been fast and came from seventh starting position to win his third in a row.

He noted, “Biggest thing was to keep our nose clean and we want to win the championship too. We were able to pick them off one by one. It hurt early as we had to put new tires on the car just before the feature and it took about 15 laps to come in.”

Traffic slowed Billy Decker as Larry said, “The lapped traffic definitely helped me to catch Billy at the end.”

Reflecting on the last three night even he was amazed at the success and noted, “To come down here and win against the caliber of drivers that are here is amazing. I can’t believe it.”

This car and this track have been made for each other the past three nights. And while NASCAR puts its winning car in a museum on display for a year, Larry jokingly said, “I think I will ask my dad to just put this car in the garage over in Ocala so I have it for next year.”

Runner-up Decker led for 25 of the 30 laps and even though he has been fast in the Sunshine State he hasn’t had much to show for the effort.

On the front stretch after the feature he told Dirt Track Digest, “It was wild and tough sledding out there tonight. The track was narrow all night. I had nothing for him for Larry at the end.  There only seemed to be traction on the bottom.”

Third place finisher Mat Williamson, winner on opening night, said, “It was not much fun out there tonight. The track really threw us a curve ball. We went forward, but it wasn’t fun to drive. It was hammer down racing.”