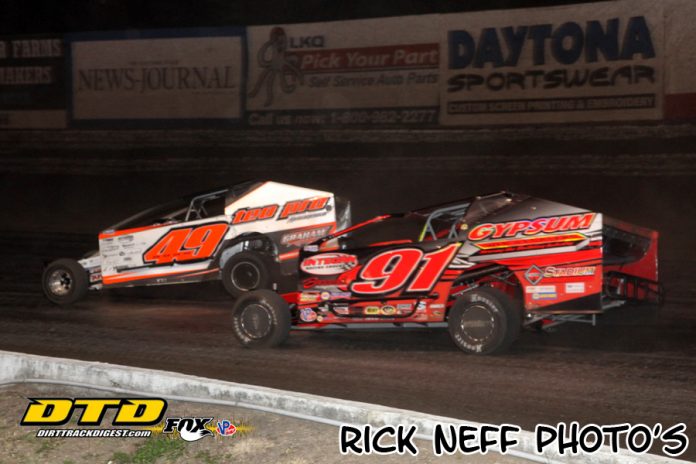 Mat Williamson finished where he started the week as the Super DIRTcar Nationals came to an end on Saturday night.

On opening night Williamson set the stage with a solid first place run, but didn’t win again until the $5,000 to win 50 lap finale.

In victory lane, Mat said, “We were disappointed with our run on Thursday night and it made us work all that much harder. It was important for me to redeem myself after my performance here last year. Hats off to Larry and his guys as they were solid all week. We tried our best and just couldn’t beat them for the championship.”

Jimmy Phleps joined Mat on the front row for the 50 circuit event and had his best performance of the week.

Jimmy said, “We came down here with a new program for us as far as chassis and coil over. We tried some stuff early on and Thursday got the feel to be where we wanted to be and had a top five on Friday. Getting a podium finish tonight is fine. The track locked down with 20 to go, you had to stay in line and couldn’t pass a lap car easily. I feel we made real progress that will help us up North.”

Matt Sheppard had his best run after turning fast time earlier in the night.

His third place was solid as he said, “There really weren’t any opportunities out there and I basically had to cruise. I had a really good car after chasing the car all week long. It was a good night tonight. However, what we did here really doesn’t convert to up home.”

Fourth place Billy Dunn has been fast all week and said, “We’ve been close. It was tough tonight as I needed to balance the car. I know we had a good car all along this week. Maybe not a first or second place, but definitely a top five.”

Continuing he said, “We were so close and we were one good adjustment from getting it, but we couldn’t find that one adjustment. Tonight is as close as it has been.”

Billy Decker, who has worked hard throughout the week, brought the 91 home in fifth just ahead of teammates Larry Wight (2020 Gator Champion) and Pat Ward.

Decker said, “It was pretty good tonight, but I think the car was better than fifth. It was tough out there. Passing got difficult, but hats off to Larry’s guys for getting it done.”