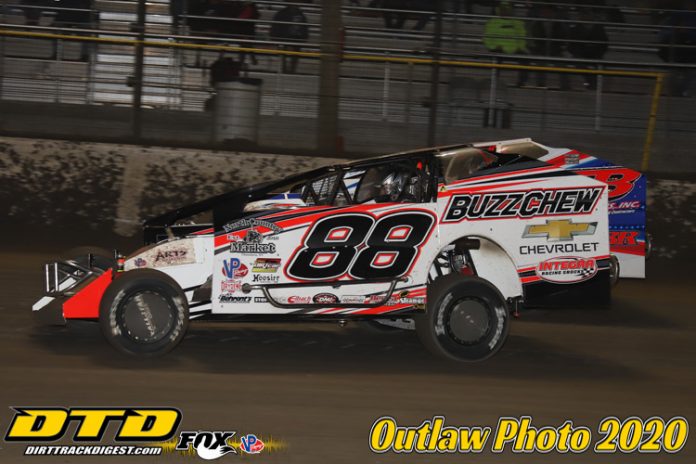 BARBERVILLE, FL – Mat Williamson scored his second Super DIRTcar Series win of the week, leading wire-to-wire in the 50-lap feature event. Joining him on the stage post-race was Larry Wight, taking his third DIRTcar Nationals championship for his fantastic week of racing.

“That Buzz Chew Chevy was so good,” Williamson said. “Everyone on this team was really disappointed with how Thursday went, and it made us work that much harder. It was important for us to come back and redeem ourselves after our bad week last year, and I think this definitely made it better.”

Tuesday night winner, Williamson jumped out in front of the Super DIRTcar Series field for Saturday’s 50-lap finale, with Jimmy Phelps a close second. Phelps hung within shouting distance the first ten laps, looking to pounce as the leaders hit traffic. However, Williamson showed the same pace through traffic that he did on Tuesday, pulling away from Phelps and leaving him to fend off three-in-a-row winner Larry Wight.

A lap 17 yellow for Billy Pauch slowing erased both the traffic and Williamson’s lead, allowing Phelps another crack at Williamson in clean track. The top two remained in their respective spots when race pace resumed, but Matt Sheppard slipped by Wight to grab third. Wight then surrendered third to Billy Dunn, while Sheppard was testing the top to get by Phelps.

At halfway, Williamson had opened up two seconds over Phelps, who now had two seconds of his own over Sheppard. Sheppard, who has had a dismal week by his high standards, now faced challenge from Dunn while Billy Decker slid under Wight for fifth, an inverse of last night’s finish.

By lap 30, Sheppard had spaced himself from Dunn, who had an imaginary rear-view mirror full of the two Gypsum cars. With 20 laps left, a line of rubber had formed one lane off of the bottom around the majority of the track, with the field beginning to migrate towards that groove.

With ten to go, Williamson’s lead was stable, but Sheppard’s car had taken a liking to the changing surface and reeled in Phelps once more. While traffic grew thicker for Williamson, he still had a two-car buffer between himself and Phelps, and Phelps could not close the gap fast enough. When the checkered flag waived after 50 laps, it was Williamson scoring his second win of the DIRTcar Nationals in the Florida tour finale worth $5,000.

Phelps started the week with runs in the mid-teens, but turned up the wick in the final nights and capped the week off with a runner-up.

“We came down here with a relatively new package, with the chassis change and the coils,” noted Phelps. “We got off track early, and it took until about Thursday for me to figure out where we really needed to be. We got a handle on it, and it showed with a fifth and a second the last two nights.”

Sheppard is a yearly threat for the DIRTcar Nationals title, but had a rough outing on a couple of occasions this week. A solid third in the final event of the week ended it on a high note.

“We were just cruising at the end,” Sheppard stated. “We had a good car tonight, finally. We made big swings and thankfully made good strides. We also know a lot of what we do down here doesn’t translate to up north, so maybe we just learned what not to do next year down here.”

For the second year in a row and third time overall, Larry Wight took the week-long points championship. A sixth tonight was Wight’s worst run of the week, but a fantastic week overall with three wins in five tries.

“It’s a combination of a good car, good motor, and phenomenal crew,” said Wight. “The track threw us for a loop tonight and I thought the top was going to be better than what it was, so we freed it up too much. By the end of that one, we were just trying to save the right rear.”