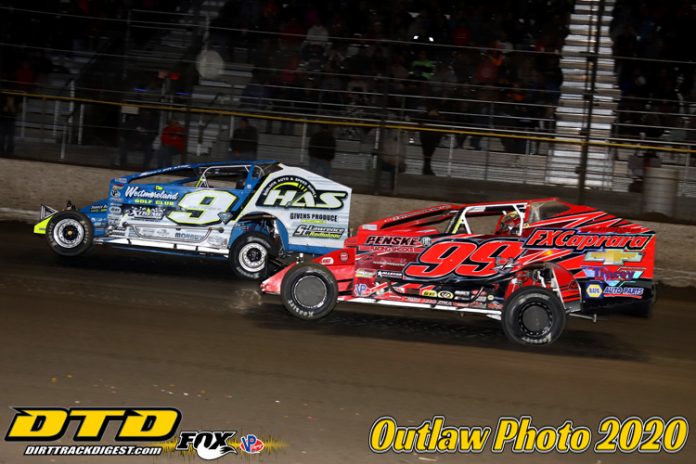 Okay, the Super DIRTcar Series DIRTcar Nationals at Volusia Speedway Park are over and now the wait begins for the 50th edition next year.

Southern fans got their annual look at, what they call “Yankee Modifieds,” over the past two week with the show at All-Tech and the five night run at Volusia.

Every year fans look forward to wild action at Volusia with passing, drivers coming from deep in the field and wild finishes.

However, unfortunately that was not the case this year. Four of the five nights was a relatively locked down track. Certainly, the cars were fast and “hammer down” was the mantra. Only Friday night, when Mother Nature gave the best thing a dirt track can have, natural water, was the racing better. Some drivers said they couldn’t get off the bottom, but Larry Wight did. He didn’t exactly plan it that way, but knew it was the only way to catch Billy.

Were there some movers? Certainly, but for rare exceptions the moves were brief.

Drivers indicated that due to the track conditions it might have taken five or six laps working on the guy in front of you in order to make a pass or the car you were trailing might have to make a mistake to get past him.

Another comment I heard was one that I never thought I would here in short track dirt racing.

More than one said that you needed “clean air” in order to be successful.

Still another concern from several drivers were the cars themselves.

All were on coils, chassis are relatively the same and comments such as “we are all the same out there and it is like IROC.”

For those fans who might not be old enough to remember IROC was an invite only special that put the best drivers from all divisions in the field. Even Steve Kinser had a ride in the all equally prepared Camaros.

So it’s like anything. Sometimes races live up to the hype and other times they don’t. As a dirt racing fan we know that. And anyway, maybe the Southern fans didn’t really realize that the racing wasn’t as good as it was due to the fact that everything down here starts heads up anyways so there isn’t always a ton of passing.

Well, hopefully it was an anomaly.

However, it was still fun. I’m from the North and to see the big-blocks on a race track in February five times at Volusia and three complete shows at All-Tech really makes my winter.

So we will do it all again next February because if you can, you do.

So it’s time to wrap up the notebook

Before getting to the serious stuff I saw something quite funny. The mules were heading for the pits with several guys aboard pulling their equipment and suddenly right in front of me the 99L team stops. Three guys hop off as one grabbed a wagon, another opened it up, another had a small bag as Larry’s wife exited and joined them and then someone put Brooke in the wagon as they were headed for the grandstand. The first pit stop I ever saw to transfer a child.

In time trials Wight entered the first turn on the first lap, slammed a huge rut, the car bounced, the engine popped and he fought to control the 800 horsepower monster. Didn’t know if any damage was inflicted on the engine, but the “pop” was more like a “boom.” He ended up timing second in his group to Mike Maresca.

Matt Sheppard was quick time on the final night and other group quick times were Mat Williamson and Jimmy Phelps.

I have to apologize for not doing time trial or prelim stories, but those of you who know me know that my knees are shot and I was simply out of gas to climb the hill from the Gator pond. I am so sorry.

Rick Laubach damaged the motor even before action began. He kept coming out, but wasn’t going anywhere. He got a provisional, dropped out early and was the first car headed North. He was gone by the time the Mod feature had ended. He was fast all week with the only bar car with a right panhard.

Peter Britten was a victim of mechanical problems that put him behind the Eight Ball all night long. Peter dropped out of the time trial line with a broken yolk on the transmission. He went to the back up car, started deep in the field in 23rd and did work his way up to 16th at the checker.

Mat Williamson thought he was going to lose his ride in the Buzz Chew Chevy after last year’s Nationals, but this year he won two including the big one and finally met “Walter” the alligator. He led all 50-laps for the two second win.

Billy Dunn had a great final night. He had the quote of the week saying, “We were one adjustment away, but we just couldn’t find the one adjustment.”

He will start off running the SDS Tour and will be in the Ray Graham machine all year. Dunn was fourth on the night after starting sixth.

Jimmy Phelps started first and finished second and probably made more progress than most. Jim is still getting use to the new Bicknell and the team had made several changes in their program during the off-season.

Matt Sheppard found the fastest lap two times during the week for “pole money” that really isn’t pole money (due to the draw), but on the last night he had his best finish as he went to third from fourth starting spot.

Billy Decker said, “I probably passed more cars than anybody this week”, and he settled for fifth leading a fifth-sixth-seventh place Gypsum finish as he was followed by repeat Nationals champ Larry Wight and Pat Ward. Ward went from 10th to seventh.

Brett Hearn muscled his way on the bottom side of the track on the final lap in turn two and appeared to come into contact with Stewart Friesen as “The Jet” picked up 11th and relegated Friesen to 12th. Hearn was one of the few cars to move as he started 23rd to 11th.

Brian Swartlander had the best week of all the Western PA cars and looked fast on the final night only to hugely jump the cushion and nearly take a wild ride between turns one and two.

Fellow Western Pensy driver Jim Rasey (gotta love that last name) found himself in the features with regularity later in the week.

Didn’t get to talk to him, but word was that Billy Pauch lost a motor in the finale.

Rich Scagliotta (24th) and Darwin Greene (25th) qualified for their first feature of the week on the last night.

With 10 laps to go there were still 25 cars running.

In the consi Dillon Steuer spun, and taking evasive action was Dave Rauscher as he spun. Rick Regalski came up the scene and made contact taking a slow roll to be the only car that went over during the week.

Everyone was saying the new high rise grandstands were purchased from one of the downsizing NASCAR tracks.  I inquired and was told “they are brand new grandstands.” Some thought the crowds would be down due to the size of the stands. However, more fans than ever came and though they weren’t sell outs for the Mod-Late Model races, but there weren’t many empty seats.

DIRTcar has these big shows down to a science. They run smoothly and efficiently and many tracks could learn from them. If you go to Charlotte or Super Dirt Week you seem the same type of operations. They ran 12 nights with no rain even though Dean Reynolds noted, “There was a tornado warning one night.”

Watching Friesen surgically preparing his car for race readiness was interesting. Others do this, but I just happened to be walking past when he started and I couldn’t take my eyes off it. Focus.

Tim McCreadie took Friday night off as he felt the rain would just make it not worthwhile. He runs the Lucas Oil Late Model Series and these were World of Outlaw point shows. Actually on Friday there were 51 cars in the pits and only 36 competed. While Late Models ran their 30 lappers for $10,000 to win our Mods ran that distance for $3,000 which was substantially more than last year as the purse was increased. One Late Model driver told me “If it doesn’t pay $20,000 to win it really isn’t worth running.” Wow!!!

I hope that fans who were unable to be down here got a feeling of what was going on through the Dirt Track Digest coverage.

I am proud to be part of this team and for those of you who don’t know, we are a group of volunteers who are passionate about Modified racing.

Thanks to George and G.T. Smith for giving me a place to bunk and taking care of me and Mike Mallett who did plenty of work from home until he was able to arrive for Saturday action. Ed and Betty Bettig were on hand and our numerous photographers have some tremendous shots in the DTD galleries.

When Gater folded a few years ago I had nowhere to go to write. Mike invited me on board and this has been the best racing experience I could have ever imagine.

Many thanks to the drivers, car owners and crew members who provided information whenever I approached them. As a fan I could have never imagined doing what I am doing for DTD.

Many thanks to John Wight for shuttling me around as well as thanks to the DIRTcar officials for letting me ride up the hill with them.

As always I had a great time with two of the nicest, most genuine, laugh filled couple I know in racing…Bill and Kim Shea as time spent with them is treasured time.

I have some interesting stories from the Nationals that I will be working in the weeks ahead and I can’t wait to see our “Yankee Modifieds” in action north of the Mason-Dixon Line come late April or early May,.

Any comments or notes please send along to foley395@hotmail.com