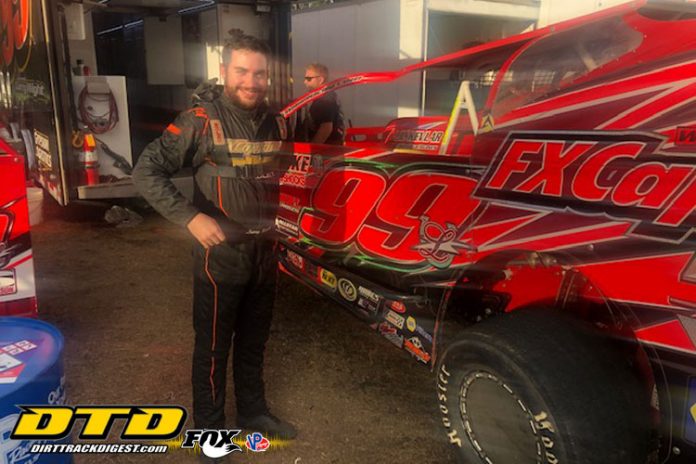 We begin this week with some very sad news that we learned just days ago. The first lady of Fonda Speedway, Ramona Feuz of Esperance passed away on February 7 at the age of 99, just one month from her 100th birthday. Ramona Feuz and her husband, Ed “Flicker” Feuz were the first promoters at Fonda Speedway when it opened in 1953. Ramona worked tirelessly behind the scenes at the “Track of Champions” and each week, on race night, she could be found selling programs and novelties at the Checkerboard Stand alongside her daughter, Linda. We spoke with Ramona just before coming to Florida when she called to thank us for a Christmas card we had sent. She mentioned Fonda Speedway and that she hadn’t been to the track in many years, the last time being, when her husband, Flicker was inducted into the New York State Stock Car Association Hall of Fame in 2001. She also expressed interested in possibly returning this season for Hall of Fame night. Our Speed Week began with the Living Legends of Auto Racing (LLOAR) autograph session and celebrity auction in Daytona Beach where Kenny Tremont, Sr., participated in autograph signing and reminiscing with other pioneers of the sport of auto racing; those who raced on the beach in Daytona and across the country at local dirt and asphalt tracks. Because Daytona Beach is where NASCAR was founded in 1947 and the first ever speed contest was held in 1903 on the beach in Ormond Beach, this area is full of racing history. Each year during Speed Week racers and fans converge on the Daytona Beach area to soak up the sunshine of Florida and auto racing’s past.

On Wednesday the LLOAR Awards Banquet where Ken, Sr., was honored with the “Saturday Night Hero” award for his many years in racing. When he begins the 2020 season at Lebanon Valley it will be his seventh decade of racing at the high banks. And what’s even more amazing is he has perfect attendance, meaning he has never missed a Saturday event at the track. He has had over 20 different drivers pilot the Tremont No. 115, accumulating nearly 400 wins in Modifieds, 44 track titles, most with his son Ken, Jr., behind the wheel. Ken’s cars have won at 20 different tracks from Canada to Florida. In 1989 he built the winning motor that powered his son Ken, Jr., to the win in the Eckert 300 at Super Dirt Week in Syracuse, the biggest Modified event in the country. When the hood was pulled for inspection, the name on the valve covers, read-TREMONT. Ken was one of the first members of the Lebanon Valley Hall of Fame in 1970, he was inducted into the New York Stork Car Association, Hall of Fame in 1989, and named Mechanic of the Year in 2000 by the Northeast Dirt Modified Museum and Hall of Fame. Most recently, Ken, Sr., was inducted into the New England Auto Racers Hall of Fame, as the all-time greatest car owner and engine builder at Devil’s Bowl Speedway in Vermont. He was the only non-New Englander in the 2018 HOF class. Two of the Tremont team sponsors, George Rifenburg and Kevin Starchak were at the banquet to help Ken celebrate the honor.

On Thursday morning the LLOAR held their annual, Coffee with the Characters at their museum and believe us that’s exactly what this event turns out to be each year, what a group of characters. Characters, like Dave Dion and Donnie Allison, that gather to tell stories, most of which can’t be printed but have great entertainment value for the standing room only crowd that comes to hear them. There are also some historic information, like the beginning of racing on the beach in the early 1900s started by sometimes unscrupulous promoters to bring tourism to the Ormond/Daytona area. One very interesting note from the early days of racing on the beach, the sanctioning body in the day was AAA and all motorsports contests had to be sanctioned by them to be legit. Other sanctioning bodies sprang up along with other promoters and the competition began between the two and as we all know it continues today. So when we continue to hear people say, why can’t they work together, they never have and probably never will. We finally got to the Volusia Speedway for some dirt racing on Thursday night and by that time Mat Williamson of Canada and Larry Wight of Phoenix, N.Y., had one win each under their belt in the DIRTcar Nationals. We got back to Volusia for our final trip this season on Saturday and Larry Wight was headed into the night with three wins, and Williamson one. Williamson picked up the win on the final night and was given the $5,000 check and a Gator trophy while Wight was given the Golden Gator trophy for the DIRTcar Nationals Championship 2020, a back-to-back title.

Pat Ward has been coming to Florida to race since 2001 and has been racing since 1973 when he was in the tenth grade. We’ve always remembered him driving his familiar No. 42 when he was a regular at Fonda Speedway each week during the Compani/Hayes era of the track. Anyone that knows Pat always have just a few words to say about him and they are always the same, he’s a truly nice guy. Pat’s record at Fonda shows, 14 winning seasons with 23 wins to his credit. His first win came on May 9, 1987, and his last win at Fonda, September 15, 2018.

Brett Hearn was racing at Volusia, part of his semi-retirement plan to race only special events. His next race will be in June. He has been busy with getting things going at Orange County Fair Speedway where he is Director of Motorsports and he says he’s working on bringing the fans and sponsors back to the track. The next thing on the agenda at OCFS is the Motor Sports Show 2020 on March 21-22. After the final event at the DIRTcar Nationals we spoke with Andy Bachetti who had been in Florida for a month testing and racing his No. 4. Bachetti’s finishes in Florida at both All-Tech and Volusia over eight nights of racing netted him a average of eighth place. Bachetti will race the 2020 season both Friday and Saturday nights and also follow the North and South Regions on the STSS. His team welcomes new sponsors this season; Penske Shocks, C&C Plumbing and Heating, and SRI of North Carolina. Bachetti runs both big block and small block with Bicknell’s powered by Morrison and Billy the Kid engines. His next race will be the Melvin L. Joseph Memorial at Georgetown Speedway in Delaware on March 6-7. Bachetti is the son-in-law of legendary driver, Jack Johnson. He lives in Sheffield, Mass., with his wife, Natalie and two children, Blake and Delaina.

As we close this effort from Florida we send our condolences to the family of Ramona Feuz. Until next week please send all news and/or comments to biittig@yahoo.com