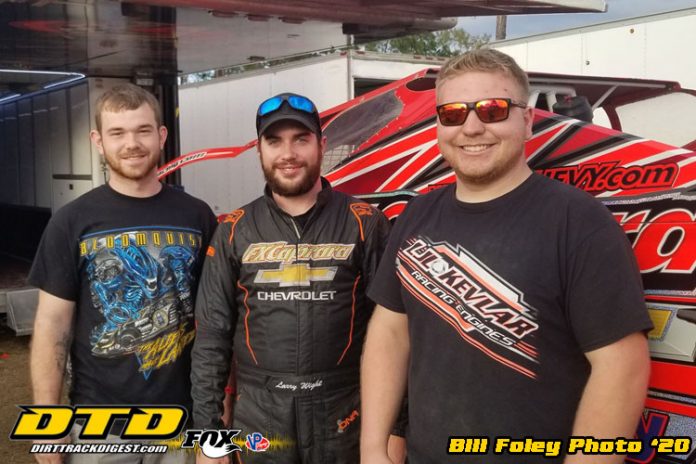 Larry Wight remembers to thank everyone, and I mean everyone, when he is in victory lane.

He thanks his sponsors, families, tracks, fans and those that surround him in his racing world.

However, at Volusia, Larry seemed to have a special appreciation as he “thanked Brandon and Jake.”

Yes, Scott Jeffrey is still around, but his primary focus is Billy Decker’s No. 91.

So now Wight, Jake Pietrowicz and Brandon Ford are the trio that seem to have found something for the Gator winning championship over the five nights which saw three wins, a fourth and sixth for the 99L.

Who are these guys?

Larry said, “Jake has been helping me for 10 years. We grew up together and now he is working in the engine shop helping Kevin (Lamphear) build engines and running the dyno. Brandon is in the shop and does a lot of the maintenance on both Billy’s and my car. He formerly drove and he is helping us get better with coil combinations and is able to see what the cars can do.”

Continuing, Larry noted, “Brandon worked at HBR and has been dating my sister-in-law. So we hung out and I got to know him. I needed a full-time crew guy and someone brought Brandon’s name up. We had socialized together and things worked out.”

In order to be successful these guys need chemistry.

Larry and Jake had that chemistry at a very young age as Larry explained, “I worked on his grandfather’s dairy farm in the summer before I started racing. I probably started doing that around the age of 10. We did hay and corn and I just liked doing it. We became best of friends.”

Continuing he said, “John (Pietrowicz) raced Sportsman for us and we traveled together. Jake got an engineering degree and he is helping with the engine shop. The blend between Rob (Hile) and Jake has been perfect.”

At Volusia the 99L was fast, but also had some of the best side bite Larry had had on a race car.

He explained, “Scott, Brandon’s dad, hauled the car down to Volusia so we could test.”

Larry left the Chili Bowl, flew to the east coast of Florida and then, joined by Brandon, began to test.

He said, “We learned a lot of stuff. Scott also helped. Dave Monoco a new engineer for Penske and Dave Reedy joined us.”

Brandon is excited over his opportunity as he said, “I took auto mechanics in high school. I went to school with Ronnie Davis and we always talked about what it would be like to race for a living. It’s panned out and now I can see just how far it goes. My dad raced for 11 years in a Mod Lite and Sportsman. I learned how the cars felt. I started working with Peter (Britten) at HBR and was there for four years. I learned so much from Peter. Scott Jeffrey has taught me so more and took me to the next level.”

Brandon sold his Sportsman car to commit to his current position and said, “This is a tremendous opportunity and you work, hours, but it is worth it. As far as our chemistry we know each other and Jake and I are also good friends.”

Reflecting on where he is Jake said, “I always wanted to be involved in racing and working with Larry. That was the plan all the way along.”

Of the trio’s relationship he said, “We have the same vision and we all agree on things and can toss ideas around. We are friends.”

Continuing he noted, “Larry is great to work with. When we tested we went back and forth with ideas and saw what worked and didn’t.”

Larry, at 27 is the old man of the group, while Jake is 22 and Brandon 23 thus possibly making an interesting team for a long time to come.