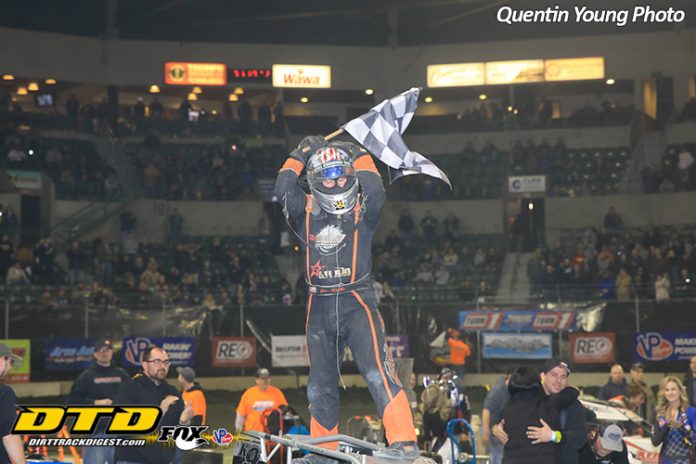 On Saturday the number one, two and four teams in NCAA men’s basketball were upset.

A Zamboni driver came out of the stands and won an NHL hockey game for Carolina.

However, for auto racing fans the East Coast Indoor Dirt Nationals at Trenton, Jon Keller came from the E Main, digested the alphabet soup and sat at the head of the dinner table with one of the biggest surprises in the history of Northeast indoor racing.

Dirt Track Digest reached out to the New Jersey driver the following day and Sunday night he said, “It’s been a crazy day and I’m exhausted, plus I have to work tomorrow despite the urge to wanna call out. It is just overwhelming as I spent all day on the phone.”

Continuing he talked about his frame of mind the morning after and noted, “I was just trying to understand and come to grips with what my team and I had just accomplished. It’s all so unbelievable that you’ve really got to pinch yourself to make sure you aren’t dreaming.”

What were his goals entering the weekend in Trenton?

“My realistic goal going into the weekend was just making the A and finishing. By no means were my plans to run the soup. But in the end it was the hand we were dealt. I couldn’t cry about it. The only option was to strap in and get after it,” explained Keller.

How did it all work out that he got in the wrong letters of the alphabet?

He said, “Friday night we ran well in practice and started fourth in our heat only to stall the engine getting into turn one and stopped. We rejoined the field at the tail end and got back to second. Went to slide the leader, but after committing to it I was afraid I would not have cleared him. I didn’t want to plow into him or take him out so I backed out of it, got way too hard into the slick and spun again. Rejoined the tail end again and jumped a left rear the next lap and stopped for the third time. I was told to park it for causing three yellows.”

So it was on to Saturday and the E where he explained, “I started second to last in the E number two. I don’t think I’ve ever been more calm and collected at any other race in my career. Probably, because I didn’t have much time to think about the gravity of the situation. We just kept advancing. But I have to admit at the beginning of the B I just felt like I couldn’t get into a groove. I found myself sitting seventh, but gaining on sixth. I knew I needed the spot. The Last lap I just ran the top and got a run. Luckily I got into sixth and moved into the A.”

So there he was in the A and he said, “Starting 24th. Well, I realistically just wanted to survive and finish. But I was already at peace with whatever fate would have as my outcome at the finish. I was proud of my crew and myself. We never quit. But, I was far from prepared for what ultimately unfolded.”

Talking DTD through the A he said, “It basically went exactly how I needed it to go. We needed the cautions and needed not to be a caution. We stayed outta’ trouble and avoided the big one that really helped us get up front. The most dicey moment was making contact with Brendan (Bright) on the front stretch as I tried to stay to his outside. It was purely a racing deal. I doubt he knew I was still there and likely thought he had cleared me. But, I got up the wall and packed the right front with mud making the steering wheel shake for the remainder of the race. Although it was exhausting, thank God for power steering.”

There he was in victory lane and he said, “It was crazy, chaotic and full of energy. I couldn’t believe how many people were cheering for my team and I. It’s something I will never forget. Undoubtedly this is by far my biggest win.”

The indoor game is relatively new to the team as Jon said, “We have only raced the indoor series for the past three seasons and to be honest we’ve had terrible luck. But, I’d probably lean more toward not having the greatest experience with the caliber of talent we had been facing. After two lackluster shots at the Indoor Dirt Nationals we felt better prepared and equipped this time around.”

Keller has been racing for a long time and looking back at his career he said, “I started racing 250 stock Micros at Airport Speedway in 2005 then moved to 270 Micros shortly thereafter. In 2009 I started in the 600’s by winning a Sunday day show at New Egypt the first time racing a 600. I ran both a 270 and 600 weekly at Bridgeport and had multiple wins during that span including the Nationals win in the 270. Ultimately I sold the 270 to focus on the 600. I was the 2016 Spirit Auto Center (Bridgeport) Speedway wingless track champ and currently racing a 2017 RTS chassis, Dave Orange engine, Guhl Injection, Rowlands Performance, CSI machine.”

Racing has been a family event for Jon.

Looking at his history he said, “My grandfather, Uncle Bill, Jimmy along with my dad grew up racing Mods at Bridgeport. My dad’s side of the family raced boats in Michigan. After a long break, my dad got back into Micros with my brother starting in 2003. The three of us raced together for several years as well as with my cousin Billy. But to date, the only drivers still wheeling the family are my brother and I.”

Keller will never forget his feelings from Saturday night.

Sunday morning on his wife’s facebook page there was Jon and his five year old daughter Ada and three year old son Jon Jr. posing alongside that trophy that will always have a perfect spot in the Keller home.

The accomplishments that Keller had at Trenton happen in Hollywood movies, but for him they happened in real life against some of the the best talent that can be gathered at one venue.