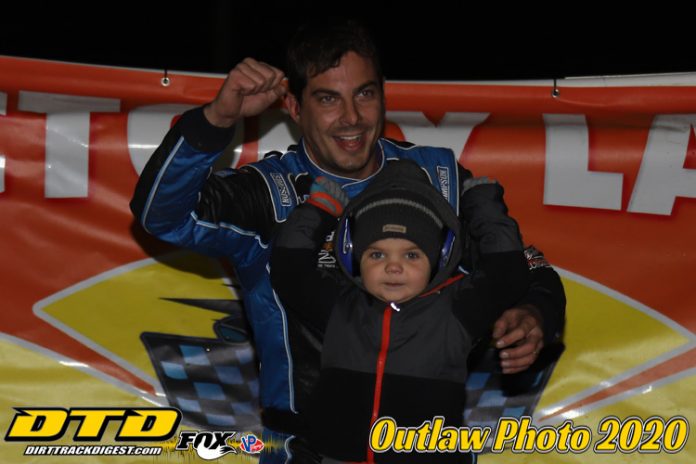 He stood atop the winning NASCAR Truck at Eldora Speedway doing his Donald Duck dance while the world watched on FOX Sports.  From there, it didn’t take long for the entire racing world to fall in love with the animated four-year-old Parker Friesen.

Stewart and Jessica Friesen have been riding the road for years racing whatever is put before them. It might be Modifieds, Trucks or Sprints and in the case of Jess even a Supermodified, but their biggest reward thus far is this youngster. In victory lane there is Parker, their young son, right up on top of the car or on the back of the truck with his dad.

Stewart said, “It’s a lot of fun to have him and Jess at the track with me.  Celebrating wins are always great, especially with Parker.”

When Parker did that nationally seen dance at Eldora, Stew said, “I didn’t even know he could do that. I asked him where he learned to do that and he told me it was his Donald Duck dance. It certainly was surprising. It was the first time he got involved with victory lane celebration at any level. It was so much fun and he definitely feeds off the crowd.”

Friesen said, “Almost everything he does makes us smile. He’s such a ham, everything from his art work at school to riding bikes to his dancing.”

However, there is another side of Parker that has been a challenge.

Parker was diagnosed as being on the Autism Spectrum.

Stew said, “We knew something was wrong after he started missing important milestones at his check ups between 10 and 18 months. The diagnosis was initially shocking obviously, but we embraced it and Jess was very proactive on getting him with the right therapists from day one.”

Continuing he said, “The biggest thing he needed help with was communication. Our first therapist started him with PEX (picture exchange book) where he could pick out or point to pictures of things he wanted and we could get them for him. Initially it was one page with three pictures, his bottle, his blankie and his iPad. From there it went into many pages and over 100 pictures and then he started to form words from there. It was really amazing.”

What were the initial thoughts after hearing the news?

Stewart said, “We did a ton of research and learned that every county in New York State has a program called ‘Early Intervention’ in place to assist families with children on the spectrum. It involves intense ABA therapy. It was sometimes frustrating, but like I said Jess was very proactive in reaching out and getting him help.”

There has been success thus far as Stew explained, “He has actually graduated from his early intervention ABA (Applied Behavior Analysis) therapy program. It started with an in-home therapist that would come for two hours every day to attending school at Cross Roads Center for Children in Schenectady. He now attends Crossroads just for daycare services.” Continuing he said, “It is important just for him to have fun. He loves to hang out with the other kids at the race track.”

The Friesen’s have a place in their heart for Cross Roads as Stew explained, “We’ve had a great relationship with Cross Roads. They’ve done wonders for Parker, as well as many other children. Right away Jess and I felt like we could help in some form using our platforms in motorsports. Over the past years we’ve been able to raise a lot of money for them that they have used to add staff to their programs. Jess has been instrumental in this. I’m very proud of her and all our friends that have gotten involved and volunteered with her.” In meeting other people whose children are on the Autism Spectrum, Friesen notes he might say, “It’s okay. The Early Intervention Program is in place to help. The earlier a child can be diagnosed and enrolled in the program the better.”

On the road together Stew said, “It’s a lot of fun. It was tough at first, but we’re in a pretty good routine now.”

At All-Tech, Parker had another first as Friesen explained, “He’s watched hundreds of races, but that first night at All-Tech was the first time he actually sat next to Jess in the stands. He was playing with his toys, put them away and wanted to watch the race. He was cheering for J.R. Hurlburt as he had a purple light on his car that he liked. I guess I will have to add a purple light to my car.”

When Friesen won there was Parker standing atop the car with his dad holding a bag above his head. Stewart said, “Ha! That was his bag of toys that he takes to the grandstands. When you are four-years-old those are the most important things in your life. For some reason he really enjoys messing with photographers.”

When asked about a Parker t-shirt Friesen said, “Haha, Jess has incorporated images of him and Charlotte (family dog) into some of our shirts. He can have his own once he wins a Sportsman feature, haha.”

Fans and cameras have fallen in love with this little guy and it is great that Jess and Stew share him with the race fans.

Editor’s Note: Dirt Track Digest reached out to Stew to see if he would be willing to share the story of his young son and we appreciate the cooperation in regards to a very personal story.