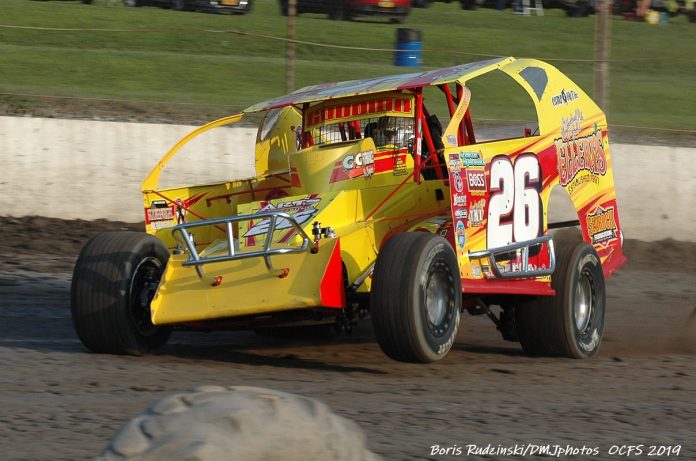 After a very busy 2019 which saw Ryan Godown travel across the eastern portion of the United States chasing the Super DIRTCar Series, 2020 will find the Ringoes, N.J., driver staying much closer to home. Although Godown and the Searock No. 26 enjoyed their year of traveling, it was just not meant to be for the team this season.

“We had a very good year last season with the Super DIRTcar Series and I enjoyed it very much, but it just takes it’s toll on you and your team,” explained Godown. “It’s a lot of traveling for everyone and even though I would like to do it again, it just wasn’t possible without having a sponsor come on-board to help out with the expenses involved. We sent out some proposals, but unfortunately weren’t able to find a sponsor.

“Listen, Steve Searock put everything he had into this last season both moneywise and timewise and we did well, but it just couldn’t be justified to do it again this year without some more sponsorship.

“I appreciate everything Steve and Diane (Searock) did for me last year to let me fulfill my dream of running in the SDS and I am proud of what we accomplished as a team. Our goal was to win a race and finish every race and we accomplished the last part. We did come close to picking up a win at Orange County when we finished second and all in all it was a good first year on the tour.”

With the team not running the SDS series in 2020 the Searock Fabrication team will return to racing regularly on Saturday nights but not where many of you would think. After talking it over with car owner Steve Searock, the team has decided to call Bridgeport Speedway their home for Saturday night competition this season.

“I don’t like normalcy,” explained Godown.  “Running the same place every season is not a challenge and that’s why it was fun running the SDS last season.  We got to go out and experience new tracks and by doing that I believe I became a better driver. Running Bridgeport this season will definitely be a challenge, not just for me, but for everyone racing there. I really like what Doug Rose is doing with the track and the facility. From what I’ve seen of the track so far, it is going to be really cool to race on. The banking itself will make it fun to race on. I am not sure what is going to work better on it, a spec head or a big-block, but either way we will have what we need. I really don’t know what to expect of it the first month but neither will anyone else, so we’ll all be in the same boat.”

Running at Bridgeport will also be an opportunity for Godown to race a SpeedSTR which he just picked up yesterday and dropped off at the garage of former racer Karl Freyer. Freyer will be responsible for maintaining the SpeedSTR throughout the year and having it ready for Godown when the division is on the same card as the modifieds.

Although not following either of the two-traveling series full-time this season, the team will still be very busy. After running Big Diamond Speedway as a regular for the past few seasons, this year the team will only race the bigger shows at the track mostly due to the fact that the track made it mandatory to run gas this season. Godown has always ran on alcohol when racing at Big Diamond and was not a fan of the change.

“I really don’t know why he did it, but I guess he had his reasons,” mentioned Godown. “But I don’t have to like it. It is not as easy as everyone says it is, let me rephrase that. It is easy to do if you want to run tenth every week and that is not what I race for. I race to win and to do that with gas you have to change your motor configuration around to accommodate the change and doing that is not cheap. Your motor runs much hotter on gas that it does on alcohol and that requires changes as well.”

There is still a fondness for running the SDS and Godown will try to make some of those races as well when he can fit them into his schedule along with running some of the Brett Deyo Short Track Super Series races as well.

“We hope to hit up Can-Am Speedway for the SDS opener in April and I definitely want to race at Albany-Saratoga in the Big Show,” cited Godown. “We’ll also be at Bridgeport for the SDS race along with Orange County and of course Oswego for Super DIRT Week and as long as everything is good, we’ll head to Charlotte for the World Finals. I thought we ran well their last season but were just outpowered by fresher motors.

“We’ll race in some of the Deyo shows this year as well, we probably won’t get to them all depending on what we have available motor wise. We tried to get Chuck Cici to build us a wide bore open small-block, but he told us he couldn’t find a block to use so that is discouraging. It’s hard to run that series without one, but we’ll see how it goes. We plan to be a Georgetown for the opener next week with our open 360 in the car. We have the cars available to use and look forward to racing this season. We have a great relationship with Troyer Race Cars and have been working closely with both Rob Fuller and Billy Colton at Troyer to develop a race car that can be competitive with the Bicknells and Teo’s and I think we have something in the works now that will be able to do that.”

It will be still be a busy year for the Searock Fabrications team and to do that requires a dedicated crew and just as importantly sponsors that make it happen and Godown is been blessed to have both of the those.

“I couldn’t do any of this without my crew led by my brother Butch. Butch is the one who makes it all go and is the leader in the shop and at the track. My other guys like Mike Carlucci, Rob Benitez, Dan Fleming, Alex who drives the truck, my son Ryan Godown Jr., and of course Steve Searock and John Ellery who always keeps us laughing. None of this is possible without them and I can’t thank them enough for what they all do for me. I want to thank my sponsors, Campout, Creston Hydraulics, Boss Snowplows, TMI Trucking, Ellery’s Pub and Grill and of course Searock Fabrication. I also need to thank my girlfriend Chelsea who puts up with this crazy life and supports me through it all while taking care of our one-year old daughter Savanna.”

Though there will still by quite of bit of racing on the schedule, the travel will not be there allowing Godown to spend quality time with his family and friends throughout the season.

“This is my son’s (Ryan Godown Jr.) last season of high school and I want to be at as many of his high school baseball games as I can this year,” mentioned Godown. “I missed a lot of his games last year and that bothered me. I want to be there this year to support him in any way I can. It will also give me more time to spend with Chelsea and Savanna during the summer and hopefully we can get down to our shore house more than we were able to last year. I was lucky to have Chelsea and Savanna with me most of last season while we traveled the series, but it will nice to be able to spend more of that time at home this summer.”

As always, I can be reached for any questions and comments at dirtracefan25@hotmail.com or on Twitter @dirtracefan25