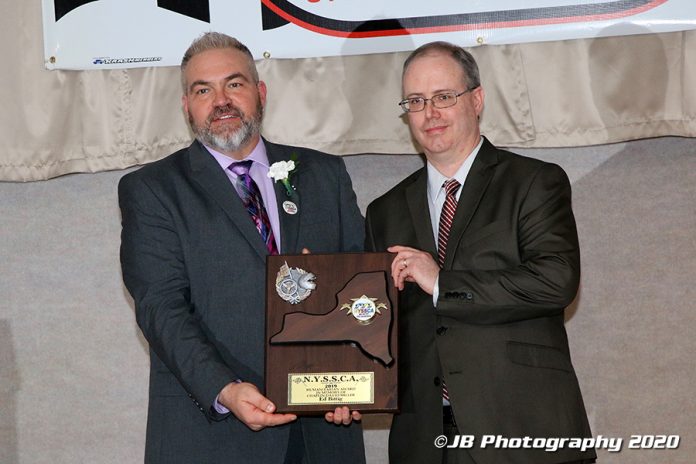 As we sit here in Florida, we noticed a recent post on Facebook from Fonda Speedway and Brett Deyo, One Free Friday. Friday, August 14, Free grandstand admission, $4,000 to win for Modifieds, $2,000 to win Crates plus CRSA Sprints and this all leads to the following night, Saturday, August 15, Championship Night sponsored by Benjamin Moore Paints. No surprise, there were many “likes.” Brett Deyo continues to show his prowess in promoting our sport.

The New York State Stock Car Association (NYSSCA) held their annual awards banquet this past Saturday at the Polish Community Center in Albany and awards we give to drivers from member tracks. There are always special awards and Jack Miller of Schoharie was the recipient of a very special one; Lifetime Achievement. Ed was honored to receive the Humanitarian Award in Memory of Chaplain Dave Miller and thanks Ed, Jr., for accepting for him in his absence. We also thank NYSSCA Treasurer, Cheryl Catman for video taping the presentation and sending it to us and posting on Facebook. According to the report from Ed, Jr., and news that spread on social media sites, NYSSCA President, Dan Wood made an announcement to the crowd of nearly 400 present regarding the future of the banquet. We spoke with Dan on Sunday night and he said, “Going forward the annual NYSSCA award ceremonies will look much different and will no longer be held as an award banquet at the Polish Community Center.” Dan said the organization is looking at alternatives to the banquet and will make an announcement as soon as they have come to a decision on how to move forward with the ceremonies.

We were involved with NYSSCA in several capacities for years and we understand the work that is put in by the officers, board members, and track reps each week and on NYSSCA Safety Award Nights at the tracks and then when the banquet comes around each year they step up once more to bring recognition to all the weekly racers at member tracks and the pioneers of the sport through the Hall of Fame and Special Awards. It’s a lot of work and sometimes a thankless job so we commend all those involved and thank them for all they do for the sport we all love.

More news came out about Orange County Fair Speedway’s 2020 season this past week when Mark “KrashMenders” Krosky posted on his Facebook page that he had accepted the position of Race Director at the track for the 2020 season. Steve Burega will be the Pit Steward. Both Mark and Steve have served as officials at area tracks but this will be a bit more of a trip for each one of them every week. We wish them both well.

As our time in Florida winds down we turn our attention to March and annual car shows in the Northeast. The first being the Syracuse Motorsports Expo at the NYS fairgrounds on March 14-15, also on the same weekend March 13-15 closer to home the Northeast Race Car Show will come to the Via Port Rotterdam. On March 21-22 fans can travel a short distance south to Middletown for the Orange County Fair Speedway Motorsport show. The following week March 27-29 the Fonda Speedway Car Show sets up in the Via Port in Rotterdam. These shows are slated to kick off the racing season in the area and the first time fans can see the new cars and the drivers. The two shows at the Via Port are free and the Syracuse and Middletown shows charge admission. The Syracuse admission is $13 for adults, $5 for kids 6-12, the Middletown show is $12 adults, children 12 and under free.
Of course if you are willing to travel a few hours further south Brett Deyo and his team at BD Motorsports will be ready at Georgetown Speedway in Delaware to kick off the season with the fifth edition of the Melvin L. Joseph Memorial on March 6-7. And if you don’t want to travel to Delaware you can catch the action on DirtTrackDigest.TV.

In closing we send our condolences to the family of Skip Seymour of Norwich on February 15. Skip was instrumental in the racing careers of many local drivers on the local tracks. He was a true racer and used his skill and craft to build quality race cars that put many aspiring drivers behind the wheel and in victory lane in his Skip’s North Norwich Motors and Trailer Sales No. 4.