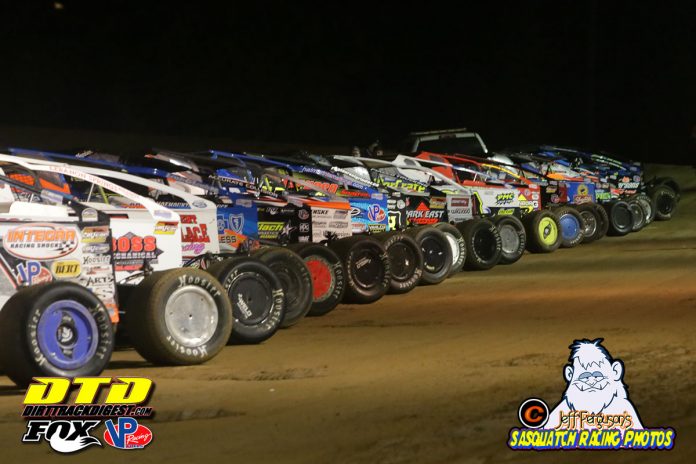 MALTA, NY – A spectacular season opener, a Big Show in the middle, and a Massive finish.

What more could a dirt track racing fan ask for?

One of those specials will be the 55th season opener on Friday, April 17. Sponsored by Bart Contracting and Schaghticoke Wine & Spirits, the 55-lap modified feature will pay $5,500 to win. The card will include a $1,000 to win sportsman feature, just one of several $1,000 to win features for the secondary division, thanks to support from John Ray & Sons.

Rain date for the season opener is Tuesday, April 21.


Brett Hearn’s “Big Show XII” will return to Albany-Saratoga Speedway on Tuesday, June 23. Hearn, an eight-time modified champion at Albany-Saratoga, is now focused on his new duties as general manager at Orange County Speedway in Middletown, and is still working out the final details for “Big Show XII,” although he has guaranteed that the Super DIRT Series race will pay at least $10,000 to win.

July will also see the annual “Stan Da Man” Night, a tribute night for DeVore’s late father, Stan DeVore. The modifieds will be running a 32-lap feature with $3,200 to win on Friday, July 31, and each modified heat winner will receive a $320 bonus. Sportsman will also be in action, competing in the Flying Trowel 32, which will pay $1,320 to win.

When the calendar turns to August, fans will be looking forward to the John Grady/Nostalgia Night on Aug. 7. Modifieds will be racing for $3,000 to win that night, but the highlight of the night is always the return of the stars of the past, who mingle on the green behind the grandstands to talk with fans and sign autographs.

Two major events will be held in September. The racing card on Friday, Sept. 11, will feature a 76-lap DIRTcar East Region Sportsman Series feature, as well as the second annual Fall Pro Stock Classic, which will pay $3,200 to win.

The regular season will come to a close with Malta Massive Weekend on Sept. 25-26. The racing card on Sept. 25 will be highlighted by the DeCarlo’s Autobody Fall Foliage 358 Special, a 50-lap main event. Also on the Sept. 25 card in a 6 Pack Street Stock Series race, as well as a King of Dirt Sportsman series race.

The Super DIRT Series big blocks will return to Albany-Saratoga on Saturday, Sept. 26 for a 100-lap race, paying $10,000 to win. Last year, Demitri Drellos of Queensbury stunned the racing world by leading flag to flag for his first Super DIRT Series victory. The Sept. 26 card will also include a DIRTcar Pro Stock Series race.

Sprint car fans should mark down June 19 and July 3 on their calendars. The CRSA Sprints will be at Albany-Saratoga on June 19 as part of the Hoosier Daddy Father’s Day Special activities, and the Empire Super Sprints will be on the July 3 card, which will be Military Night and feature a gigantic fireworks display.

In addition to racing on the 4/10ths mile overall, Albany-Saratoga will once again be holding its cruise-ins on the first Monday of the summer months. The brainchild of Chris Grady, the cruise-ins grew from modest beginnings in 2019 to drawing over 400 custom cars, trucks and motorcycles for the final event of the season. The cruise-ins are scheduled for June 8, July 13, Aug. 10 and Sept 14, and run from 4-9 p.m. each night.

The entire Albany-Saratoga 2020 schedule can be obtained in a printable PDF version by going to www.albanysaratogaspeedway.com.