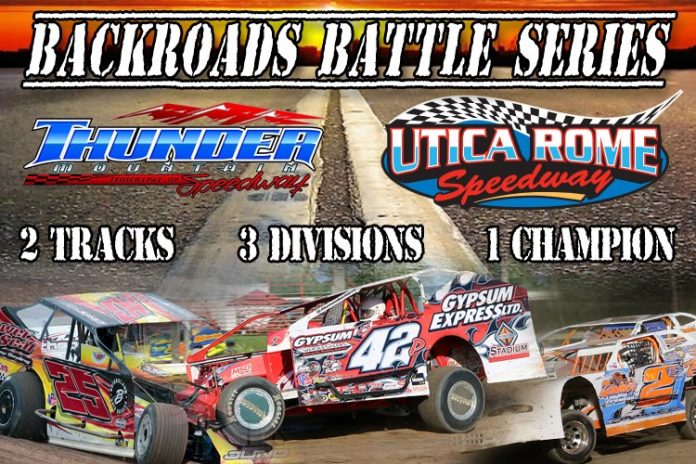 VERNON, NY – Early in the off-season, Thunder Mountain Speedway made the decision to switch to Hoosier Racing Tires for weekly action as well as agreeing to add DIRTcar sanctioning to their 358-Modified and Sportsman divisions for 2020.

Those changes led to conversations between promotional groups at both Thunder Mountain Speedway and Utica-Rome Speedway. After multiple conversations, the speedways have formed a dual track championship with the inaugural Backroads Battle Series champion taking home a minimum of $1,500.

The Backroads Battle Series will pay out the top 10 positions in the points standings. It is open to drivers in the DIRTcar 358-Modifieds, DIRTcar Sportsman and the Street Stock division. The three divisions will compete against each other for one title. The champion in the series can come from any one of the three divisions. A driver’s eight best finishes at each track will count towards the title. A driver that competes at both tracks on the same weekend will receive a 10-point bonus toward the championship.

In order to be eligible, a driver must have a minimum of eight starts at each facility, unless Mother Nature limits those possibilities. Both tracks are utilizing the weekly 60-point DIRTcar point system to tabulate the standings for the series. Weekly track points at each track will be used, with the eight best at each counting toward the title.

“This is something different we haven’t done before,” said Utica-Rome owner Bill Shea. “When Thunder Mountain decided to add the DIRTcar 358-Modifieds weekly we started having conversations and things kind of took off from there. I think we’ve come up with a pretty neat program.”


Like Shea, Thunder Mountain promoter Karl Spoonhower is looking forward to working together.

“We went out on a limb to change things up for this season with the DIRTcar and Hoosier program,” stated Spoonhower. “We’ve had a lot of really positive feedback about the change. When we started chatting with everyone at Utica-Rome it just made sense. We have a lot in common. We couldn’t think of a better way to help both our tracks and to give back to our drivers by adding some extra incentives to run both tracks.”

In addition to the combined points, a $200 bonus will be paid to any driver that can sweep the weekend by winning at both Thunder Mountain Speedway or Utica-Rome Speedway on back-to-back nights. This bonus is also available to drivers in the DIRTcar 358-Modifieds, DIRTcar Sportsman and the Street Stock division. In order for the bonus to be paid, the wins must come on consecutive nights.