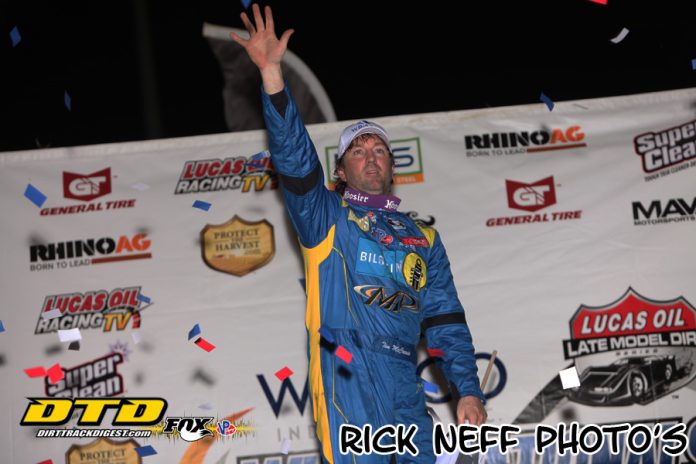 For so many years, Tim McCreadie was a popular fixture in Northeast Modified racing, but his life took him down a different road and he now has fans cheering for him from time to time in a ‘Yankee Modified,’ but it’s usually when he runs full-time with the Lucas Oil Late Model Dirt Series.

In Florida, Modified fans get to see ‘T-Mac’ during the month of February in the full bodied Late Model at East Bay and Volusia, but this year there was no Modified for him. He fared well at East Bay with a win and he also scored a win at Volusia Speedway Park.

Tim knows that he has legions of fans are at the DIRTcar Nationals.  When he won he was greeted with one of the loudest cheers of the week. He said, “I love to win at Volusia. I am fortunate that a lot of people seem to like me. People seem to get really excited when they learn where I am from.  It is very exciting for me too.”


After years with Vic Coffey and Sweeteners Plus, Tim had a tremendous opportunity put before him in the Late Model division and talked to Vic about it. Tim noted, “Vic is doing more with his son in Modified racing and was supportive of the move.”

Every time Tim talks about Mods you can tell from the look on his face and in his eyes that he misses them, but has said on more than one occasion, “You can’t make a living driving them.” A few years ago at Volusia, he came from the back of the Modified field to win and he remembers it well saying, “I had the 39 riding high above the cushion and it was wet on the bottom. What a night. I’ve never forgotten that win and the fans’ reaction.”

That was not the case this year as the track and coil over cars simply didn’t mesh enough to allow for passing. Cars were fast, but passing was at a limit for the majority of time over the five nights.

He noted, “I love Modifieds and am a bit worried about the trend that they are in right now” with the coil over versus bars issues.

However, he plans on doing some Modified racing this year, as Tim explained, “I plan on running races for Vic when I can this year and will be in the Petruska car for like 25-30 races. With the new organization I am it I am freed up to run Mod races and it isn’t as big of a problem logistically.”

Tim noted the Late Model road hasn’t exactly been easy as he said, “I’ve gone years struggling to win, but we’ve had a couple of big ones.”

In his time in the Sunshine state he said, “Florida is a completely different animal from the rest of the country. You go through 100 tires (actually 88 in case) for about five or six grand. You need a competitive motor right off the truck.” Tim has been successful and it’s hard to believe he’s been gone from Northeast Modified as a regular for over 15 years.

Reflecting, he said, “I’ve been able to win the World 100, Lernerville, was an Outlaw champion back in 2006. Winning big races is awesome, but they are hard to do.”

Of Late Model racing, he said, “It’s crazy. You may have 80 cars trying to get in the field. It wasn’t easy and it was a struggle. I had driven Busch cars, ARCA, Midgets and Modifieds, but this was a huge adjustment.”

Racing is his life as he explained, “I left a good paying job in helicopter maintenance at Fort Drum to go racing. I am stressed all the time. I want to win, but I’m learning to temper that as I can’t carry it around all the time. However, with the team I have now, which includes my crew chief, who was with the Clint Boyer and Josh Richards teams, and the structure we have we should be successful and sustainable.”

Stress is something that he has had to live with as he noted, “I made $460,000 one year and $310,00 the next. There is an adjustment as you really don’t know what you are going to make. If I was single and had no kids I could live right in the trailer. However, I have responsibilities and I don’t want anyone to suffer. So I am making plans for the next step in my life.”

McCreadie noted, “I know the end of my career is coming and at 45 years of age I am working on an exit strategy. I have a nine-year-old son and three-year-old daughter.  I’ve been doing this for a long time.

Now residing in Macedon, N.Y., the second generation racer still thinks about home and the past.

Time said, “He is much better now than he was for a while. He has lung issues and fibrosis. He had pneumonia and he was hit with an infection.”

Continuing he said, “He got his medicine straightened out and has been home, doing much better, in better spirits and getting back up and around.” Lucas Oil Series officials were willing to help him out if he had to go home and Tim said, “They indicated they would give me show up points if I had to go home. Down here they counted the best five races and there were a couple of throwaways. Once we leave here that is no longer the case.”

T-Mac noted, “At that point dad was in the hospital in bad shape. He was in ICU. We talked and I figured at worse it was going to take about 10 hours at most in a worst case scenario to get home. The team told me to do what was best for me and my family.”

Tim had spent his share of time in a hospital bed after being injured in a Midget at the Chili Bowl.

He said, “I fractured a T-3 and I was lucky. Tony Stewart flew me to Indianapolis to meet Dr. Trammell (one of the best ortho physicians for Indy Car racers) and I didn’t know Tony at all. In fact, when Tony and Donny Schatz came back from Australia they came to my hospital room to visit.”

The McCreadie name has always attracted a positive response among fans.

Tim said, “Dad had no high school degree and got a GED. He built stuff ahead of the time and fortunately, some of that transferred over to me. I am so appreciative of the people who support us in the stands.”

Did his dad put any pressure on him?

“He never put any pressure on me,” said Tim, ‘But he did get mad at me the day I took off from work to work on the car. He was really upset with me. He was at Bridgeport racing and I had wrecked. I had my own stuff, but he thought it was important for me to be at my regular job.” After leaving the Mod scene of Central New York he clawed his way up the Late Model ranks as he explained, “The first year out I had no wins. The next year I won seven shows and had nine second places. In ‘06, the second year on the tour I won the title and won the Chili Bowl. I received a contract offer to run ARCA-Busch the next year. We came back to build a team in ‘08 and won three big races, but in ‘09 the trend began to change and we got behind.”

Well, he’s caught up and is a contender in each and every show he competes at. However, he respects the competition as he noted, “There are two national touring series” and plenty of outstanding drivers.

Tim said about racing, “You have to have respect and fear to do it the right way.”

For Northeast fans, they know that Tim McCreadie has done it the right way and there will always be  vocal support will be there when that 39 enters the track or victory lane.