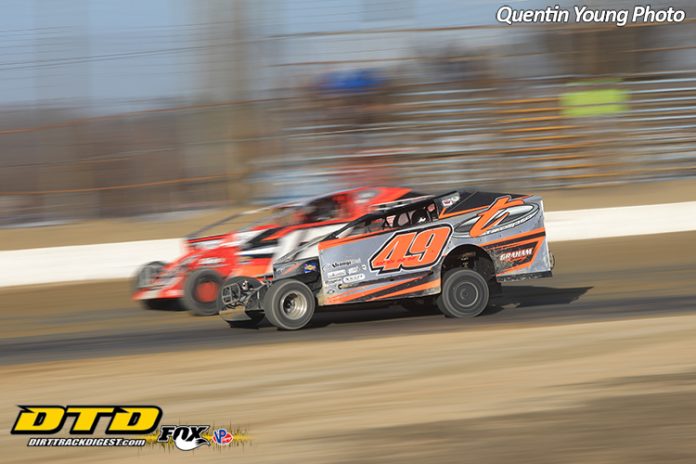 GEORGETOWN, DE –  Jeff Brown held the lead at the start of the 30-lap feature event, with Richie Pratt and David Schilling slotting in behind. Saturday third place finisher Tyler Dippel disposed of Schilling for third with five laps in, but Brown and Pratt had pulled away from the rest of the field. Anthony Perrego and Billy Dunn got by Schilling as well for fourth and fifth, while Brown’s lead over Pratt was starting to shrink.

At the one-third mark, Perrego got by Dippel for third, closing in on both Brown and Pratt. Dunn followed through for fourth, with the top four nose-to-tail by lap 13. Perrego slid by Pratt for second with 13 in, instantly challenging Brown for the lead. As Perrego reached Brown’s door on lap 14, contact sent Perrego off the track and back to sixth.

While one challenger was gone, Brown still had Pratt and Dunn on his tail. Dunn wasted no time battling, taking second on lap 17 and then the lead in the next set of corners. Pratt slid under Brown for second, but Dunn had already started pulling away by lap 20.

While Dunn extended his lead, second on back was up for grabs. Ryan Watt, Larry Wight, Stewart Friesen from 18th, and more all went at it, with Watt ending up on top of that battle when it calmed down. Up front, Billy Dunn had checked out and scored a $4,049 payday in the fast-paced 30-lap feature event. Ryan Watt claimed second from 14th, with Richie Pratt, Stewart Friesen, and Larry Wight the top five.

“That was a heck of a race, weird how that all unfolded,” Dunn said. “I thought Perrego had the car to beat, and I didn’t even know I passed him for until I noticed he was gone. I had a really good car, but I’m still getting familiar with these American Racer tires. Even halfway through the race, I was still figuring out small things with them. I knew if I got out front I’d be okay, and we were just so good the last ten laps.”


A two dollar bolt ended Ryan Watt’s chance at a win last night, but Watt got redemption in the form of a second place finish in the small-block event.

“Our car was good all day, but we suffered in the heat because our motor isn’t as good as others,” Watt said. “We only run open small blocks a couple times a year, so we only got about $10,000 under the hood of this thing. Once the track slicked up, we were able to show how good our car really was and come up through there.”

Richie Pratt had a solid run, but ultimately was not very pleased with his third place performance.

“That was product of starting position, we werent very good,” noted Pratt. “If we had a decent car we could’ve ran away with it, but we just weren’t that good. Any time I got a run on Brown, I just couldn’t move, I was locked into one lane.”

Matt Hill lived up to his nickname in a thrilling 20-lap RUSH Late Model feature. Hill, who lives within earshot of the speedway in Georgetown, survived numerous restarts and challenges courtesy of his friend Amanda Whaley.

Hill launched off the pole via a redraw of top qualifiers. Whaley, meanwhile, started from eighth position in the No. 4. Whaley found the outside lane of the half-mile to her liking and drove to second by the race’s midway point.

Whaley made several runs at Hill during the final 10 laps but settled for a runner-up finish.

A complete resurfacing of the speedway began on Monday with more than 150 loads of fresh clay being spread on the half-mile oval.