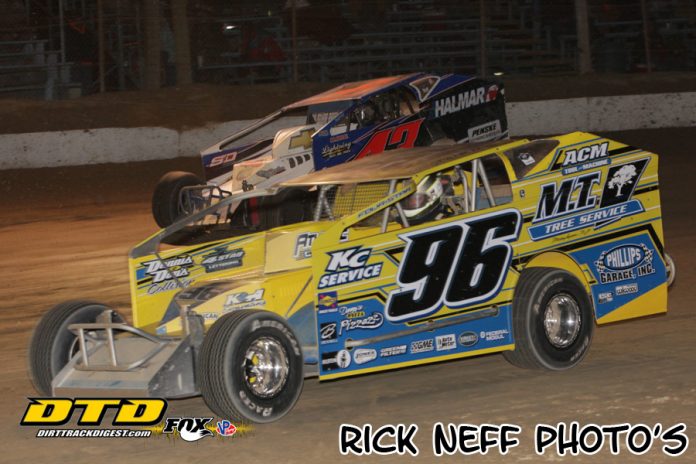 By KEN BRUCE and MIKE MALLETT

The Short Track Super Series officially kicked off the 2020 chase for the South Region title on Saturday night at the Georgetown Speedway with the Melvin L. Joseph Memorial. The $10,049 to win 49-lap feature had lots of excitement before concluding with another Stewart Friesen victory at First State facility.

Behind the battle for the lead between Friesen and Ryan Watt, there was a tussle among several cars. Included in that cluster was New Jersey driver Billy Pauch Jr. Pauch, last year’s Blast at the Beach winner, found his way up to fourth in the final tally after starting midway through the 29-car feature field.

Pauch was looking to get his STSS season off on a strong note this season in the Rick Holsten No. 96, but after missing the redraw in his heat race, Pauch started the race in the 14th spot and knew he had his work cut out for him with an all-star field of drivers starting ahead of him. The Frenchtown, NJ driver was on the move early as he steadily moved through the field entering the top ten around the time the event’s second caution flag flew on lap ten. Pauch continued to pass cars as he found himself sixth as starter Joe Criss signaled the halfway mark of the race. After a terrific battle with good friend and fellow New Egypt Speedway regular Danny Bouc, Pauch was finally able to move into the top five. After early leader Ryan Watt brought out caution late, Pauch moved up to the fourth spot where he would finish.

It was a good way to start the STSS South series for the team and Pauch talked about the race and getting off to a good start in the series.


“It was a good run for us, a nice solid way to start the year off on the series,” mentioned Pauch. “We went with a 53 right rear and I think everyone else had a 48 and it just got a little too tight on us there. It was about restarts there at the end like (Tyler) Dippel said there in his interview he thought second through fourth were all pretty equal and it was just a matter of being able to make moves on the restarts and we weren’t able to make it work there at the end.”

Pauch went on to talk about track position and how much that means especially on a challenging track like it was tonight at Georgetown. With frigid temperatures and buckets of rain in the days leading up to the race, track crews had their work cut out for them.

“We’ve been really steady all year starting with Florida, but we have to pick it up some to be able to run with Stewie (Stewart Friesen) and a couple of those other guys but it was a good run for us. Track position is so killer here and you have to be able to make moves and make things happen in a hurry and unfortunately we didn’t have it tonight and had to work out butts off tonight. It’s tough out there and you end up making stupid moves because of the way the draw works out. You really don’t like too but it’s part of this draw and I guess that puts fans in the stands and that’s what makes it go so you have to deal with it.”
A common theme among the drivers after the race was how physically beat up they all felt after racing 49 laps on a track that was choppy with a large berm, conditions certainly brought on by the weather and opposite of last year’s event.

“It was tough out there tonight, I am beat up pretty good,” explained Pauch. I was glad that last yellow came out because my butt was whooped. Looking back on it now, it would’ve been better if it didn’t come out because I had (Tyler) Dippel there when the yellow came out but yeah, I am pretty beat up right now.”

If there was one driver that really needed a good finish to start the season after a hard fought 2019, it was Danny Bouc. If you remember last season Bouc came into this very same race with high expectations with a new car and motor provided to him from Craig and Leslie Pondish. Unfortunately for Bouc his start to the season ended in warmups when the brand new motor went up in smoke putting a damper on his season. Bouc was forced to run his backup motor all year but still managed to finish twelfth in the season ending STSS South points standings.

Returning to Georgetown in 2020, Bouc was armed with a new Bicknell chassis and the same motor that the team damaged in last season’s opener completely rebuilt by Medford Speed. Bouc won his heat race and was fast all feature long running in third at one point and falling back to fifth at race’s end. It was the start that the team was looking for.

“It was sure better than last year’s opener for sure,” explained a happy Bouc afterwards. “This makes all the hard work we put into this all winter worth it. We went all in this winter and it paid off big time. I knew I had to make some moves early on when everyone was all bunched up on those restarts and after that I kind of just rode because I didn’t want to tear anything up and if you know me like you do that is not the way I normally do it but I wanted to get a good finish out of this race to start the season. The last phone call I wanted to make was to tell Craig that the car was tore up. I really wanted to try running the top but thought the better of it and tried to just settle in there and get a good finish.”

During the mid-portion of the race Bouc and good friend Billy Pauch Jr put on quite a battle for the fifth spot and it was a good battle between two drivers who respect each other.

Following late-season success in 2019, Larry Wight continues to experiment with a four-link setup in his Gary Simpson owned No. 12. As Wight and company attempt to figure out the proper configuration of the suspension, they’ve experienced some mechanical woes along the way. Saturday night Wight was forced to a backup car for the consolation after suffering a part failure in his heat race, collapsing the rear suspension while running in second.

“We had some mechanical issues with the first car,” cited Wight. “We think we have something messed up with the geometry in the rear-end. It keeps breaking J-Bars. Rather than have happen again in the consi, we decided to pull out the backup car. That is just a standard Teo Probot style car. We made a couple changes to it, put some of my shocks on it that we brought down for my car. I think we got the car pretty close, I just think we needed a little more time in the car to really see what it needed. It is the first time I’ve driven that type of car. All-in-all, we ended up a lot better than some guys.”

Wight’s night ended with a sixth-place effort in the No. 12. He survived the main-event by missing several incidents along the way.

“The track was a little bit rough getting into one,” mentioned Wight. “I think the biggest issue was a lot of guys wouldn’t go above it, they’d drive right straight through it and that would cause a lot of melee. Then, everybody fighting for the bottom going into one on the restarts would cause it, but that is racing in the spring. It doesn’t matter where you go, you are going to get that here and there.”

Ryan Godown exited his heat race early after breaking the power-steering while running close to a transfer position. In his consolation he missed his chance at making the feature by one position…

Danny Hieber’s exited the feature early after hard contact with a concrete wall on the backstretch. Hieber was racing mid-pack when contact with another car broke the front-end on his No. 11. As Hieber’s car turned right, he was clipped by another car making steering impossible. Hieber slammed the wall, and while he was unharmed, his car was done for the night…

Rick Laubach suffered motor issues aboard his No. 7 while running in the top five in the feature…

Anthony Perrego, Mike Gular, Duane Howard were all eliminated on restarts. The rough and tumble nature of each restart saw drivers fighting for every inch of the race track. Several incidents occurred in turn one as everyone fought for the preferred groove on bottom…

Ryan Watt suffered a broken panhard bar which lead to a collapsed front end. He had the lead before the part failure. He eventually dropped out of the race due to the issue…

Jeff Strunk was recovering from off-season surgery resulting in him taking limited laps on Saturday. Strunk indicated the team made the trek in order to receive points toward the South Region title chase…

Jordan Watson fought issues all day long, but still ended up finishing inside the top 10 at the conclusion of the race.

Defending South Region champion Matt Sheppard had a dismal and expensive day, dropping out of the race just past halfway. Sheppard ran the consolation where he burnt a piston as he took the checkered flag, forcing him to a backup car. The team switched to the small-block car he was scheduled to run the following day for the feature where he broke a crank. This ended his weekend…

JoJo Watson led the first five laps of the event, but watched his hopes of a great finish go by the wayside in the feature when the rear-end let go.