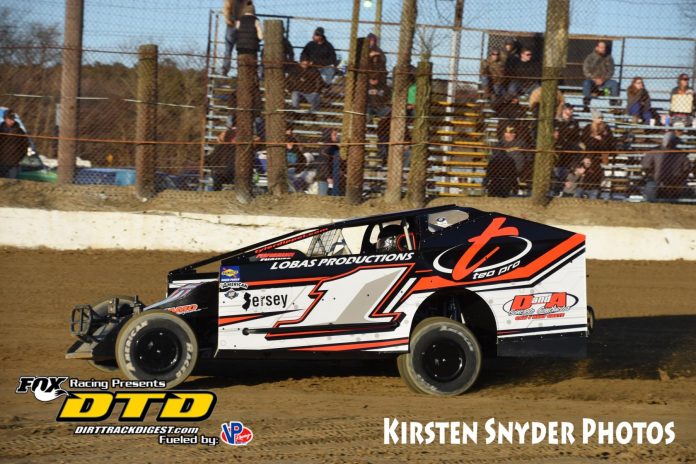 Tyler Dippel is ready for some Modified action in 2020.

The Wallkill, N.Y., driver has a full-slate of Modified racing scheduled for this year.  His first start of the season came in the Melvin L. Joseph Memorial for the Short Track Super Series this past weekend at the Georgetown Speedway.  It went extremely well.  Dippel drove his way to a podium finish behind Stewart Friesen and Craig Von Dohren. For a driver that hasn’t competed in a Modified regularly for several years, he was pleased with the efforts.

“For being out that long, I think coming back this year, this is everything that we could have asked for,” stated Dippel after the Saturday feature. “It was a good, solid run. Obviously, we would have liked to come away with the win, but you can’t complain with that. We got a really good baseline to build off. All the guys at the shop, Ralph, Matt, Bill, they did a really good job putting this car together. I’m really happy with the finish.”

Dippel found himself in the middle of a hornet’s nest for most of the latter stages of the 49-lap race. He battled with Von Dohren, Billy Pauch Jr., and Danny Bouc before eventually settling into the final position on the podium.


“I think we were all really equal,” commented Dippil. “It was a just a matter of track position there. One and two was a little choppy if you couldn’t hit it just right. Lapped traffic messed me up a little bit. Craig got me there. I think it was just track position between us. It was just who could stay in front of who.

“I think we could have maybe got second. It was just a track position game there. Friesen and Watt were kind of in a league of their own. We need to work on it to get a little bit better for Port Royal. Like I said, this was just supposed to be knocking off the rust for me. I think we can only get better and build on it from here.”

Dippel has ambitious plans for the 2020 season. He’ll race in every Short Track Super Series event while also competing weekly for Bill Pascaul Racing at the Orange County Fair Speedway.

Dippel has spent much of his time the past several years on the asphalt competing in Late Models along with several NASCAR Truck Series starts. This year he’s ready to return to his roots. He’s especially excited about the chance to race in very good equipment.

“I’m excited to be back,” said the driver of the Billy the Kid Performance Engines powered Teo Pro Car. “The one thing that I’m most excited about to be back is the equipment. That was really starting to bug me last year. It didn’t really derail my confidence, but I don’t think people on the outside looking in knew the whole situation…why is he running where is? I think the thing I’m most excited about is that we have winning race cars now. We got some chances to win some races this year.”

On Sunday Dippel ran in the top five much of the race before dropping out early. The 23rd place finish wasn’t what hoped for, but he’ll be ready for his next event at the Port Royal Speedway in a few weeks.