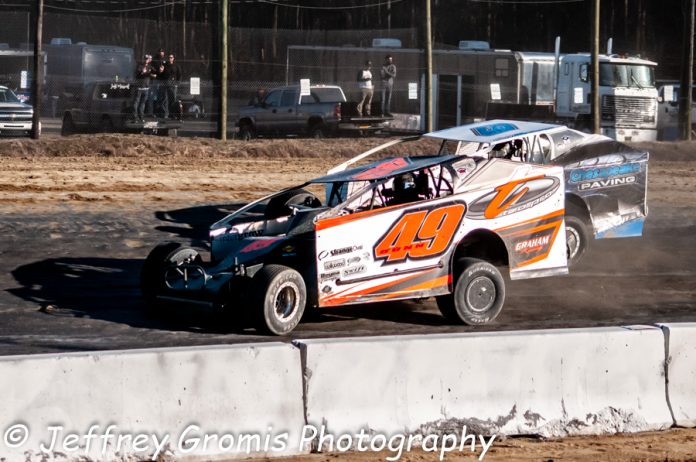 Every race car driver knows that they must take advantage of every opportunity that comes their way. Last season, Billy Dunn was fortunate to land a ride with the Graham Racing stable. This opened the door for him to do a lot more racing than his has in recent years.

Dunn started the season competing in Florida for the team before heading to Georgetown Speedway this past weekend. He’s looked strong at times this yeah, but was still searching for his first win of 2020. On Sunday, he finally broke through.

Dunn dominated the 358-Modified portion of the Melvin L. Joseph Memorial at the Georgetown Speedway. Dunn won the 30-lap feature by nearly five seconds for the $4,049 paycheck.

“This is huge for any team,” stated Dunn. “I can’t thank Ray (Graham) enough for having the confidence in me to give me all this equipment and thinking I can race with these guys. Hopefully we can keep it going. I thought we were going to get a win at All-tech, but things didn’t fall our way. You make a few of the wrong changes, even though you have a fast car, it’s not hard to start doubting yourself. Today helps us build some momentum going forward.”


As stated, during the Sunshine Swing, Dunn was often very good early in feature action only to be off late when he needed it most. Sunday was a big step forward as the team was good when it needed to be.

“I thought we were really close in Florida,” cited Dunn. “We just couldn’t seem to make all the right final adjustments. We had a really bad night last night. Bad draw, bad race track to draw bad on, but they did a heck of a job to get the track better today. We threw some last-minute stuff at it today.

“I can’t thank my crew guys enough. They’ve been busting their butts. Matt and Johnny, I let him do some stuff that I wouldn’t normally do and it worked. It’s good to get a win for them guys.”

Part of the struggle for Dunn has been his lack of experience competing on American Racer tires. Until this year, he had never raced on them. He was aided on Sunday by the fact that the track got slicker as the race went on before taking some rubber late. It was much more to what he is accustomed to in New York.

“We ran a couple open tire races at Can-Am (Speedway) about 10 years ago, but until All-Tech (Raceway) this year I had never run American Racers,” cited Dunn. “It’s a different driving style. Luckily, at the end of the feature, the track came around to be more like what we are use to up home. I got more and more comfortable the whole race. It rubbered a little bit in three and four. With about five to go I knew if I didn’t screw it up I’d be okay.”

Dunn started Sunday’s race from sixth. He raced forward throughout the non-stop main. He made two crucial passes on lap 18 to go from third to the lead. He first got by Richie Pratt Jr., in turns one and two before muscling his way by Jeff Brown in turn three to assume command.

“These guys all race hard down here,” mentioned Dunn. “It’s pretty intense. It is a lot of fun racing down here. I did what I had to do to get to the front. Me and the nine (Brown) made a little contact. It was just hard racing.”

From Georgetown, Dunn will run a few more American Racer events in the coming weeks. At that point, the team will make some plans to figure out what the schedule holds. As he said, the team plans to “see what happens.”