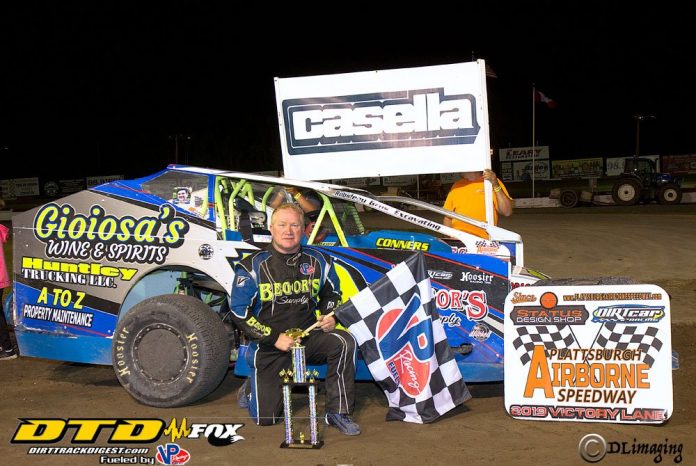 Jamy Begor, from Mooers Forks, N.Y., is looking to keep the momentum of last season going through 2020.

Begor, who has been racing for the past 24 years, is racing amongst one of the most competitive field of drivers in the Northeast at his home track of Airborne Speedway.

The Sportsman division at Airborne has constantly grown since the change over to dirt in 2017, and Begor who made the switch to dirt has adjusted well. In fact, Begor loves racing on dirt.

The beginning of this story goes back to 1997 when Begor began racing in the Street Stock class at Plattsburgh, winning two consecutive championships.


In 1999 Begor moved into the Flying Tiger class where he remained for several years. This was a great class to learn the ropes and cut your teeth in racing, as it was a competitive class that did not break the bank.

B “The Tiger class is a very competitive division,” explained Begor.  “It was a great experience in those types of cars. They were pretty sophisticated and everything had to be just right. After driving both types of cars, I really enjoyed the Mods a little better because you really have to get up on the wheel and drive them and also be able to read the race track to find the fastest way around.” In 2015 Begor moved to the Sportsman class, which used the same motor as the Limited Late Model. It was a new challenge. As Begor emphasized, “by moving to Sportsman this gave me a new lease in racing.” Bigger changes, however, came in 2017 when Begor’s home track of Airborne Speedway went back to dirt.

“A few years back I took the windshield out of my Limited Late model and put a dirt screen in,” he said.  “I then took off the asphalt tires and put on dirt tires.  We then headed to Devil’s Bowl Speedway in Vermont to try our hand at dirt racing. We captured a few victories and were hooked after that. I really enjoyed the change, as it is a lot more racing on dirt than it is on asphalt.”

Since the 2017 season, Begor has progressively gotten more accustomed to racing on dirt and last season he picked up three feature wins with seven top-five finishes.

Begor is looking to keep the momentum of last season going into the 2020 season. “We definitely would like to continue winning races as we did at the end of last year and if we can be competitive everywhere we go, that would be a real plus for our small team,” commented Begor.  “With all of that said, we could not be in the position we are in if not for our great team of sponsors.

“I would like to thank Begor’s Supply, Gioiosa’s Wine & Spirits, A to Z Property Maintenance, Huntley Trucking, LaDukes Flatwork, and J&S Steel. Just this week we picked up Adirondack Auto in Elizabethtown, N.Y. And of course, we have many other great sponsors as well!!

Begor also made sure to thank his wife, “I would also like to thank my wife Beth for all the support and help over the years, without her having my back there is no way I could have done what I have in racing over the years.”

This upcoming season will be a very busy season indeed for Team Begor with running the family business of Begor’s Supply with parents Norma and Larry Begor, located in Mooers N.Y., preparing the car during the week with the help of his great crew and then getting to the track in time for the races. It is amazing this homegrown team can get to the number of races in a season and with a little luck, they will carry on their winning success of last season.