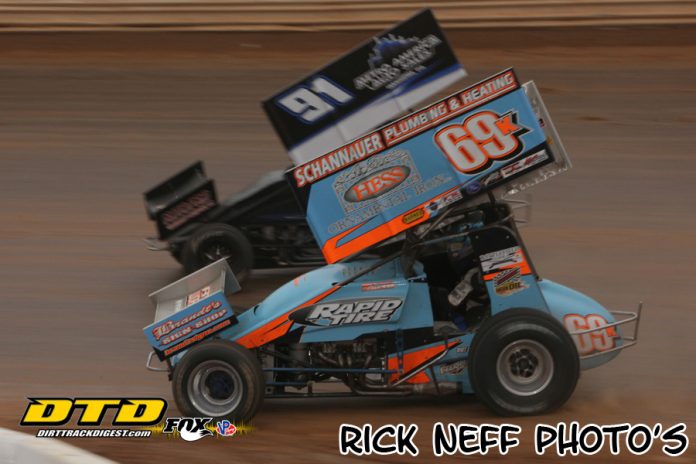 PORT ROYAL, PA – Last week Lance Dewease was standing on the front stretch during victory lane celebrations collecting a check for being the night’s hard charger. The Fayetteville, Pa. native advanced from 16th to fourth, passing 12 cars for a nice additional $925 pay day.

This week Dewease passed 14 cars in Weikert’s Livestock 410 Sprint Car action….lapped cars that is. Dewease capitalized on a pole position starting spot and lapped all the way up to 10th place in the field to best Logan Wagner for the victory by a whopping 7.584 second margin during 25 laps of caution free action.

And he did it in front a nice crowd of fans who braved the brisk temperatures on a daylight surface despite national concerns over Cornonavirus.

“It’s not necessarily a good thing that’s going on out there but I have to thank all of these fans, track officials and everybody who showed up to watch us race,” said Dewease, who earned $4000 for his efforts. “I think we all showed what heart and determination does in racing. The racing community never ceases to amaze me.”


Dewease lined up alongside of rookie contender Jeff Halligan to take the green flag and he quickly stretched his lead to a full straightaway by lap 5.

Meanwhile there was a heavyweight battle going on for the second position as Brent Marks, Logan Wagner and Danny Dietrich were putting on a show.

Marks, who started fourth after traveling over 24 hours to race at the Speedway following World of Outlaws cancellations in Texas, had his hands full as Wagner and Dietrich swapped lines in attempt to get into the spot.

Over the next five laps, Wagner and Dietrich jockeyed for position multiple times, with the three cars three-wide at one point exiting turn two. Eventually Dietrich got by Wagner for third and was setting up Marks for the pass in turn three. However Wagner slid past both drivers on the bottom of the turn to move into second, with Dietrich in tow and shuffling Marks to fourth.

“We were having a lot of fun back there battling for second and I think we all knew we needed to get in that position if a caution were to come out or something,” said Wagner of the battle. “You’d have thought we were racing for the win as I couldn’t even see Lance with how far he was out there.”

Dewease, who hit lapped traffic on the sixth circuit, was slicing through the cars like a knife in hot butter and by lap 20 had built up and over 8 second advantage on his closest competitor. Wagner, who had put some distance between himself and Dietrich by then, tried his best to close the gap but without a caution over the final laps he had nothing for Dewease.

“We were good, but Lance and his team were just in another league,” said Wagner. “I was hoping for a yellow as once we got in clean air we were really good. Without it I knew we were racing for second best.”

With the race staying under green flag competition for the entire distance, Dewease took the checkered flag for the 113th time of his career at the Juniata County oval and moved into the points lead along the way.

“We’ll likely be back next week but we won’t be here all season,” said Dewease when asked about chasing the points title. “We have a game plan and we strayed from it a bit last season and I think it hurt us late in the year. It’s nice to have early season success and we’ll see if we can’t get a few more of these flags this year.”

Anthony Macri picked up the $200 Hard Charger award this week courtesy of Valley Supply Inc. as he passed seven cars to advance to 14th from the 21st starting spot.

Heats for the 33 cars in attendance were won by Gerard McIntyre Jr., Marks, Heimbach, Wagner and Dewease. Macri won the B-Main consolation.

You’d have thought the Port Royal Speedway was in Delaware as Donnie Lingo Jr. and Ross Robinson, both natives of ‘The Diamond State’, battled it out in River Valley Builders Super Late Model competition looking for their first career victories at the Speedway.

Ultimately, Lingo fended off multiple attempts by Robinson and slight contact to pick up his first career victory at the Speedway and the $2500 prize that comes with it.

“I love this track and I wish we could come here all the time,” said Lingo Jr. “We can’t make that drive from Delaware all the time but I think this will be the shortest drive back home we’ve ever made form Port Royal.”

Speedway regular Mike Lupfer and Lingo led the field to the green flag and Lupfer got the early jump. However, Lingo pulled alongside Lupfer down the backstretch on the outside and had enough momentum to pull ahead to lead lap one just before the flagstand.

Meanwhile Robinson, who started sixth, was coming fast as he moved into the third position by lap 2 . Over the next eight laps, Robinson was all over Lupfer and the two cars raced side-by-side with Robinson utilizing the bottom line of the turns.

With the leader struggling in lapped traffic, Robinson finally found enough momentum exiting turn four to pull ahead of Lupfer on lap 13 and set his sights of his fellow Delaware native.

Robinson tracked down Lingo and by lap 17 he was on the bumper of the leader, who was having a hard time getting by the lapped cars in front of him.

“I was good all race, but every time I got up on those lap cars they were giving me all sorts of fits,” said Lingo. “Once I could clear them, the car was great. I was working hard out there to clear them.”

With Lingo tucked on the bottom of the Speedway, Robinson moved up the track slightly in the turn’s and he was setting Lingo up for the pass. Meanwhile, last week’s winner Trevor Feathers had pulled into the third spot using the high side of the Speedway and was ready to pounce should something happen with the leaders.

Robinson made his best effort with three to go as he pulled alongside the leader entering turn three and was nearly even coming out of four. However Lingo pulled ahead coming to the flag stand and the two made contact, nearly spelling disaster.

Lingo recovered and Robinson settled into second. At the white flag Lingo passed a lap car and gave himself the necessary distance to cruise home to the checkered flag where he claimed the victory by a margin of 1.171 seconds over Robinson, Feathers, Lupfer and Tim Smith Jr.

“I didn’t know he was there until he about got by me and we made contact, ” said Lingo Jr. “I knew then I had to move up the track a little. We got by that last lap car and I knew it was ours to lose.”

For Robinson he knew his best chance to win was to be patient and he was happy with a second.

“I was really just setting him up and I knew I had to time my move to where I was alongside him before he could stop me,” said Robinson. “I thought we had him coming off four and we made a little contact, but ultimately he deserved the win. It’s pretty cool for a couple Delaware boys to be battling it out in Central Pa.”