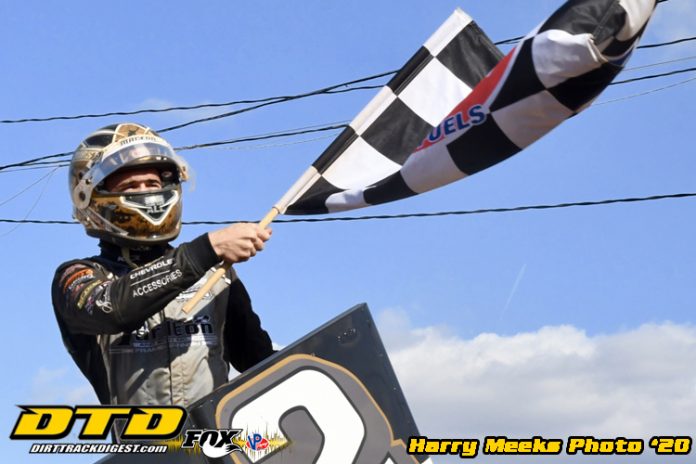 The victory was the first of Macedo’s career at the oval.

“This is without a doubt one of the biggest wins of my career,” Macedo said in victory lane.

“I never thought it would happen.”

Macedo and his team drove from Texas to get to Williams Grove in time for Sunday’s opening day event.

The Californian started third in the 25-lap sprint car feature and watched as polesitter Ryan Smith took the lead at the start.

Macedo briefly fell backward during the early laps but managed to stay in the game as Smith was entering the rear of the field on the eighth circuit.

At first, Smith was able to handle traffic easily, putting three cars between himself and Danny Dietrich by lap 11 but shortly thereafter the front wing on Smith’s No. 72 collapsed and he began struggling to keep pace at the front.

Dietrich was chomping into Smith’s lead on the 16th tour when Macedo blasted to his outside in the first corner to steal second away.

Macedo then quickly ran down Smith’s struggling racer and drove to his inside in the fourth turn to net command with 17 laps away.

The only caution flag of the race then unfurled with six laps to go for Brock Zearfoss who had spun his mount on the frontstretch, finding Danny Dietrich up to second for the new green.

Macedo pulled away from Dietrich on the restart to record the victory going away.

After starting 14th, Lance Dewease motored up to third at the finish followed by 13th starter Brent Marks and
Smith. 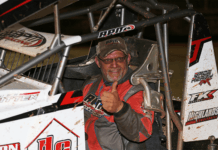 Friesen Is The Show In Fonda’s Firecracker 50 – DTD Exclusive