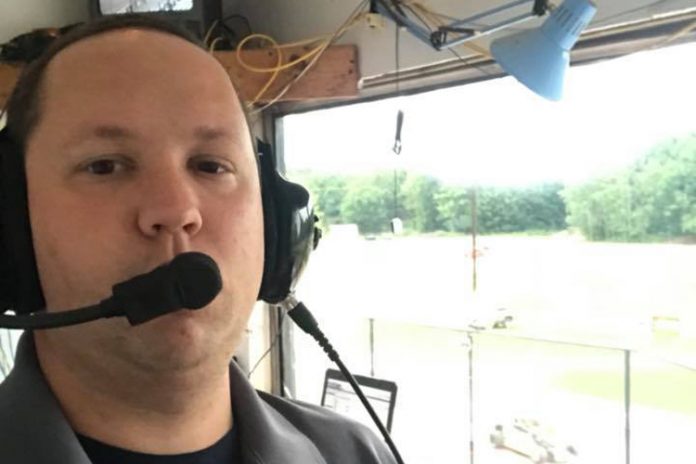 Racing isn’t simply drivers on the track, but passionate people who dedicate their weekends to make certain a fan experience at the race track is a valued experience.

During this unexpected off-season, Dirt Track Digest was determined to keep our fans informed and thus “Behind the Scenes” is one of those ways.

Brewerton and Fulton Speedway Race Director Tim Farrell hails from LaFargeville, N.Y.,and though younger than most folks who are involved in the tower, he brings a wealth of experience.

It’s time to go behind the scenes with Tim Farrell.


Dirt Track Digest: How did you become involved in racing?

Tim Farrell: “I was 15 and it was my first night as head starter at the now defunct Route 58 Raceway (a go-kart track in Gouverneur, N.Y.). A 10-year-old Taylor Caprara won the Jr. Sportsman feature that night and his dad came to victory lane and gave me his number. He said he wanted to hire me. He was co-owner of Brockville, Ontario. Speedway at the time. For the rest of the year I rode Friday afternoons to Brockville and was the turn three corner flagger.”

DTD: What are you currently doing?

TF: “I am the Race Director at both Brewerton and Fulton Speedways.”

“The Race Director is the lead official that oversees the racing. That includes calling cars onto the track, communicating with drivers via radio throughout the races regarding line ups and to inform them of hazards when the caution comes out, calling safety personnel to the track when necessary and issuing track penalties as needed. It is also my job to make sure the show starts on time and is run off in a timely manner each night.”

TF: “My favorite part of the job is just being there. I’ve seen hundreds if not thousands of races, and had the opportunity to meet many drivers who were my childhood heroes as I was growing up. I also love watching first time winners, and sentimental favorites park in victory lane. The excitement as they climb out of the car is always awesome. It also doesn’t hurt that I get the best seat in the house every night.

TF: “The least favorite is having to make call that I know are going to be controversial. I’m lucky that I have management behind me that will always stand behind me. Not all Race Directors have that. It also drives me crazy when the show falls behind schedule. A show that goes more than three and a half hours is a bad night for me.”

TF: “I am a fan. I don’t think any of us would be there if we weren’t. But I do have to put myself in a different mindset when I’m in the tower. They are just cars with numbers and they all are treated equally. I watch the race differently than I do when I am in the grandstands at another track. You can watch your favorite car lap after lap from the stands and in the tower you are looking for the “action spots.”

TF: Well, there are many. There was a season where Will Cagle was the manager at Can-Am when Caprara’s owned it. Listening to him tell old stories was always interesting. My dad made me a ‘Barefoot’ Bob McCreadie fan at a young age. Being able to be there for his last few seasons was also pretty special. I remember watching him toss a cigarette out his side window one time coming to the green. Made me chuckle. The years at Brewerton and Fulton take the cake. The crew we have make every night an adventure. The best staff in racing.”

TF: “I started in 2002 at Route 58 Raceway and have worked at Brockville, Can-Am, Thunder Alley, Evans Mills and my current tracks. I’ve been a corner flagger, head flagger, pit steward (by far the most difficult job at any race track), one way radio operator and race director.”

TF: “I just love racing. None of us would be here if we didn’t.”

TF: “My father and grandfather were huge influences. IF is wasn’t for their love of racing I probably would have never gotten involved. Cory Reed and Dave Farney are also big influences. I have learned a lot form them on how to officiate and put on a quality show over the years.”