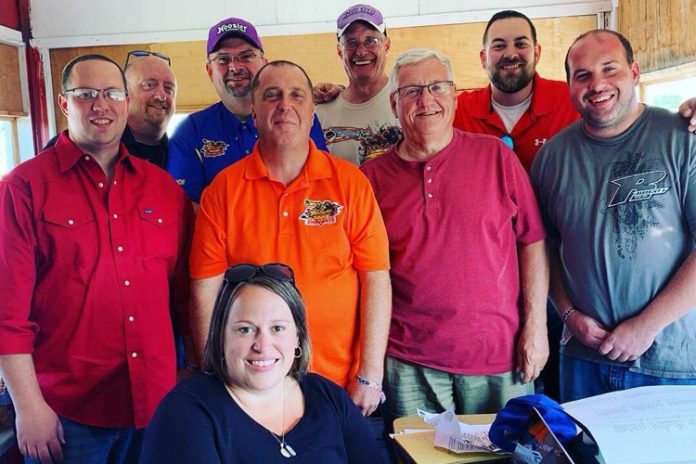 Racing has played a major role in many race track officials lives long before they sat down in the tower on a regular Friday or Saturday night.  Such is the case for Megan Rowe Thackston.

She was a fixture on the racing scene long before finally coming to work on a weekly basis at both Brewerton and Fulton Speedways.

In this second edition of Behind the Scenes here on Dirt Track Digest, I spoke to Megan Rowe Thackston.


Megan Rowe Thackston: “Racing has been a part of my family for as long as I can remember. Our family roots go pretty deep in the racing world. My grandfather, Howard Rowe and his partner Doug Atkinson were promoters of the old Watertown Speedway. My dad, Gary Rowe, and his siblings were involved in racing from that aspect, but I have memories of my dad and grandparents talking about the old Edgewood Speedway (Alex Bay, NY). After Watertown Speedway closed, my dad was involved in writing racing stories. He wrote for Gater Racing News for 40 years. I started out writing for them as well, but it became harder to do, especially when I went away to college. When I was 17, John Wight owned Can-Am Speedway at the time, and I was asked if I was interested in scoring (which I definitely was not), but I was at the race track all the time, and thought it couldn’t hurt to learn something new. Scoring has always interested me. I wanted to learn the process, but not perhaps actually do it.”

DTD: What are you currently doing?

MRT: “Currently, I run the AMB scoring system at both Brewerton and Fulton Speedways. I also work with the program to ensure the scoring information is transmitted online. I also will help with line-ups, which can include creating them and ensuring they get to the pit area, and then I compile all the results for the night to be sent out for points, handicapping, and press releases.”

MRT: “I’ve been involved in this sport for so long that honestly, the racing world is an extension of my family. So my favorite part is interacting with the people I work with, but also, watching race car drivers grow within the sport. To watch so many people accomplish their dreams. Sure there are nights of heartbreak but at the end of the day, everyone shows up weekly and gives 200%. Everyone is there to help and support each other.”

MRT: “Being told that I “play favorites” or that I “screwed someone over” or am “out to get someone.” There is nothing easy about being a race official. Sometimes I think it’s because people don’t understand what it takes to do the job. I feel there is sometimes a big misconception. Sure, the AMB system has helped with some scoring calls. I understand the driver’s frustration when things don’t go the way they intended, but at least at the two tracks I work at currently, we all work together to make the best decisions with the information we have to make it fair for everyone. I understand that the drivers take it personally when they feel like things are constantly happening to them (some of these people that also say these things are the same ones who push the envelope every single week and just say a prayer we don’t notice). At the end of the day, we do our best, and so some of those nights on the drive home… it’s tough to want to go back to the track the following week.”

MRT: “I don’t think anyone could do this job and not be a fan of racing. Not too many people think it’s “cool” to give up your weekends all summer long. I don’t think it’s hard to be a fan and do my job. Maybe it’s because I have been doing this job for so long. Honestly, I am a fan of a lot more drivers now with the job that I do then I probably would have been otherwise. I love watching an “underdog” win. I love watching someone who had some “tough luck” come from the back and win. There are nights it’s super hard to not cheer some of those guys on… especially when you know everything said goes through the announcer’s microphone. I think there is often a misconception that as a scorer, we favor some people over others, but that couldn’t be further from the truth.”

MRT: “I don’t think that I could pick one particular moment that was the best. I’ve had many great moments both as a fan and an employee. I think that my best memories are not perhaps certain race events, but having the ability to travel to see so many different tracks all across the east coast. I’ve been fortunate enough to travel to Florida, North Carolina, Pennsylvania, New Jersey, Delaware, and Canada to different tracks, in addition to tracks in New York. I think my best memory at a track was being able to go to Eldora Speedway. I will never forget the big open field, seeing a house, and then looking behind the house and seeing this huge empire that Earl Baltes built. That’s exactly what I thought it was, a huge empire. It’s amazing to see where dreams and hard work can take someone.
The tough nights are the ones where nothing goes right or when someone gets hurt. Those nights are rough. The marathon nights can be rough, especially doing it two nights in a row. I am lucky that I work in a school system, so my summers are lighter, but the marathon nights can be particularly grueling.”

MRT: “I’ve often asked myself this exact same question. Haha. Honestly, I think I continue to do it because I don’t know what else I would do with myself. When I was younger, my dad used to say that he loved that I was at a race track on the weekends, because he knew who I was with and what I was doing (now that I am older, I am not sure if he really understood). Racing has been embedded in my life for so long, that I don’t know that I could sit at home and not show up at a race track on a weekend. I also think the biggest part of it now, is the people I work with. We truly are a racing family in the tower. We all support each other. We talk pretty regularly, even during the off season, just to stay connected. I couldn’t ask to work with a better group of people. They all treat me just like I’m one of the guys… literally.”

MRT: “I’d say probably my dad. I started out in this sport watching as a reporter, then I became a reporter before I turned into an official. He always had the mindset that at the end of the day, everyone just wants to be heard and be treated with respect. I certainly try to work from the same mindset. Sure, emotions run high. Drivers, crew members and fans won’t always like everything that you say and everything that you do. At the end of the day, by being an official, you are enforcing that everyone “play in the sandbox” under the same set of rules. I don’t like every rule out there either, but it’s not my job to question or change the rules. Everyone is entitled to have themselves be respected and heard, and sometimes that’s not always done in the best way due to emotions, but I think it just goes to show the level of passion that people have for this sport and what it is that they do.”