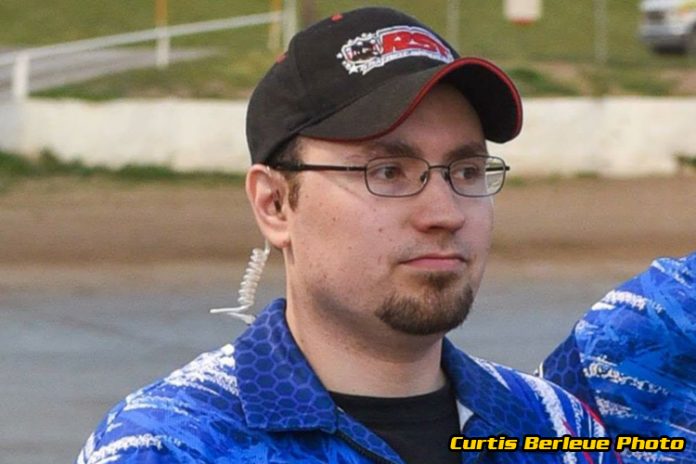 The Patriot Sprint Cars have a great team on the board with them as they travel all over the states of New York, Pennsylvania and into parts of Canada.  One of these team members is Josh Aylsworth.  Josh wear’s many hats on a race night with the series.

Josh Aylsworth: “I have been attending races ever since I can remember. After I graduated high school in 2003, I was looking for further education in college, yet had no idea what I wanted to study. Someone told me, since I was into racing and cars, to check out this newly started program at Alfred State College. It was called “Motorsports Technology”. So I checked it out, went there to meet with the instructor, whom was Tom Taber, owner and race director of the newly formed Patriot Sprint Group, as it was
known as at that time. The program was a two year Associates Degree course. The first year was general automotive study with hands on experience with passenger cars and also included in class learning. The second year was working and studying all different aspects of racing including working on / setting up / fabricating a race-car, working with sponsors, etc. This is the part that Taber taught. So after being in Taber’s class for a couple of months at the end of 2004, he approached me asking if I was interested in helping him out with being a scorer for his Patriot Sprint Group. I had never done anything like that, nor did I know what it was involved. I accepted the offer and on April 16, 2005 at the Five Mile Point Speedway, the journey started.”


DTD: What are you currently doing at the track?

JA: “In 2005, when I first started, I basically had one job. It was just score and keep track of the cars throughout the race night. As the years have gone on and ownership of the Patriot Sprints has changed, so have my nightly responsibilities. Currently, I do a multitude of things including but not limited to driver memberships, heat pill draw, race line ups, scoring, nightly payout, calculate championship points, tabulate and maintain series stats and history.”

JA: “When we arrive at the race track we are racing that night, one of the first things I do is write the nightly schedule of events out on the dry erase board for everyone to refer to during the night. As the drivers arrive to the races, make sure they have been registered for a PST membership and make sure they have drawn a pill to set them in a qualifying heat for the night. After all of the drivers have drawn a pill, set the heat races and write them on the board for everyone to see. After this is complete, its time to head up to the race control tower for the night. After the heats are complete, I calculate the heat passing points, figure out which eight drivers make the redraw, which six race in the dash and
which cars have to race in the B-Main. After the redraw, dash and B-Main is raced, set the A-Main line up. Once the 25 lap A-Main is raced and results have been determined, walk back to the PST command center, place the finish on the board and get the pay out money ready to distribute to the drivers and teams. After every driver gets paid, its time to pack up and head home. Once home, figure out championship points and update stat sheets. That’s a night in a nutshell.”

JA: “My favorite part of the job is getting to visit so many different race tracks and see different people throughout many parts of the Northeast.”

JA: “The least part of the job is seeing someone you have become friends with, traveled up and down the road with, get hurt on the while out racing on the track. Don’t ever want to see anyone get hurt, but when you personally get to know these drivers, it hits home a little more.”

JA: “I am a huge fan of Sprint Car racing and racing in general. In my position, I am not able to cheer or root for any particular driver or team. I have to remain non biased and treat everyone the same. I do attend many other non PST races that I am able to be more of a traditional fan.”

JA: “2020 will be my 16th season with the Patriot Sprint Tour. During my time with the PST, I have worked 36 different tracks in three states and two Canadian provinces.  I have only missed one race during that time with the PST, June 23, 2006 at the Freedom Raceway, to watch my sister walk across the stage to collect her high school diploma.”

DTD: What are some of your best memories at the track?

JA: “Some of my best memories at the track is having fun with the other staff members in between our races. Whether its pulling pranks on each other or just hanging out talking, those relationships and good times make all of the work worth it.”

DTD: What are some of the roughest memories at the track?

JA: “Some of the roughest memories…it was not a PST race I was working at, but the night we lost Kevin Ward Jr. I was there watching as a fan. Was the only, and hopefully the last time, I was present at fatality race.”

JA: “Kind of a funny question I often ask myself to be honest. I keep doing this because of the people. The other PST staff members, drivers, teams, and other employees at many of the racetracks we visit during the year have become family. This has just become a part of who I am as an adult.”

JA: My father raced throughout the 70’s in many classes including go-karts, Modifieds, pavement Late Models and TQ Midgets. I have not really had the urge to get behind the wheel myself, but the apple didn’t fall from the tree as far as racing goes.”

JA: “I’d have to say my dad played the biggest role. He took me at a very young age to watch. Its something he had a passion for and passed it on to me. Which I am very thankful for.”