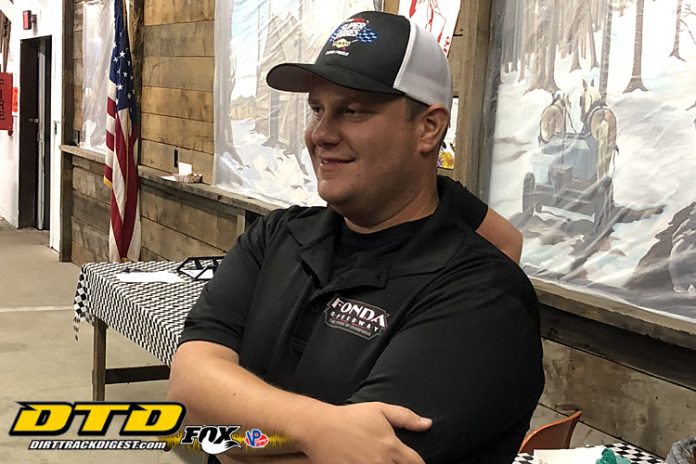 Everyone reads the press releases for upcoming events and results, but seldom do you get to go behind the scenes with a promoter.

Brett Deyo generously cooperated with the Behind the Scenes, an exclusive series for Dirt Track Digest, to provide the story from his roots to his love for auto racing.

Brett Deyo: “I started as a fan at Orange County Fair Speedway. My Dad was a fan before me and started taking me when I was really young. Racing became my life. I made sure I did well in school so I could be there every Saturday. Bill Haley was my favorite driver in those days and I got to help wash the car on Sundays and load on Saturday mornings. Once Accord Speedway reopened, I pestered my Dad into taking me there on Fridays and Orange County on Saturdays. I was hooked from that time on.”


DTD: What do you do at the track you are at?

BD: “I am currently the promoter of Georgetown Speedway in Georgetown, Del., and Fonda Speedway in Fonda, N.Y. Yes, the tracks are six hours apart – haha! I am also the series director and owner of the Bob Hilbert Sportswear Short Track Super Series (STSS) Fueled By Sunoco and the American Racer Cup.

This is our fifth season promoting Georgetown and second at Fonda. Both tracks have a lot of history and character. I enjoy the history of our sport, so having my name go down in the records of both tracks as a promoter is a big deal to me.

Our Short Track Super Series was formed in 2014 and continues to grow, evolve and flourish.  Going to Florida this past February was a big deal. Our series started from scratch and here we were paying big money 1,000 miles from the base of Modified racing. That was pretty cool.”

“To be a race promoter you need to be a PR person, a landscaper, a garbage man, a psychiatrist, a restaurant owner, a referee, a farmer, a mechanic, an accountant, a painter and the list goes on and on. It is incredible the variety of jobs being a promoter brings.

There have been several times when I’ve had people stop in at Georgetown during the week and I’m picking up trash or painting or weed-spraying and they ask me to meet the owner. They are always shocked when I say I am. There are very few self-sustaining speedways, tracks that aren’t funded by another business, that can afford the full-time people they really need. We fall into that category. When I graduated college I never thought I’d spend days covered in ‘garbage juice’ from emptying garbage cans. But you do whatever it takes.

At Georgetown, I am the race director on race night, meaning I communicate with drivers via their one-way radios and talk to all our officials, too. I fill in doing other jobs depending on the night, like scoring, handicapping, etc. Leading up to race night, I work with Lou Johnson helping him with the track prep process. I’ve learned a lot about that side of things from Lou in five years.

At Fonda, I am busier during the week than on when the races are going on, making sure the place looks good and it’s ready. On race night, I watch the races with radio in hand from all over the facility and make sure I am available to make sure everything goes smoothly.

For the Short Track Super Series, I am race director on race night. I handle publicity, booking the dates, coordinating rules and procedures, website updates, etc.  For the American Racer Cup I keep track of the point standings, handle tire giveaways, publicity, paying out to racers and communicating with track promoters.

My biggest responsibility is making sure everything at least breaks even or turns a profit so all the wheels keep turning and we stay in business.  That can be pretty stressful.”

BD:  “At our tracks, I love when racers or fans come to an event and tell me how nice the places look. Our budget compared to a lot of the major players in Northeast racing is very slim. But I believe you can shine by outworking your competition. I do my best to make sure our tracks have fresh paint, signage, white walls and are constantly getting improved, even if they are small projects. So getting the compliments about our facilities means a lot because of the time put in.

On the series, it’s always awesome when we go to a track and put on a good show. Having another promoter or another group of fans compliment the way our STSS crew runs the show, our drivers, our efficiency, definitely makes all the miles and investments worthwhile.”

BD: “Social media – it’s our best advertising tool and biggest adversary, all at the same time. I always say I could work a third of the hours I do now and make a lot more money somewhere else in marketing or communications at a company somewhere. But I love racing. And I take a lot of pride in what I do and what our staff does for the sport. The negativity on social media can wear down someone with even the thickest skin. I talk a lot with Delaware International promoter Charlie Cathell. He has been around forever. He told me one time reading Facebook can leave you feeling like you’ve been beat up without ever taking a punch. He’s right.

I take Fonda for example. I took over Fonda last year and knew going in I personally wouldn’t be able to take a paycheck because of the huge investment in concession equipment, track equipment and other things we would need. So I spent most of 2019 living in a camper on the fairgrounds with my wife and three cats (haha), didn’t take a penny and when the season was done, any money left in the checking account and quite a bit more went to getting new clay for the track. The last thing you want to do is get up on Sunday morning and read how much of an a**hole you are on social media, how you are greedy, and the list goes on. That part is draining.”

DTD: Are you a race fan?

BD: “Yes. Very much so. I still get up early on our race days. I enjoy being at the track. I love going to different tracks. I enjoy the people and I love racing. Sometimes it’s hard to really ‘watch’ a race because of all the responsibilities on race night. But now with Dirt Track Digest, I can go back and re-watch our races for fun. Fonda was awesome last year because it seemed like every race came down to the last lap. I looked forward to Saturday nights all week.”

BD:  “There are a lot of great memories. The Fonda 200 is one.  People thought I was crazy paying $53,000 to win. DIRTcar did their best to go against us and push an event the same day even though it was non-points. We battled weather on Saturday. But when it was all said and done, our small team pulled off one of the biggest Modified events in history. We stayed up and partied until the sun came up. That was a big one.

Our opener at Georgetown in 2016 was another proud moment. We worked literally 18-20 hours a day getting the place ready. It was all-but-closed when we got it and there was so much to do. We got done literally the day before we opened and the crowd and car counts were huge. I remember standing down in front of the full stands almost tearing up thinking about what we had done.”

DTD: What are some of your toughest memories?

BD: “Probably the toughest day was the 2014 Gobbler at Accord Speedway.  It snowed during the week and it was all hands on deck shoveling bleachers and walkways, plowing, etc. Race day came and we had almost 130 cars in the pits. Then, the track, which had been frozen, thawed.  We couldn’t race and had to send everyone home disappointed. That was a brutal day.

Losing Jake Marine in Florida this year on practice day for our Sunshine Swing was a sad day, too. Jake did a lot for so many people, including me, and it cast a sadness over the whole event.  The only positive was he passed away at a dirt track doing what he loved.”

DTD: How long have you been involved and where have you worked?

BD: “My first “job” in racing was 1998 when I started covering the races at what is now Bethel Motor Speedway in White Lake, N.Y., for Area Auto Racing News. I was 15 years old and couldn’t even drive myself to the track. I always enjoyed writing and racing. Friends of our family raced at Bethel and encouraged me to try it since the track was really not getting any coverage. Kevin Kovac was editor at Area Auto back then and was a big help in those days.

After that, I did a lot of publicity and other jobs for different tracks including Bethel, Accord, Orange County, Moc-A-Tek, Five Mile Point, Thunder Mountain and fill-in gigs at other venues. I’ve done PR, announced, done points, scoring, handicapping and a bunch of other things. I promoted my first race in 2006 at Afton and the rest is history.

I have a lot of fond memories of my time working at Moc-A-Tek. Carl Van Horn promoted the track at the time and I would sit with him during the races. He always had some great commentary and I learned a lot from him.”

DTD: Why do you keep doing it?

BD: “I always said I will keep doing what I do as long as I enjoy it. If it’s not fun, there’s more money and less work somewhere else out there for me. But I am still excited for every race we run. That’s what keeps me motivated. I am a competitive person and want to be the best in our industry.”

BD: “My Dad was a fan for most of his life.  After I started writing for Area Auto, he started driving and raced Street Stock at Accord and Bethel mainly. He traveled around to a few other tracks racing. He doesn’t race any more after having heart surgery five years ago but still attends most of my races. He sells STSS apparel with my stepmother.

DTD: Who influenced you most with regards to racing?

BD: “Alex Friesen did a lot of incredible things. When I worked in the Area Auto office I used to pull out papers from the early to mid-1990s and read about what he accomplished and had planned. He had a lot of things figured out well before their time. I love talking to the Friesen family about Alex and hearing some of the stories about him.

I know he is a polarizing figure but I grew up in the Will Cagle era at Orange County. When you look back at the car counts at that time, he did an amazing job running the races through in a timely manner. That’s something I’ve tried to emulate.

(Editor’s Note: If you or someone you know would like to tell us their behind the scenes story for this exclusive Dirt Track Digest Series please send a note to foley395@hotmail.com or PM William Foley on Facebook)