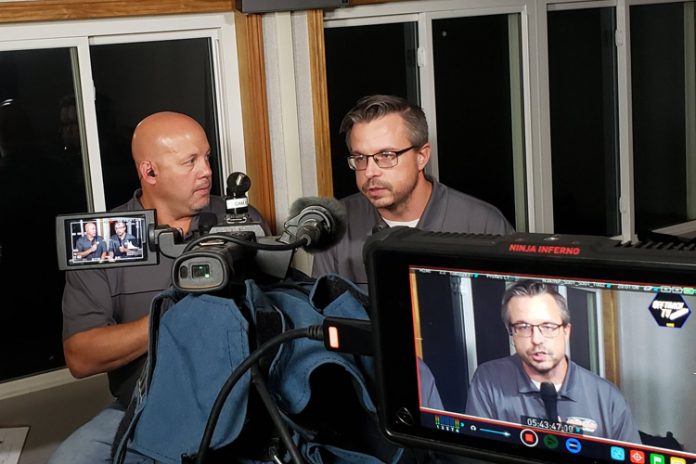 Dan Kapuscinski always had a love for racing.  He started his love of broadcasting during his high school days when he was doing play-by-play for WBUC in Oswego.  Years later he’s become one of the most recognizable faces in Northeast racing.

Many may not realize, but he has finished in the top ten of the Oswego Supermodified International Classic and was the top rookie in the final Sportsmen race on The Mile in Syracuse. He was, and still is, a solid driver with a large amount of potential, but his focus has become on more of the off track scene.

Now, Kapuscinski joins others in our exclusive Behind the Scenes series here on Dirt Track Digest as he talks about his years dedicated to auto racing.


Dan Kapuscinski: “I was born into a racing family. My father, Mike, build 13 Supermodifieds that competed at Oswego. So as far back as I can remember I was at race tracks and around race cars. My first race was an ISMA Supermodified event at Cayuga Speedway when I was three months old. In terms of working in the industry, I started working at the World Racing Group shortly after graduating from St. John Fisher in 2007. I started as PR coordinator for DIRTcar Northeast in 2008 as well as weekly announcer at Canandaigua Speedway before moving to Concord N.C. to be the Media Specialist for WRG and the World of Outlaws from 2009-2011. Aside from racing, my passion has been Broadcast Journalism.”

DTD: What are you doing at the track you are at and please explain your duties as if no one understood what you do

DK: “Since 2017, I have been part of the staff at Weedsport Speedway, Weedsport Productions and Weedsport Kartway. At the speedway I serve as PR Coordinator, which means I handle all pre and post event press releases, social media and I handled a good portion of the daily updates on.

On race day, I work primarily with the Weedsport Production team, helping to produce materials as well as preparing notes for my television role with Speed Sport and MAVTV. At Weedsport Kartway I co-promote with Jimmy Phelps. So, I am responsible for setting the schedule, rules etc. Essentially, Coordinate everything but staffing and track maintenance at the Kartway. I even Race Direct and run the AMB scoring if needed. During the week I co-host Off Track TV with Shane Andrews via Weedsport Productions.”

DTD: What is your favorite part of your job?

DK: “Everything about it honestly. Working in racing is no longer my full-time job. I do it to stay active with my passion. If I had to pick one thing I really do enjoy the promoting I do at Weedsport Kartway. It would be my dream to be paid full-time to be a legitimate promoter of a major speedway.

DK: “When I am working on anything to do with racing, it doesn’t feel like a job. So…rain outs.”

DK: “I am absolutely a fan, I think you need to be in order to work in the sport and give the proper amount of effort and dedication. I don’t find it hard to separate my responsibilities from being a fan, but I have been doing it for so long, I don’t even think about it. It is crucial, however, to be able to separate the two. I think it comes down to the person as to how they handle it.”

DK: “I have announced at speedways since 2003 and officially worked in the industry since 2007. I was very fortunate in my position at WRG, as it took me to countless speedways across the country. I have been everywhere from Silver Dollar Speedway in Chico, CA to the Knoxville Nationals in Iowa, to the DIRTdcar Nationals in Volusia. My favorite events that I worked were likely the Ironman 55 at I-55 Speedway in Pevely, MO, the Knoxville Nationals, the Kings Royal at Eldora and the National Open at Williams Grove. Other enjoyable tracks were Lawrenceburg Speedway in Indiana, Dodge City Raceway in Kansas and Lernerville Speedway in Pennsylvania.”

DK: “My years with WRG and being on the road a lot with the Outlaws were very memorable. Each year we would make a road trip from Concord up to Lernerville for the Silver Cup, to Williams Grove for the Summer Nationals and then over to Eldora for the Kings Royal. That was always a riot. Back then, in order to do DIRTVision, everyone was boots on the ground. So, I was constantly around a great group of people doing something we all loved.”

DK: “I still enjoy being at the track and doing what I do. If I am not at the track, I am typically thinking about being there It is just part of my life and I hope it will be for a long time to come.”

DK: “My dad was an Oswego Speedway diehard and a tremendous fabricator. My mom was a big fan and a close friend of Jim and Debbie Winds so she was always at the track. Plant corn, get corn.”

DTD: Who influenced you in regards to racing?

DK: “Obviously, my parents were a big part in my direction in racing and in life. My mom continues to be a huge inspiration and supporter of mine. In the racing industry, I was very fortunate to work with Tom Deery and Roger Slack and always paid attention to what they were doing. I always make sure to tell people also, that Joe Marotta was the man that got me in the announcer booth when I was 16-years-old. He knew that I had an interest and passion for it. He went out of his way on multiple occasions to put me in a position to have a microphone in front of me. I’ll always be grateful to Joe and his commitment to the sport over the years.”

Editors Note: If you or someone you know would like to be a part of the DTD Behind the Scenes Series please send a note to or PM William Foley on Facebook.