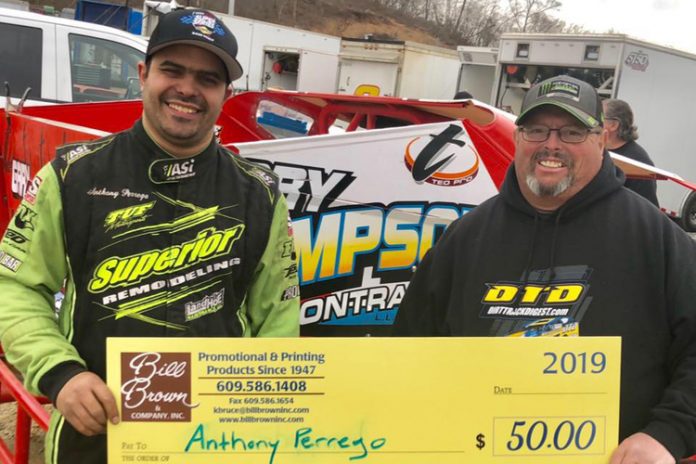 Kenny Bruce is a valued member of the Dirt Track Digest writing and video team. His by-line is seen on many stories from tracks around his area in Delaware, New Jersey and Pennsylvania.

He’s built a great relationship with the drivers, owners and team members in that area in becoming one of the go to reporters.  He started out as a fan, but now spends his days roaming the puts looking for stories.

Now, Dirt Track Digest is going Behind the Scenes with him.


Ken Bruce: “I was 10 years old when my father took me to my first race on opening night in 1970 at the now defunct Flemington Speedway. A couple of my dad’s childhood friends, along with their father,  owned a Modified.  It was the No. 93 owned by the Taylor family and driven by the late Dick Havens. It probably helped that he won that first night that made me get hooked on the sport. It just progressed from there.

“After that my dad would take my brother and I to the shop and eventually we would take the car still on the old ramp truck style hauler to the car wash on Sunday mornings to wash it up. That’s where it started and I’ve been hooked ever since.”

DTD: What are you doing at the tracks you are at?

KB: “Along with my writing duties at DTD, I also do the pre and post race releases for Big Diamond Speedway. I enjoy that very much as it has helped understand how the management side of a dirt track is run as compared to the racing side of the sport. My duties at Big Diamond are to take notes during the night and report the results to the media. I also work with the track promoter preparing a pre-race release for the following week. At other tracks when I am reporting for DTD, I gather notes during the night and use those notes along with post-race interviews to write a story about that night’s race. Lately I have also been doing video interviews with the night’s key participants.

DTD: Explain duties as if no one understood what you do?

KB: “As part of the DTD team I typically try to get to the track early and usually do a few walk-throughs of the pit area and talk to the drivers, car owners or crew chiefs to try and pickup any interesting tidbits that might come into play during the night. I also try to see the track promoter to get his thoughts on the nights program. Depending on who’s there from DTD or if it’s just myself, I will tweet out the heat lineups or at least the heat winners and of course the feature results. If it’s a special race I will also do a post-race video interview or a video recap of the nights results.”

KB: “Being able to see the raw emotion of a driver after a big win, especially if it’s a driver who is not expected to win on that particular night. Danny Bouc’s upset win at Big Diamond in the 2018 Coalcracker race or Mat Williamson’s win at last seasons Centennial race at OCFS, those are two races I will never forget.”

KB: “Having to interview a driver after he lost a race he probably should’ve won or after an altercation with a fellow driver.”

KB: “I started out as a fan and have been a fan for 50 years and always will be. Some days it is hard to put your fandom to the side and be a reporter, but it is something that I have worked hard at and have learned to do. I have had some great teachers who have been a big help to me like yourself (Bill Foley) and Mike Mallett who have given me some great advice since I started writing for DTD in 2015 on how to do just that.”

KB: “This will be my sixth year writing for DTD and my third full year doing the writing side of the public relations for Big Diamond Speedway. Before that I had no other previous experience.”

KB: “As a fan it was Jimmy Horton winning the 1987 Miller 200 at Syracuse after many years of trying.

“As a reporter/writer for DTD, being a part of the “Finale at the Fairgrounds” was very special to me. Doing the video interview along with Mike Mallett when Mat Williamson won the “Centennial 100” will go down as one of my all time favorite moments. But honestly, just being part of a great team of people that make up DTD is what means the most to me. From the owners Mike, George (Smith) and GT (Smith) to everyone involved that make me feel that I am part of something special is why I continue to do what I do.”

KB: “There haven’t been too many until lately, but I would say having made so many good friends throughout the racing world it is very tough to have to deal with losing one of them. Unfortunately, we all just had to deal with two of them in the past month when we lost Jared Petruska and Danny Serrano unexpectedly.”

KB: “I love being involved in the sport the way I am now, but I am looking forward to expanding my role at DTD. I am excited to see where DTD is heading into the future and I look forward to being a bigger part of its success. My goal is to be a bigger part of the DTD TV aspect of the sport and am currently working on my skills as a video reporter to achieve that goal.”

KB: “Not really, like I said earlier it was a friend of my fathers who got us involved with dirt racing.”

KB: “My earliest influence was obviously my father who was the one who introduced me, but there have been others along the way. Charlie Langenstein taught me quite a bit when he was the crew chief for Jimmy Horton back in the early 80’s, but probably my biggest influence to this day in Danny Hieber who I had the pleasure of crewing for back in the early 2000’s. Danny has taught me so much over the years and has introduced me to many people along the way that have helped me as I transformed myself into a writer.  Last but not least, Mike Mallett who gave this old man a chance to chase my passion to be a bigger part of the sport I love.”

Editors Note: If you or someone you know would like to be a part of behind the scenes send along a note to foley395@hotmail.com or PM William Foley on Facebook.