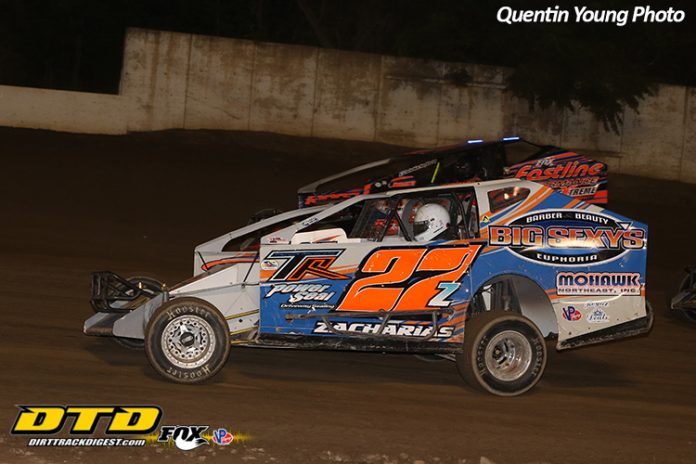 Southern Tier fans are used to the Zacharias name and Dylan noted, “Yes, we are all related. We’re all cousins, then obviously my uncles and grandparents use to race, but it is not on to our generation.”

However, now he is back north and planning for the upcoming season which is likely to take him on a quite different road than the past.


Looking toward 2020 the multi-time Sportsman feature winner said, “Nothing is set in stone, but right now we plan on being at Can-Am on Friday, Fulton on Saturday and Utica Rome on Sunday with the Sportsman. Then we would like to sprinkle in some 358 races. We know we want to try to qualify for the 358 series opener at Fulton and go from there. I would like to find a track that would allow me to run the 358 weekly, but that will be hard with the DIRTCar rule of only six races without affecting my Sportsmen status.”

Looking at the 358 venture, Dylan explained, “I had intentions of putting something together before 2020 was over to get in a 358 and get my feet wet before 2021.  This deal for a complete engine came up when I got home from Florida and it was too good to pass up. I think it’s everyone’s goal to move up and I want to see where we stack up skill and equipment wise against these guys. It’s going to be a real test for us.”

Zacharias started racing when he was just five-years-old. Reflecting on his career thus far, he said, “I started racing Microds at the Fairgrounds and did that until I was about 12 years old.  We won many features and a State championship. At 12, I moved up to Micro Sprints with the 125 and then moved to 600’s which I did for five years. We were able to win a few races at Lime Rock and Paradise. Then, in ‘16, we started to dabble in the Sportsmen stuff. That’s where we have been ever since.”

Right out of the box in the Sportsman division you would find the 27z at a variety of race tracks.

Explaining the travel he said, “We’re never afraid to travel as much as we can. I think if you want to be the best you have to run against the best. And traveling lets you see what you need to work on to be better, even at your home track. I also think racing the same track and same surface every week you get into a groove and that hurts you over time. It doesn’t open you up to trying new things. I’m always trying new things, from night to night, I’m always thinking of ways to get a tick better and sometimes it bites you, but sometimes you find something really good.”

Looking toward the 358, Dylan said, “I think the challenge is going to be first just adjusting to the speed difference, where you let off the throttle, getting the car slowed down when the track is slow are the obvious challenges. I think adjusting to the skill level of a 358 compared to the Sportsman is going to be difficult. Equipment wise it might be a struggle, but I believe after a few races we’ll have our ducks in a row and be able to compete for top tens.”

A year ago Dylan had taken a wild ride at Weedsport and in approaching the team it was noted he was banged up, but he had been involved in worse and that he had a major struggle earlier in his life.

Talking to DTD, Dylan explained, “I could sit here all day and tell you about the medical issues since I was an infant, but there is a short story. When I was two I had meningitis and that kickstarted a bad road for me. It led to later years having a very high spinal pressure, which would cause pressure on the optic nerve in my eye and in turn would create very severe migraines. Actually, I had a very small blind spot because of the pressure on my eyes.”

Continuing he said, “They diagnosed me as having a pseudo tumor.  So, in 2009, I had brain surgery to put a VP Shunt in to relieve pressure from my eyes and that has helped and I have no more headaches. In 2013, I fell playing basketball and had to have the pressure valve replaced with another brain surgery. And ever since then I have been good. It was a very long road and many trips to many doctors as far away is Philadelphia.”

So as you can see obstacles simply don’t stand in the way of Dylan Zacharias.

He is quite appreciative of those who have helped and noted, “I have to thank Mom and Dad first off all, my sisters Brittany and Rachel, my brother in law Matt for the help at the track. Peter, Scags and his wife Randie as well. I couldn’t do what I do without sponsors including Mohawk Northeast, Power Seal, Big Sexy’s Barber & Beauty Euphoria, Dig Race Products, Henry’s Exhaust, Ken Unger Race Car Wiring, Troyer Race Cars, C.B. Auto and Lamb’s Speed Shop.

So eventually when the 2020 season does begin, the 358 will grow, at least a few nights, by one car as Dylan Zacharias is rarin’ to go.