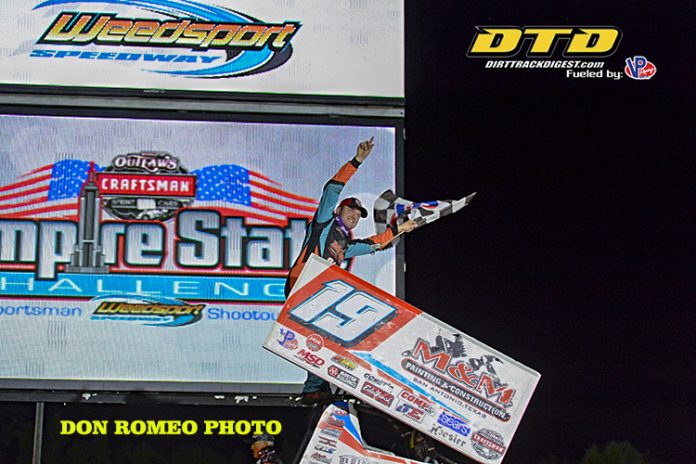 WEEDSPORT, NY – When the World of Outlaws NOS Energy Drink Sprint Car Series makes its long awaited return to Weedsport Speedway for the Empire State Challenge on Saturday, August 1, it will be presented by A-Verdi Storage Containers.

The highly anticipated visit by the Outlaws will be the first to Weedsport since July 29, 2018, when Brent Marks led all 35-laps and sped to a $10,000 victory over Sheldon Haudenschild, Jacob Allen, Brad Sweet and David Gravel.

Tickets for the Empire State Challenge at Weedsport Speedway, presented by A-Verdi Storage Containers, are currently available online at www.weedsportspeedway.com under the tickets tab.


As a local family owned business, born and raised in the state of New York, A-Verdi understands the needs of the community and have the local knowledge and expertise to provide superior service.

While the Outlaws have been on hold in-person, due to various mandates in regards to the COVID-19 pandemic, virtual action has been hot and heavy via iRacing with recent events broadcast live on FS1.

Another such broadcast will take place on Wednesday, April 8 at 8 p.m. featuring drivers from across the world of DIRTcar Racing, competing in virtual World of Outlaws Sprint Cars and Late Models.

Weedsport Speedway’s 2020 season is scheduled to drop the green flag for racing on Monday, May 25 for the $7,500 to win Super DIRTcar Series Heroes Remembered 100.
For Weedsport Speedway updates and schedule information visit www.weedsportspeedway.com.