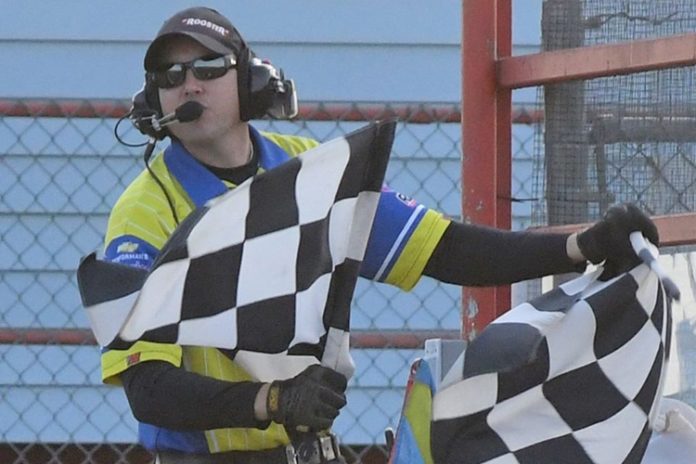 Scott Hixon took another road in racing a bit opposite of his dad, but he is a major contributor to the sport.  ‘The Rooster’ as he’s affectionately called, spends three nights a week out there high above the frontstretch helping keep order on the speedway.

Hixon agreed to be part of the exclusive Dirt Track Digest Behind the Scenes series and it’s time to get to know him a little better.

Scott Hixon: “My father, Greg Hixson, was racing before I was born. Have been going to racetracks since I can remember and I’ve been hooked ever since.”


DTD: What are you doing at the tracks you are currently at?

SH: “Currently I am head starter at Brewerton Speedway, Land of Legends Raceway and Utica-Rome Speedway.”

SH: “I assist the race director with making judgement calls with race operations, watching for safety concerns on the track and on the cars. Using flags to signal drivers with the start/end of the race, lap counts, and slowing the field down with the yellow flag.”

DTD: What is the favorite part of the job?

SH: “The adrenaline rush of the cars going past at full speed.”

DTD: What is your least favorite part of your job?

SH: “Making a call that can be a controversial issue. They are few and far between, but those conversations with drivers along with the Race Director can be difficult. I am glad to work with three tracks that I know the Race Director as well as management have our backs at all times. Officials are human and can be subject to mistakes, and that is my least favorite part.  It is always in the back of my head of possibly making the wrong call.

SH: “I am a fan of the racing itself, watching a good race between great drivers at all three tracks is what keeps me a fan of this sport.”

SH: “I started at Paradise Speedway in 2001 as a corner flagger for karts, motorcycles and Micro Sprints and moved into the head starter in 2003. I have a total 17 years of experience on the flag stand. Tracks I have flagged full seasons at: Brewerton Speedway, Land of Legends Raceway, Utica-Rome Speedway, Black Rock Speedway, and Paradise Speedway. I was the Guest Starter with the Patriot Sprint Tour at Eriez Speedway and with The Empire Super Sprints at Selinsgrove Speedway.”

SH: “Being on the flag stand and giving my dad his last checkered flag of his career in Sportsman.”

SH: “Anytime I see a driver injured is always a tough night.”

SH: “Any race track is like a second home for me. It’s just like the feeling as drivers put helmet on, everything in life sort of fades away and they live in the moment. It’s the same feeling I get when I climb those stairs and put a headset on.”

SH: “Yes. My dad and uncle both raced and it was a whole family affair when I was younger. Now that they are retired from racing cars, they have stayed involved with officiating which in turn got me involved in the backend of racing as well.”

SH: “I remember a story that my grandmother noticed I was watching the flagger more than the races when I was around four or five-years-old. She made some dowels with felt squares to have me mimic the flagger, which made me very interested in the job itself. After she passed, it was then my grandfather’s support to reach for my dreams.”