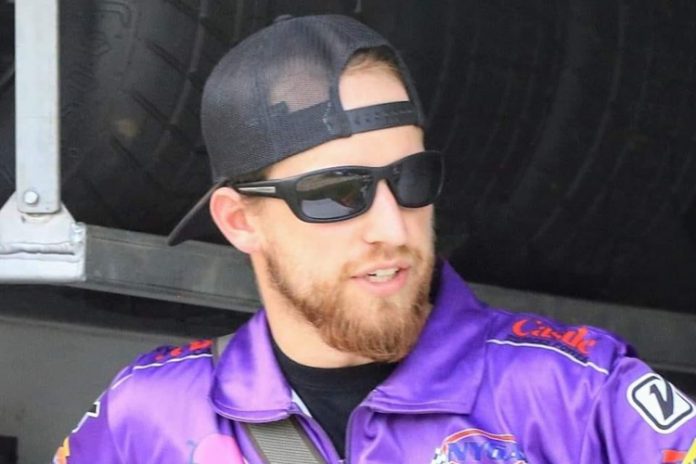 Alex Borland has gone from a local photographer into a dream job in racing in a relatively brief length of time.

His new venture will bring racing to fans throughout, not only the Northeast, but the entire nation.

Alex graciously accepted the Dirt Track Digest’s invitation to be part of this exclusive Behind the Scenes series to recognize those that usually don’t receive any time in the spotlight.


Alex Borland: “Five or so years ago one of my friends started a motorsports media website. I had just gotten my first DSLR camera and wanted to get into photography. From there, I started doing photography at tracks to help provide coverage for our site. My first year was just at Oswego Speedway every Saturday, but my coverage slowly grew year after year. I covered about 65 races as a photographer in 2019.”

DTD: What are you doing at the track?

AB: “I’m a track producer for DIRTVision. I work primarily with the World of Outlaws Morton Buildings Late Models.”

AB: “My job is to travel from race track to race track, set up a broadcast, test it with our studio operator in Concord, NC before the races start, run a broadcast of the race, tear down, and travel to the next track. During the race, I’m a one man band. I run a video board, graphics, audio, and do on the spot troubleshooting. My setup is put up three POV cameras, running fiber cables throughout, hook up the announcer’s audio, timing and scoring information, and our manned camera feed back to my production van.”

AB: “Running the broadcast during the race. It’s what viewers see on their computer screens at the end of the day, and it’s the part I take the most pride in.”

DTD: What is your least favorite part of your job?

AB: “There isn’t really one aspect of my job that I dislike or loathe doing. If I had to pick one, it would probably be  tearing down my broadcast setup at the end of the night. I’m usually incredibly tired after the final checkered flag flies and I’m ready to go home or back to the hotel and end my day, but I still have another hour or so to tear down before I can leave the track.”

AB: “I’m still a fan. I think I’ll always be one, whether I’m working in the sport or not. It’s not difficult to be a fan while working in the industry. I noticed that I’ve gone more toward just wanting to see a good race overall than wanting a specific driver to do well.”

AB: “On the local scene, I shot at tracks for about five years. Over that time I’ve shot at so many tracks. Oswego, Brewerton, Weedsport, and Utica-Rome were my most frequent visits, but I also worked races at several other tracks in the area including Outlaw, Thunder Mountain, Fulton, and more.”

AB: “There are so many memories. I’ve had so many nights in the infields of Brewerton and Weedsport where it felt like I was spending more time joking with and trading stories with Mike and Joe Johnson, Jay Fish, Brian Nacewicz, and others instead of taking photos. Those are the nights I’m sure I’ll look back on. I’m thankful to call those guys really good friends.”

AB: “I really don’t have any bad memories from racing. I think my toughest ones are the nights where I left the track incredibly dissatisfied with my work.”

AB: “The easy answer is that it pays my bills now. I wanted a job in racing for years, now I have one, and I love what I do. Getting up in the morning, going to work a job I really enjoy with a bunch of great colleagues makes it easy.”

AB: “No. My parents were NASCAR fans and used to go to local tracks periodically, but not all too often.”

AB: “My biggest influences in racing are definitely some of my photographer friends that I’ve made along the way. Guys like Mike and Joe Johnson, Jay Fish, among others. I like to think my photographic style is a mix between all of those guys. I have a lot of respect for them, learned a lot from, and think that always showed in my work.”