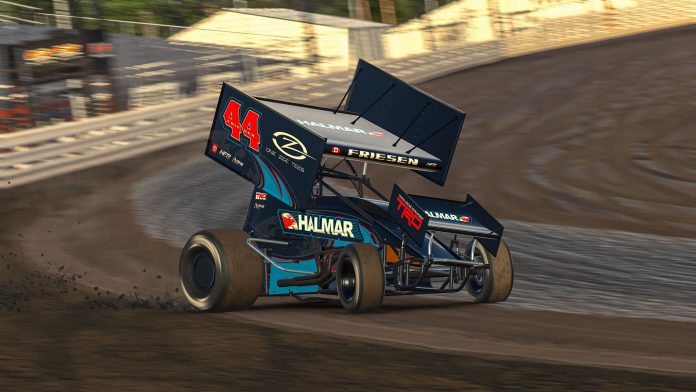 BREWERTON, NY – The Dirt Track Digest Lockdown Showdown presented by SprintCarUnlimited.com is not just about the iRacers, it’s also about Northeast racers who are ready to go up against the best iRacing has to offer.  These drivers are the invitational drivers and will be competing for one of a minimum of the 10 spots reserved for them in Saturday night’s finale program for the Lockdown Showdown.

Stewart Friesen leads the Northeast contingent.  The 2019 Fonda 200 winner is quickly getting up to speed with the Sprint Cars in iRacing.  The Gander Outdoor NASCAR Truck Series regular will be looking to find his rhythm to work his way into Saturday’s program with his Halmar-Friesen Racing ride.

Fulton Speedway champion, Larry Wight, is set to compete in this event as well.  The Phoenix, N.Y., driver not only races the Modified, but competes in numerous events with the 360 Sprint Car with the Empire Super Sprints.  Wight hopes that success on the Central New York circuit translates to iRacing success this week.

Joining Wight is another driver with Sprint Car experience, Mike Mahaney.  Mahaney has made the nationally televised FS1 broadcast done by the World of Outlaws racing with the Late Models.  Mahaney has been practicing at Knoxville in preparation for this weekend’s event as he tries to race into the Saturday finale of the Lockdown Showdown presented by SprintCarUnlimited.com.

Brewerton Speedway is represented by Chris Hile and Andrew Ferguson.  Hile, a winner at Brewerton in 2019, is ready to take on the best as is fellow Central New Yorker Ferguson.  Both drivers are coming into their own on iRacing and have been turning laps to prepare for the Lockdown Showdown.


Albany area Modified drivers Demetrios Drellos and Bobby Hackel will take on the talented field of iRacers this week.  Drellos, a regular with the Super DIRTcar Series, scored his first win with the series in 2019 at Albany-Saratoga Speedway.  Hackel, who competes weekly at Albany-Saratoga Speedway, is a stout competitor on iRacing as well as having some real Sprint Car experience in his career.

The Short Track Super Series is represented by Middletown, N.Y., driver Anthony Perrego and Delaware native Kevin Sockriter.  Perrego is a former champion at the Orange County Fair Speedway and he’s ready to test his talents against the best iRacing has to offer.  He lines up with fellow Modified driver Sockriter.  Sockriter is always strong when he hits the track in Delaware.  He’s scored numerous wins in his home state including last season at Delaware International Raceway.

Ryan Susice, a perennial winner in Western New York, is excited for the chance to test his talents this weekend.  Susice owns numerous track championships while scoring multiple wins each season.  The Ransomville, N.Y., pilot will carry the flag the Niagara region.

The Pennsylvania Posse is led by Fayetteville, Pa., driver Lance Dewease.  Dewease is new to the iRacing, but is quickly getting up to speed.  Dewease has won just about everything there is to win in Central Pennsylvania during his career now he’ll be for some iRacing accolades.

Dewease is joined by experienced iRacer Brett Michalski.  Michalski is stout in the 410 Sprint Car as he competed regularly last season at the Lincoln Speedway.  He was a Lincoln Speedway victor on June 8.  Michalski is coming off a second-place finish with the World of Outlaw NOS Energy Sprints Cars on Tuesday night.

Along with Dewease and Michalski, 410 Sprint Car regular Joe Kata is set to compete. Kata makes the weekly trek from his Goshen, N.Y., home to Pennsylvania to compete against the best Central Pa has to offer.

Two of Late arrivals to the scene who have come on board recently include CJB Motorsports driver Brent Marks and Knoxville Speedway regular Austin McCarl.  Marks is relatively new to iRacing while McCarl is a veteran iRacer.  McCarl was the 2018 Knoxville Raceway track champion and is always strong on iRacing.

Another winged regular committing to the event is Jordan Poirier.  Poirier represents the Lucas Oil Empire Super Sprints as well as the Quebec region. Poirier is the nephew of former ESS champion Steve Poirier.  Proving to be a solid understudy he’s scored several ESS series wins of his own.

The ‘Honey Badger’ Sammy Reakes IV is slated to compete alongside Poirier.  The Fulton, N.Y., driver is a former Patriot Sprint Tour champion.  Reakes has entered numerous iRacing events in the last few weeks showing speed and a knack for running up front.

Matthew Henninger, founder of Wicked Cushion, was also added to the invitational field.  Henninger supports numerous iRacers with his Wicked Energy brand.   Henninger also was the primary sponsor on the Kasey Kahne Racing No. 9, which was driven by team owner Kahne and James McFadden last season.

All these drivers are ready to compete against some of the best iRacers in the country.  They’ll be split into Thursday, April 9 and Friday, April 10 qualifying groups.  They’ll home to make their respective DIG Race Products A-Main each night in order to get enough points to lock into Saturday.  At least 10 of them will transfer into Saturday’s DTD Lockdown Showdown presented by SprintCarUnlimited.com finale.

The Lockdown Showdown presented by SprintCarUnlimited.com is an iRacing event being held on the virtual Knoxville Raceway. It will be broadcast on the Dirt Track Digest Facebook page for FREE each night starting on Thursday, April 9 at 8 p.m. The second night of qualifying takes place on Friday, April 9, again at 8 p.m., with the Lockdown Showdown finale going green at 7 p.m. on April 11. The best iRacers in the country are taking on the some of the best the Northeast racing scene has to offer.

Stay tuned to Dirt Track Digest as well as our Facebook page for the latest developments for the first ever Lockdown Showdown.  Check out SprintCarUnlimited.com for the latest in the world of Sprint Car racing.

Dirtrackdigest.com is the number one source for big-block Modified racing news while also providing coverage of Northeast and national sprint car and late model racing. The site offers free content from award winning journalists and photographers. You can visit us online at www.dirttrackdigest.com or via the DTD App, available in the Google Play store on your Android device. If it’s on Dirt, it’s on Dirt Track Digest.

DirtDigestDigest.TV is a growing source of content for live pay-per-view action of several Northeast based events. DirtTrackDigest.TV offers broadcast from a wide variety of tracks and touring series from Central New York and around the Northeast. Visit us online at www.dirttrackdigest.tv for a complete upcoming broadcasting schedule or download our App for your Roku or Fire device.