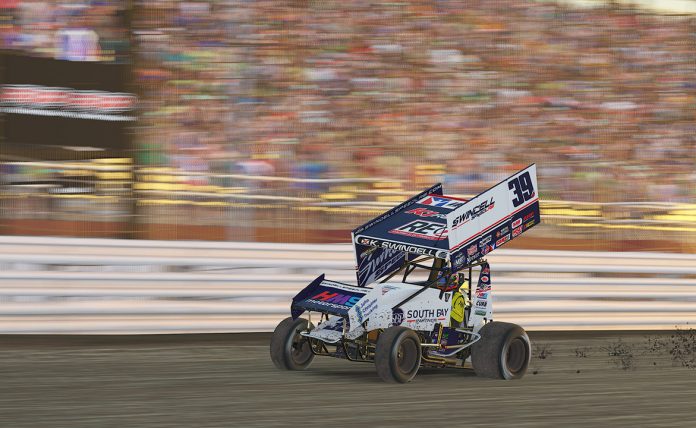 Kevin Swindell stole hearts by getting his first World of Outlaws NOS Energy Drink Sprint Car iRacing Invitational win at Knoxville Raceway — the track where his racing career ended when he endured a spinal injury in a 2015 crash. Then, in the second half of the doubleheader, Corey Gordon smoothly powered his Drydene-sponsored car to victory in the World of Outlaws Morton Buildings Late Models iRacing Invitational, holding off the field on a green-white-checkered finish.

The hand-picked group of 21 elite drivers in the World of Outlaws NOS Energy Drink Sprint Car iRacing Invitational field were lined up by average iRacing times and an eight-car invert. Swindell had the fastest average time and would have started on the pole, but with the invert, found himself starting eighth.

Polesitter Brian Brown, a former Knoxville Raceway champion, and Pennsylvania Posse member Robbie Kendall swapped the lead early in the 35-lap Feature, but the hard charging duo of Kyle Larson and Swindell were rapidly moving up the field.

Larson slid into second by Lap 5 and put the pressure on Kendall for the next five laps. With Brown in third and Swindell in fourth, you could throw a blanket over the top four cars as they battled feet apart and side-by-side each corner, arguing over position.

Logan Schuchart spun sideways on the track, bringing out the caution on Lap 10 and as he rolled backwards down the slight banking, he collided with Brown, taking him out of the race. The 2019 Knoxville Raceway track champion’s misfortune moved Swindell up to third.

On the restart, Swindell snuck his way by Kendall and Larson to take the lead. He held it for the next five laps before Larson worked the bottom to run Swindell down and charge his way to the lead.

Swindell was not going to be denied another victory, though. He contended for the win in the previous three Sprint Car Invitationals but didn’t have a set up that could close the deal. He did now.

The Bartlett, TN driver never let Larson get comfortable. He kept inches between the font bumper of his #39 car and the rear of Larson’s #57 car. Every corner he reminded Larson he was there, diving underneath him, waiting for the NASCAR star to make a mistake.

Larson was flawless, but with eight laps to go Swindell found enough grip around the bottom of the track to jolt ahead of Larson for the lead off Turn 2. The next time around Larson slid out of the groove and hit the wall off Turn 2. He bounced off the wall and collided with oncoming traffic, boggling up the field and forcing drivers to make split second maneuvers to avoid a collision. While the field situated itself, Swindell pulled away to a two-second lead.

Christopher Bell, who won last week’s Invitational on FS1, moved into second, but had nothing for Swindell, who led Bell, Austin McCarl, Bill Balog and Logan Schuchart across the finish line. Kyle Larson wound up sixth, Bubba Wallace was 15th and two-time Indianapolis 500 winner Juan Pablo Montoya was 17th. It was the first World of Outlaws iRacing Invitational for both Montoya and Wallace, who was racing from the FS1 studio.

Using custom hand controls on his steering wheel to throttle and brake his virtual Sprint Car, an elated Swindell cruised to redemption at Knoxville Raceway, and celebrated his win with a spectacular display of donuts – mostly on his side – in Turn 1.

“It was awesome,” Swindell said. “The last couple of these I led laps. I kind of choked last night on DIRTVision. I didn’t get my car near tight enough and let Logan (Seavey) kill us. I learned a little bit there and learned not to make that mistake tonight and I think that played into it.”

While broadcaster — and NASCAR Hall-of-Famer — Jeff Gordon lauded Swindell’s smooth driving around the bottom and middle of the track all night long, Swindell talked about the real-life challenges he faces trying to run such as smooth race.

“With the way the hand controls and stuff, I can’t hustle very well as I could when I could use my feet,” Swindell said. “It makes it a little tougher. It really forces me into a situation where I can be smooth and most times I have to shy away from the top anyway. So, I’ve learned that. I wish I had a little better throttle and I could do a better job. I still struggle with it a little bit. But tonight was good. I was pumped that I drove away like that.”

Corey Gordon certainly did his best to drive away in the World of Outlaws Morton Buildings Late Model iRacing Invitational. The last time the white-and-black Drydene Performance Products car was in Victory Lane earlier this year, Chris Madden was the driver talking in the post-race interview at Vado Speedway Park in New Mexico. But after Wednesday night’s iRacing Invitational, Gordon was the winning Team Drydene eSports driver, talking to FOX Sports 1’s Adam Alexander after holding on during a green-white-checkered Morton Buildings Feature finish in the virtual version of Madden’s real-life car.

Believe him when he said it, because Gordon was forced to fend off a star-studded field of hungry drivers behind him for 40 laps around the virtual half-mile Knoxville.

At the drop of the green, Gordon raced down the backstretch from his third-place starting spot and threw it hard into Turn 3 underneath polesitter Bobby Pierce — who had unreal struggles when weather cut the power to his house shortly before the event started, turning back on just in time to race — in a big slide job to take the lead out of Turn 4. Pierce tried to come back at him on the inside as the field swept back around Turns 1-2, but he was unsuccessful.

Gordon hustled down the backstretch and immediately put some distance between he and the rest of the field. Hugging the low line around the inside berm for much of the 40-lap contest, Gordon opened up a 1.5-second advantage on Pierce by Lap 12 and was beginning to run away with it a bit.

A caution at the halfway mark erased Gordon’s lead and stacked the field back up. Kaeden Cornell and Logan Seavey got terrific jumps on the ensuing restart and zoomed by Pierce on the low side. Pierce drifted back even further as the race wore on, winding up with a solid eighth-place run after the freak start to his night.

As the race crossed into the final five circuits, Cornell was in the midst of chasing down leader Gordon and came up on the slower car of Cruz Pedregon out of Turn 2. They ended up making contact, but Cornell saved it and only lost one spot to Nick Stroupe. For the restart, a green-white-checkered situation awaited the field.

But when the green waved for the final time, the pressure from behind was no match for Gordon’s ice-cool composure as he powered out front of Stroupe, Cornell and the rest of the field back around to the checkered flag for his first Morton Buildings Late Model iRacing Invitational win.

“I hated to see all those cautions there at the end, but it was a great race,” Gordon said in the post-race interview. “I got out front, set my own pace, and I like them slick racetracks.”

“That was a good time,” Wallace said in the post-race interview. “I’ve always liked dirt racing. Ever since iRacing came out with it, that’s like the most races I would run. I haven’t been on it in a really long time and it showed tonight.”

Last week’s Late Model winner on FS1, Trent Ivey, did not have the same strength on Wednesday night as he did in the win at The Dirt Track at Charlotte, but seemed to have made a good iRacing buddy in Wallace by the end of week two.

“Shout-out to Trent Ivey for his setup and actually some help yesterday,” Wallace said.  “I ran some laps with him and his guys to get me dialed-in. I didn’t make any laps in a Dirt Late Model until 30 minutes before action tonight and that definitely showed. I had a lot of fun in the Sprint Car, but once I started figuring out the Late Model, it was a good time.”