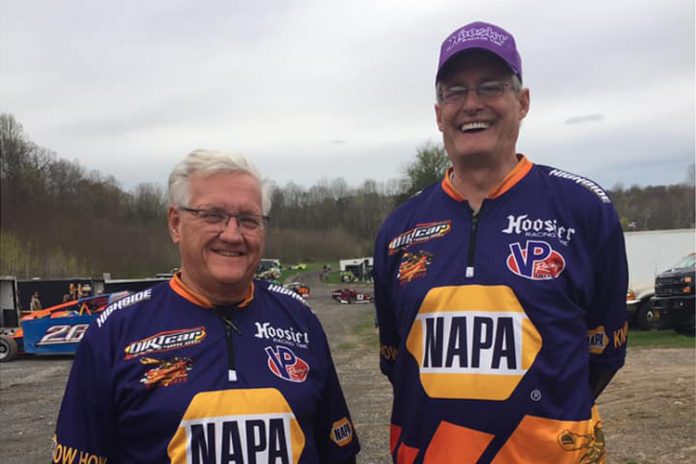 Dave Medler has been around racing since his very early years on this planet.

He has memories that many of us can only imagine and he now is a major contributor to the social media success of the Brewerton and Fulton Speedways.

As part of the exclusive Behind the Scenes Series for Dirt Track Digest, it’s time to meet Dave Medler.


Dave Medler: “My dad took me to my first race when I was eight-years-old and it just happened to be the first race Rolling Wheels ever had in 1969.”

DTD: What are you doing at tracks you are at?

DM: “I am Public Relations-Social Media Director at the Fulton and Brewerton Speedways as well as for Gypsum LJL Racing.”

DM: “The people and all the friends I’ve made along the way.”

DM: “Policing our Social Media pages. Constructive criticism and suggestions are welcome. Some fans can be pretty vicious that goes beyond racing and into personal attacks. The good people far outweigh the bad.”

DM: “Not hard at all. The ones with the tough job are the race director and whoever is in the flag stand.”

DM: “I never really counted. As a kid I was a glorified mud scraper as I felt like a big deal at that age. I was involved with Fire on Dirt (original DTD), Gater Racing News and the positions I hold now at Brewerton and Fulton.”

DM: “My first race is still in my mind like it was yesterday at eight-years-old. The speed and the noise had me hooked instantly. Canadian Terry Edwards won the first ever feature ran at Rolling Wheels in 1969 that day. I remember George Ely flipping what felt like the entire length of the back straightaway.

“Every weekend starting on Friday night through Sunday, all of us kids would lineup where the cars came into the speedway. In those days the drivers were bigger than life and all the cars had that ‘wow’ factor because they came to the track on an open trailer and ramp trucks were like today’s stacker haulers.

“Jack Johnson being the first New York driver to win on Sunday during Super DIRT Week and the noise from the crowd when he drove under the checkers and when he got out of the car was deafening.

“Pat Ward winning the Outlaw 200 at Fulton Speedway after so many years of trying. The emotion from Pat, crew and family that day is something you don’t forget.

“Could sit here all day with the rivalries I have seen in 50 years, I’m sure more will come back to me I wish I mentioned.

“It gets said all the time, but it is true, it all comes down to the friends made over the years, some still with us, some not. It really is a family and I wouldn’t trade it in for anything.”

DM: “It gets in your blood and you’re hooked for a lifetime.”

DTD: Who influenced you in regards to racing?