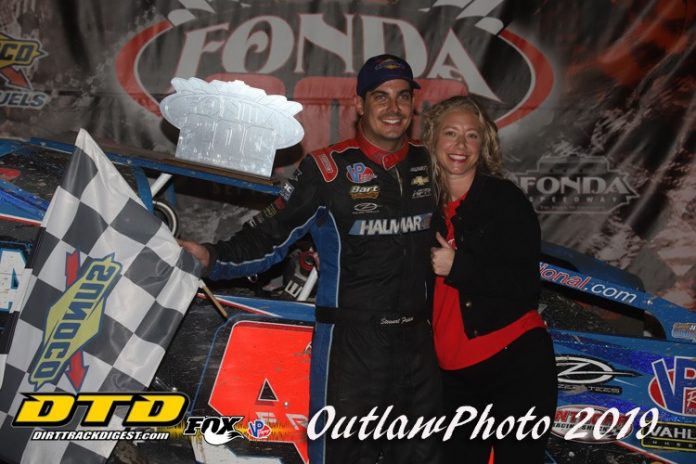 Melissa “Mimi” Lazzaro has been seen most recently on Dirt Track Digest TV with commentary and victory lane interviews from Florida’s All Tech Speedway during the Short Track Super Series Sunshine Swing.

However, she has long been involved at the Fonda Speedway and with Modified racing in general.

She is the latest member in the Behind the Scenes exclusive Dirt Track Digest series as she graciously talked about her life in the sport.

Melissa Lazzaro: “I was born into it. My father raced for many years up and down the east coast from the 1950’s to 2000 when he passed. I was born at later time in my father’s life so I unfortunately missed the times when he was on top of his game. I have very fond memories from my childhood when he would win. People loved him; it was great.”

DTD: What are you doing at tracks you are at?

ML: “I’m at Fonda every Saturday. I am the victory lane announcer/coordinator and I also sing the national anthem.”

ML: “When a driver wins a race they come to victory lane in front of the grandstands to celebrate which is where we do an interview through the PA before they take photos.”

ML: “Being in the moment with the driver and team after winning a race. There’s some real emotion in those moments.”

ML: “Other than when I mess up talking during an interview, I love what I do!”

ML: “I am a huge fan of racing and it’s the main reason I love doing what I’m doing. Racing is a huge passion of mine!”

ML: “Most of my fondest memories are from when I was a child and I’d stand in the infield at Fonda and dad would make sure to wave to me on the white flag lap before every feature.

“Riding with dad to and from the races. Fans would line up when we pull into the track and we were already one of the last teams to leave.

“I will also never forget the times I got to sing the national anthem at the mile at the NYS Fairgrounds.”

ML: “The toughest memory I have is when I lost my father after a race from a stroke in 2000.”

ML: “Racing has been a huge part of my life since I was born. It’s a passion of mine. I love it! Doing interviews is a lot of fun for me!”

ML: “Yes! Oddly enough I have racing on both my father’s and mother’s side of the family. Obviously my father raced for many years as did a couple of my relatives and my mother brought me with them to every race as a toddler. When they separated I would throw a fit if I wasn’t at the races with him so over the years we arranged rides for me to and from Fonda each week. My mother lived in Schenectady and my father lived in Utica. I went to school in Schenectady. I rode with my aunt Diane for a while. Then with my father’s old sponsor Mike McKeon, or George Biancosino, or Danny Marrone. Sometimes I’d ride home to Schenectady in the old Jumpin Jack’s part truck with Ronnie who would take me home. Some nights we didn’t know who was going to take me home, but someone always did. Wow! That took me back a little bit!”