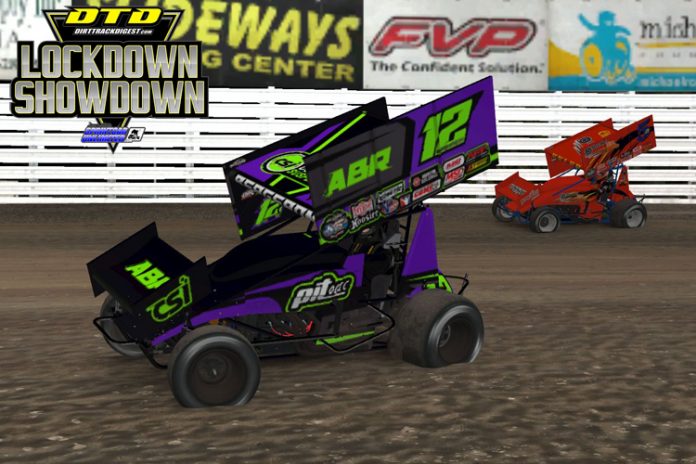 Alex Bergeron lived up to the hype on Saturday night in the first ever Dirt Track Digest iRacing Lockdown Showdown presented by SprintCarUnlimited.com at the virtual Knoxville Raceway.

Bergeron, of Drummondville, Que., was stalked the entire race by Thursday night winner Braden Eyler.  The duo swapped the lead numerous times before Bergeron wrangled the spot from him one last time with only a handful of laps to go to score the win and the $200 payday in the Dig Race Products 35-lap A-Main.

“This definitely means a lot,” state Bergeron after winning the Lockdown Showdown.  “Especially with what is going on in the world right now.  To be able to win these big races is very important for the stats, our team and myself.  I’m proud of what we achieved this week as a team and myself.”

The pole position belonged to Richie Preston by virtue of his win in the final heat race.  He quickly bolted to the front at the green while Bergeron moved from fourth into the runner-up spot.

Preston led the race into turns one and two on the second circuit, but Bergeron wasn’t happy with second and bolted by him on the bottom as they raced down the backstretch.


Preston chased Bergeron for a few laps before he felt the wrath of Eyler.  Eyler made his run to the outside and secured second just prior to the only caution of the feature on lap six.  Jesse Dakus came down the speedway in turn four coming together with Mason Hannagan causing him to spin.

The race restarted on lap 10 with Bergeron and Eyler beginning their duel.  Bergeron ran the low side with Eyler trying the middle and the top.  Bergeron elected to move to the outside a few laps later allowing Eyler to make a run at him.

Eyler got his first taste of the lead on lap 14 as he used a slide job in turns one and two in order to secure the top spot.  A lap later they remained together with the pair racing down the backstretch side-by-side.  Eyler just beat him to the line when they came off of four.

They stayed stuck together as they continued on with Eyler just keeping the top spot after exchanging multiple slide jobs.  He kept it until the 21st circuit when Bergeron was able just sneak in front of him at the start-finish line.

Eyler regrouped and continued to apply pressure.  They continued to run along-side one another all the way around the race track until Bergeron was able to use another slide job on lap 23 to solidify himself at the leader.

“It was a nice battle with Braden there,” cited Bergeron.  “I was running the bottom and I had to change my line a couple times.  I finally figured out the right line to run there and we were able pull away at the end.”

Nine laps were left when Bergeron hit traffic for the first time. By this point Eyler remained close, but Bergeron had enough space to make the moves necessary to keep the lead.

Bergeron was unflappable in traffic with Eyler searching for bite.  He knew he couldn’t run the same line so that forced him to move around on the race track.

As Bergeron and Eyler raced away, Brett Michalski found his rhythm and moved into third with three laps to go.  He final disposed of Billy Rowlee and Kevin Loveys for the position.

As the checkered flag flew it was Bergeron winning by just over a half of a second.  Eyler, of Franklin, Pa., put up a valiant effort only to come up just short at the conclusion of the main.

“That was fun,” said Eyler.  “I kind of beat him to bottom out of two there and then he got in front of me.  I missed it that one corner and we stayed about even the rest of the race.  He always drives a good race and raced me clean like usual.  It was a really fun.”

Michalski, a Pennsylvania Posse member, was happy to finish third behind two of the best iRacing has to offer.  Michalski made some moves when he had to in order to put himself on the podium at the end of the night.

“Those two guys, congratulations to them, they are in their own league,” said Michalski.  “I can get it done in the real stuff, but man, this iRacing stuff is a lot of fun. They know what’s going on.  I’m just trying to practice at it.”

Stay tuned to Dirt Track Digest as well as our Facebook page for the latest about the upcoming Confinement Classic.  Check out SprintCarUnlimited.com for the latest in the world of Sprint Car racing.