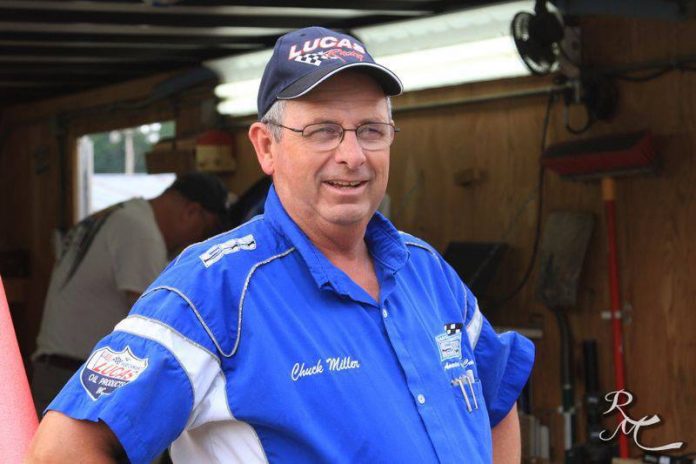 Ever since the early days of the Empire Super Sprints there has been one constant…Chuck Miller.

Decades later he continues to be a key cog in the wheel of success for the traveling Sprint Car group.

Chuck is the latest loyal supporter of the sport to participate in Dirt Track Digest’s exclusive Behind the Scenes series.


Chuck Miller: “My father was a race fan when I was younger, but by the time I became interested in it he no longer was interested. However, my mother’s grandma Miller lived across the street from the Gioia’s (Supermodified family) on East Tenth Street and that was my in initially. I’d get dropped off at either gram’s or the track on Saturday night and would sleep over at gram’s after the races. I grew up a Jim Shampine fan and by high school the friends I hung out with became involved with Steve Gioia’s team that included future and current brother-in-law Kevin Lyons who followed his dream of competing in the Supers.

“During my high school years I picked up a 35mm camera and began shooting while attending both dirt and asphalt racing. In the early 80’s while working for Stone and Webster at Nine Mile Point (nuclear plant) I was transferred to a facility in Southern Ohio doing graphic arts and photographic work. While there I began attending dirt Sprint Car races in an around the state and started shooting for the racing trade papers. I became a card carrying photographer for Speedway Scene. I traveled back and forth to Oswego when time allowed.

“During my time in Ohio, ESS came into existence back here in Central New York and upon my return home in ‘85 I pursued a photographer’s position with ESS coming on board the same time as incoming President and Race Directory Dick Carbery. That’s how I got here with ESS. Started out year one as a photographer and by year two I was doing pre-race and post-race public relations and results. From there I began picking up other behind the scenes aspects. With my graphics background I finalized the original ESS logo design and the current Lucas Oil ESS shield logo. Many hats have been and had to be worn with the limited volunteer involvement. Working side-by-side with Carbery we slowly grew ESS’s credibility in the Central New York Modified hot bed.

DTD: What are you currently doing? Explain that to a person who has no idea what racing is about.

CM: “Currently as President and Race Director I handle statistical and promotional materials for our series. At the track I start out working up rosters for media members for those in competition. From there I provide statistical materials to track announcers other than our traveling announcer with information such as winners, points etc. I’m also responsible for lining up the night’s events involving ESS. During the racing I officiate our activities and score the events as they take place. Afterwards I post results, get results to our pay off personnel and then begin to update the points and other statistical material. While on the road this is finished in our hotel room while near home it is done prior to going to bed. All materials are updated and sent to our webmaster.”

CM: “Meeting people. I’ve always been able to meet and befriend along the way. Also getting to go the places and do things at tracks and on the road that many never get to do.

DTD: What is the least favorite part?

CM: “The long hours updating materials or getting ready for our events. A well run program doesn’t just happen on its own.”

DTD: Can you still be a fan while doing what you do?

CM: “I am a fan and have favorites and friends, but when the racing starts everyone is treated equally. I like to see different winners, but what I like best is great racing and a well run program.”

CM: “The best memories are taking ESS to Knoxville/Eldora/Limaland, working with Tom Schmeh and the Tournament of Champions in conjunction with the National Sprint Car Hall of Fame and Museum along with our involvement with URC promoting our Challenge Series events and our involvement in growing the Canandian Sprint Car Nationals at Oshweken Speedway.”

DTD: What are some of your least favorite memories?

CM: “The toughest moments are when John Zentner died as the result of an accident at McKean County Fair Raceway and most recently the whole Kevin Ward Jr. incident involving Tony Stewart at Canandaigua.”

DTD: Why do you keep doing it?

CM: “I guess I continue doing it because I’m too stupid to walk away from it, but I’m very proud of what ESS has become in being recognized as a major player in 360 Sprint Car racing today.”

DTD: Who has influenced you the most?

CM: “I’ve looked up to and learned from many over the years in all facets of the spot, but it was Dick Carbery’s encouragement and drive in building the integrity of the series that sticks with me to this day. For that I am very thankful. I’m not an up-front or out-front look at me kind of person. I do what needs to be done. When called upon I have stepped in the handling unexpected situations that can arise.”