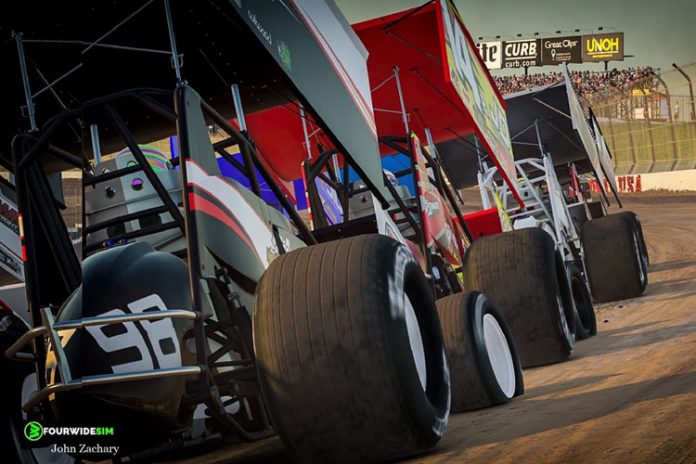 SYRACUSE, NY – With the success of the first King of the Quarantine 40 iRacing event for the Lucas Oil Empire Super Sprints (ESS), the second running of the event will be this Sunday, April 19th at 5PM. The event will be run on the virtual Dirt Track at Charlotte Motor Speedway, the home of the World Finals.

Drummondville, Quebec’s Alex Bergeron just edged Jake Karklin and Bryce Bailey in the first event held at the Eldora Speedway. Bergeron, who is the defending World of Outlaws iRacing Champion, took home $95 from the $375 purse that was offered.

The first event pitted iRacing stars against ESS stars and other motorsports personalities and drivers. 2019 ESS champion Paulie Colagiovanni was in the field as was Billy VanInwegen, Jordan Poirier, Brett Wright, Kelly Hebing, Sammy Reakes IV and others.

This Sunday’s field has been increased by 10 more entrants and with some big names in local dirt track racing at the ready such as Brent Marks, Larry Wight, Davie Franek, Jimmy Phelps, Chris Hile and Ryan Harrison from the United Kingdom.


The second running of the King or the Quarantine 40 has a $500 purse with $100 going to the winner. The top seven finishers in the 40 lap A-Main will receive money as well as many other special bonuses. There will be one final event on April 26th which will be the King of the Quarantine Nationals held at the famed Knoxville Raceway.

Information of how fans can view will be released in the next few days. In the first telecast was watched live by over 400 people and now has been viewed by over 2,000. Adding spice to the live event was the voice of ESS, Mike Mallett.

iRacing Lucas Oil ESS style… King of the Quarantine 40 this Sunday, 5PM, it will be excitement guaranteed!