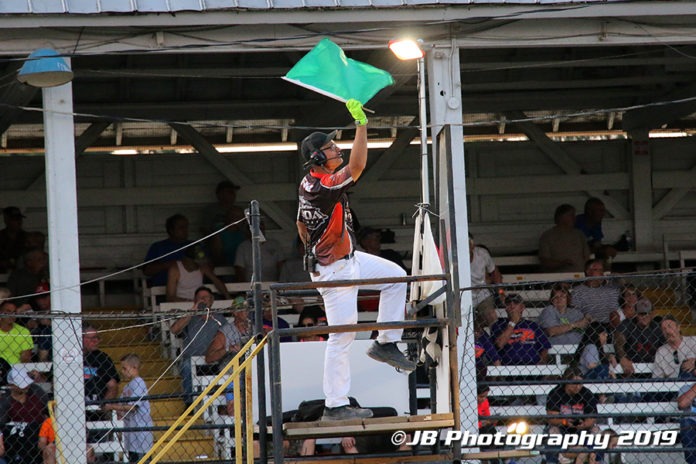 Joe Kriss who not only has the ability to get the racing field running smoothly, but also possesses a rather smooth voice that delivers a high quality rendition of the National Anthem.

Joe is the latest racing person in the spotlight for Dirt Track Digest’s Behind the Scenes series.

Joe Kriss: “My mother brought me to Fonda Speedway when I was four-years-old and I’ve been going ever since. Jim Frye, former flagger at Fonda in 1992, invited me to stand to flag a Street Stock heat (now pro stocks) after seeing me flagging from the bleachers. I had the opportunity to flag a half a season as assistant starter at Fonda in 1994 and in 1997 when Rick Lucia took Fonda Speedway promoter duties, I applied for, and was hired by him and Mary Beberwyk to be their backstretch starter.”

DTD: What are you doing at track you are at?


JK: “I am head flagger at Fonda Speedway, Georgetown Speedway, Glen Ridge Motorsports Park and the Short Track Super Series. From time to time I also sing the national anthem and have sung it at Fonda, Glen Ridge and Georgetown.

DTD: What are you currently doing? Explain that to a person who has no idea what racing is about.

JK: “Basically the ‘on track referee’ along with the other track officials and race director. I make sure all on track procedural rules are followed. I communicate with the drivers through flags and hand signals. I also penalize drivers if on track rules are broken.”

JK: “I have always loved flagging and racing with an avid passion. I started out bleacher flagging at Fonda in turn four when I was six-years-old. Nothing makes me happier than having flags in my hands at the race track. I love flagging a good race with a great finish, side-by-side coming to line like Matt Sheppard and Stewart Friesen in the Firecracker 50.

“I’ve also had the opportunity to meet and work with a log of great and talented flaggers like Dave Farney, Dick Sweet, Bobby Watson, Warren Alston and Larry Woodruff to name just a few. I’ve also had the opportunity to work with the mentor a lot of the up and coming talented flaggers. After all, have to train the new blood so they’re ready to take over if and when the time comes for me.”

DTD: What is your least favorite part?

JK: “Dealing with angry drivers. No matter what the call (sometimes even if you don’t make a call) you make there’s always going to be someone who is not happy about it.”

JK: “I’m a lifelong fan of auto and gokart racing and always will be. Never really had a favorite though so I guess that makes me more apt to judge things objectively. I think it helps do what I do even better. You can’t be a race official just for the money. You have to truly love it and have a passion for it. I have found that the more a fan of race a person is, the better of an official they will make.”

JK: “The phone call from Matt DeLorenzo offering me the head starter position at Fonda in 2015 and when Brett Deyo asked me to come aboard with the Short Track Super Series, Georgetown Speedway and to keep me on board with Fonda in 2019 when he took over the track. As far as races go, the Firecracker 50 at Fonda was an incredible night and being the first head flagger to flag the Fonda 200 since Dick Sweet did it in 2003 was an amazing memory I will always treasure and be grateful for. Both of those races had excellent finishes and it was an honor to wave the double checker over both.

DTD: What are some of the toughest memories?

JK: “When I was on the backstretch one year at Fonda, I had a driver and his crew come up to me at my post after the race, surround me concerning an on track call that I hadn’t even made. Was a little scary at first, but it was diffused by other officials at the scene.

“The night that Rob VanAerenam had a heart attack behind the wheel in a Street Stock feature at Fonda in 2005 and passed away behind the wheel. I saw him being removed from the race car and put into the ambulance, and I never want to experience a moment like that again.”

JK: “Quite simply because I love what I do and there is no better way to spend a weekend in the spring, summer or fall months than being at a race track. This has been what I have always wanted to do since the first time I set foot in Fonda Speedway as a young child. My mother often still remarks that I spent more time watching the flagger than I did watching the races in my formative years. I am quite literally living the dream.”

JK: “My mother has been a life long Fonda Speedway fan and started going to Fonda several years before I was even a gleam in her eye. I believe she started going in the 1960’s. She has had a life long love of racing and I guess that spilled over to me.”

DTD: Who influenced you regarding racing and why?

JK: “Three people in particular. The first was my mother because she was the one that started bringing me to the races and fostered my liking of flagging  by making me my first set of sewn racing flags that I used in the bleachers at Fonda for so many years.

“Secondly would be Dick Sweet whose flagging style, in my opinion, was and remains unparalleled. He taught me a lot about how to flag with style and not just be a bump on the long in the flag stand. The true meaning of ‘being a part of the show without being the show’.

“Third would be Paul Montenaro, the promoter of Dodge City Speedway, who saw me flagging in the bleachers in 1992 at Fonda and approached my mom and myself about flagging at his gokart track. He has kept me on board ever since and he is responsible for me cutting my teeth in the world of race flagging. Any success I may have right now is owed, in large par, to him taking the very first chance on me.”