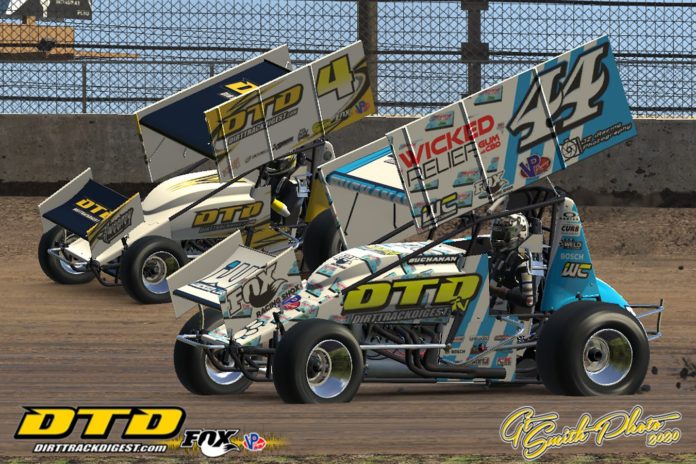 BREWERTON, NY – With the success of the first ever iRacing Lockdown Showdown last weekend, Dirt Track Digest and Dirt Track Digest TV is set for a second round of action on April 23, 24 and 25 at the virtual Eldora Speedway.

Like the Lockdown Showdown, the first ever Confinement Classic presented by Billy Whittaker Cars & Trux features a three-day format with 120 racers competing for chance to move on to the Saturday finale that will have a minimum of $500 purse with the winner guaranteed at least $175.

The format for the Confinement Classic presented by Billy Whittaker Cars & Trux has been changed slightly from the last race.  Points will still be necessary as it will be utilized to shrink the field from 120 down to 60 for the finale.  For this event, it’s how low can you go.  Driver’s finishing positions for time trials, heats and feature will be added up with the lowest scores moving on.  Setting fast-time, winning the heat and the A-Main is worth a total of three points.  The perfect score.  Finishing fifth in the B-Main is worth 25 points and so on.

There is another twist, drivers that finish in the top 10 of the A-Main on Thursday April 23 or Friday April 24 will be automatically entered into the Saturday program with the final positions being determined by points.

Like the Lockdown Showdown, 20 Northeast ‘invites’ are set to compete with a MINIMUM of 10 of them transferring to the Saturday program to allow fans a chance to see the stars they love compete against the best the iRacing world has to offer.


The qualifying nights feature five, 12 car heats races with a B and C-Main to set the feature field with a 25-lap A-Main to cap off the night.  For the finale, six heats will be run with three drivers going to directly to the A-Main.  The rest of the drivers go to one of three 15-lap B-Mains with the top two making it into the finale 40-lap A-Main.

Entries open up on Sunday afternoon at 4pm with the first 95 emails received going directly to the program.  iRacers looking to register can email dtdiracing@gmail.com after the deadline on Sunday.  THE FIRST 95 EMAILS RECEIVED will be registered for the event.  Drivers are asked to include their name, hometown, car number and two sponsors for the announcers on the call.

All entries 95 to 155 will be entered into a special Go to Confinement 25 to be held on Wednesday, April 22 at 9 p.m.  All drivers that do not make the initial entry are invited to compete in that program featuring time-trials, heats and mains with the top five in the A-Main transferring on to the Friday night qualifying program.  For the last event, there were nearly 150 drivers attempting to get a spot.  This will accommodate more entries and allow those late with their emails a chance to make the show.

Full rules will be available in the coming days via DirtTrackDigest.com as well as on our Facebook page.

The entire program will be broadcast live through the Dirt Track Digest Facebook page with racing beginning at 8 p.m. on Thursday April 23, Friday April 24.  The Saturday night program begins at 7 p.m.  The feed features a Dirt Track Digest TV Xtra format with live scoring and in race commentating from Northeast announcers Shane Andrews and Mike Mallett.

Stay tuned to Dirt Track Digest as well as our Facebook page for the latest developments for the first ever Confinement Classic presented by Billy Whittaker Cars & Trux.