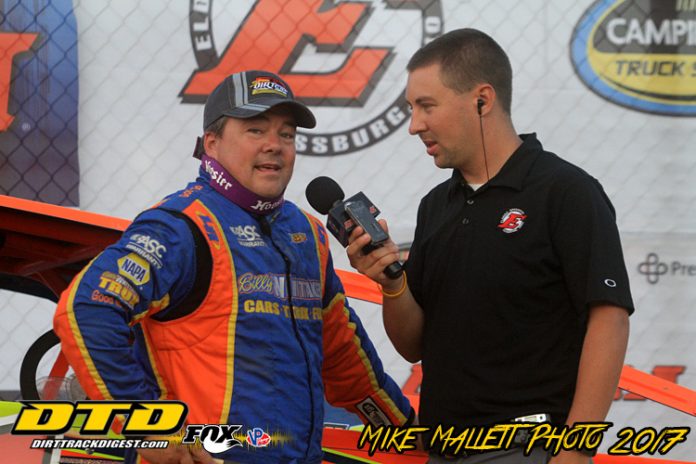 In a surprise announcement on Thursday afternoon Modified driver Billy Whittaker is walking away from big-block racing.

Several times during the winter Dirt Track Digest had reached out to the Central New York automobile business owner inquiring as to his status for the 2020 season.

As of late February he told DTD, “I have not made a decision yet.”

That decision came on Thursday afternoon.


However, just moments after the release DTD reached out to him and asked, “Is there a chance you will be running your small-block?”

He said, “To be determined, but probably. I’m not selling it so it’s a great possibility. Honestly, I will keep the small-block whether I race or not. It is my last car and it will sit in the barn. I am sure that as time goes on that the fire to drive will be there.”

Billy Whittaker has been around Central New York as well as national racing for decades, but after pursuing his dream during which time he had driven Modifieds, Late Models and even spent some time with ASA and USAC.

Looking back Billy said, “I retired the first time in 2004. I wanted to make a living in the sport, but you get to a certain point where it just costs too much money. I couldn’t get to the next level. I raced with guys like Kahne, Newman and Leffler who got there. Ran with Jimmy Paternoster with USAC Silver Crown, but that didn’t work out. So I built an ASA team. During the gap I ran four big-block races for Jim Beachy, but I figured what the heck and ran ASA after that.”

After leaving the sport to start his business he didn’t disappear as he explained, “I helped out Sammy Reakes for a while sponsoring him, being a mentor and crew chief and I was able to get my racing fix that way. I stayed out of driving for quite some time.”

After going through a divorce, he noted, “I needed something to do and I had myself a little more free time and I knew I would want to spend a lot of time with my son as he got older so it was a good time. I also could afford to do it to an extent.”

Continuing he said, “I would have never gotten back into a big-block if I had to own my own car. Corey Reed helped put together a deal with John Wight to run a car by leasing it. I paid for it, but I didn’t own it. I originally thought it would be a weekly deal and race part time, but you know how that went. Mr. Wight didn’t need another driver or team, but I’m thankful for the opportunity that he has given me.”

On Thursday he said, “I was on Facebook and saw memories come up. There were several pictures of my career and I thought this is the perfect time. Coming back to the big-blocks was a lot harder than it use to be. The competition was tougher which meant I had to race more to improve. “

He thanked so many people who have helped him out on his return to the Central New York racing wars and even a full season on the Super DIRTcar Series which saw him capture the invitational win at Eldora with one of the most emotional victory lanes seen in a long long time.

So if you think just because he is hanging up his big-block boots that Billy Whittaker is going ride off into the sunset you would be wrong.

Whittaker said, “We are sponsoring iRacing with DTD and still have a deal for pace cars at Fulton and Brewerton as well as fast time sponsor for the Super DIRTcar Series, sponsoring the Billy Whittaker 200 on Super Dirt Week and will continue to be a major supporter of local racing. Race people are our people and our customers. I made a lot of good friends and been reunited with many of my old friends and it’s all good. I love this sport, but it I just don’t have the time it takes to do it the way I need to do it.”