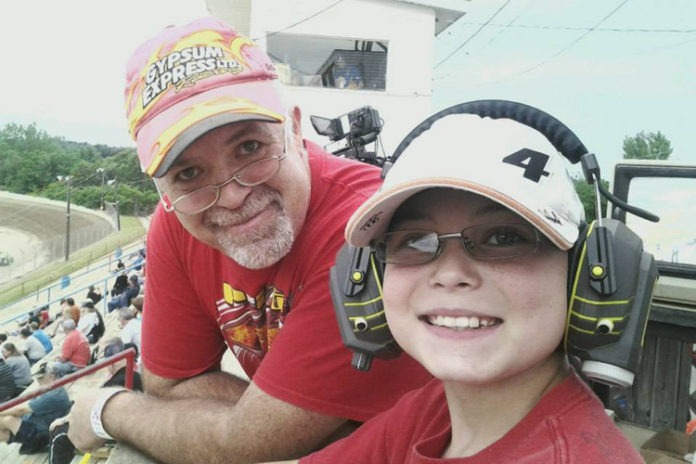 It’s now time for Dirt Track Digest to put Mike Frazer in the Behind the Scenes spotlight.

For years racing fans have heard his name over the public address system as he participates in what has become a very important area in racing…video.

The majority of time he has a smile on his face and his joined by his wife and daughters as he continues to provide a crucial aspect to the spot of auto racing.


Mike Frazer: “I was a fan first. Started going to races at Weedsport and Rolling Wheels in 1990 with a friend from work. Around 1993 I started dating my wife and she went to a lot of races and she introduced me to new tracks and drivers. In 1996, she saw an ad in the paper for looking for people to video for “Talkin’ Racin'” a television show on Finger Lakes Cable produced out of a studio at Finger Lakes Community College. She encouraged me to call and we started working with Jim Fremouw. I primarily filmed weekly races at Fulton Speedway and became good friends with Marcia Wetmore who was race director at that time. The following year, 1997, she offered me a job manning the pit gate at the track and it was great. That year, Mel Thomas asked me if I wanted to help him out filming on Fridays at Ransomville since he was short a videographer. And I have been filming ever since!”

DTD: What are you doing at track you are at?

MF: “Currently I shoot video for Thomas Video weekly at Brewerton, Fulton and Utica-Rome. I also do video at Weedsport Speedway for Weedsport Productions for all of their racing events. I have been fortunate to film for FloRacing, WRG and DTD TV as well. People may think that the video I film is just for DVD sales but that is only a part of it. The video I film weekly at the track also supplies the live feed to the VIP booths,beer booth and announcer’s tower. The weekly video shot at Utica-Rome is the same as you can purchase on DTD TV. Highlights of the weekly video are used for the Smash & Crash video Mel and Matt Thomas assemble yearly. Video footage has been used for footage shown at track banquets and promo videos for the tracks or individual drivers to show sponsors.”

MF: “My favorite part of the job is getting to work will all people behind the scenes. All the track owners and promoters, announcer’s etc. have been great. I have made many friends and some of them are more like my family than my blood relatives.”

DTD: Are you a fan and how hard it it to be one in relation to what you do?

MF: “I definitely am a fan but more so of the actual racing action than a specific driver or class.”

MF: “One memory that will always stay with me is my first date with my wife at Rolling Wheels because my future stepson had an upset stomach and threw up his juice box all over the poor lady in front of us. She was great about it though! Other than that are just getting to spend time with the people at the track after the races.”

DTD: What are some of the toughest memories?

MF: “Worst memories for me are some of the horrible crashes because you get to know the drivers and their families and you really worry about them until you know they are going to be okay.”

MF: “I keep doing what I do because of the people I work with and interact with each week. There always seems to be a point in the season when you want a break and wish for a night off but then I think what else would I do. I can’t imagine being or doing anything else.”

MF: “My family wasn’t involved in racing, I started out as a fan. However now my family is, my wife Pam sells DVDS at the track or spots for me during some events, my stepson attends a variety of races and both of our daughters are with us at the tracks. Our youngest, Mackenzie sells 50/50 tickets at Brewerton and Fulton.”

DTD: Who influenced you regarding racing and why?

MF: “My wife influenced me. She encouraged me (nagged me really) to make that first phone call. Glad she did because there really isn’t any people like racing people.”